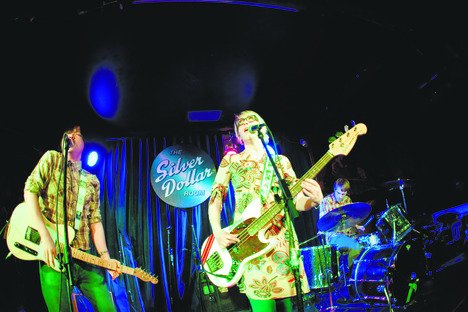 Early in her set, Julie Fader thanked the small El Mo crowd for venturing out into the cold to listen to her “soft rock.” And she did, indeed, keep things – namely her voice and acoustic guitar – very soft, while her large band divined feedback atmospherics from their reverb-drenched instruments.

Mixed with slow tempos and a lack of onstage dynamism, it all got a bit dull, even with Sarah Harmer’s surprise guest vocals on Lullabye. Then the clock struck 12, the crowd sang Happy Birthday to Fader’s guitarist/boyfriend, Graham Walsh (also of Holy Fuck), and Fader pulled out a few surging, trippy rock songs, including a Wintersleep cover and her ominous Skin And Bones, that left a strong impression.

Earlier, Daniel Romano of indie rock outfit Attack in Black and traditional folk band Daniel, Fred & Julie went country-noir with a five-piece band that included his parents on bass and lead guitar. As if that weren’t rad enough, he thickened the sincere, aching tunes with dynamite bluegrass harmonies.

The first sign that Mr. Scruff’s set was going to be special was when Wrongbar owner Nav Sangha told us a few of hours before the gig that the UK DJ/producer had spent all afternoon tweaking the club’s sound system and was planning to play from opening to closing (about 10 pm to 3 am). These days, it’s common for visiting DJs to show up around midnight and play for a couple hours at most, so Scruff’s admirable work ethic got our attention.

Once we were past the huge lineup and in the club, it was immediately apparent that his sound-system pickiness was paying off. Bouncing freely between dusty jazz-funk records and futuristic electronic tracks, he managed to avoid making the former sound tinny and weak in comparison to the latter. And the length of his set allowed for full expression of his eclectic taste, making the jumps between genres and decades seem natural.

It was a welcome reminder that a great DJ night is less about tricks and fist-pumping anthems, and more about playing good songs through a clear, powerful sound system for a crowd that wants to dance.

At his annual Showstorm, this year at the Silver Dollar and the adjoining Comfort Zone, legendary local indie booker Dan Burke offered up his picks for best punk/garage/psych acts to watch out for.

At Comfort Zone, Clues followed a great opening set by locals the Easy Targets by adding a second kit (they use multiple drummers) and a stack of synths to the mix. Since Clues’ material is written mainly by frontman and Unicorns founder Alden Penner, it’s no surprise that their twitchy, arty revolving door of indie pop is in step with the Unicorns’ catalogue. They teased out a loud/quiet dynamic but were best when rocking their full sound to the max.

Back at the Silver Dollar, buzz-worthy local garage punk trio Chang-a-Lang had already launched into their first song. Led by singer/guitarist Brian Okamoto, a dude with serious stage presence and an ear for memorable guitar licks, the band debuted some catchy new tunes that got the Dollar’s dance floor moving. Their strong songwriting, memorable hooks and playful breakdowns made them the night’s standout, and a band to watch in 2010.