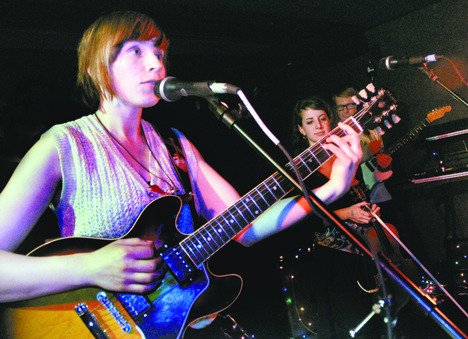 Once garage rock’s answer to Broken Social Scene, Montreal’s Red Mass has slimmed down to a cool six members. Dialing back their oddball psychedelic tendencies, the band instead offered a surprisingly straightforward dose of dirty rock and roll at the Silver Dollar.

Songs like Saturn and Weird Mess hit with a punk rock punch often lost in the band’s spacey kitchen-sink arrangements. If this diminished their chaotic energy, it also put more focus on lead singer Choyce’s charismatic frontman/cult leader persona, a role that fits him like a blood-red pentacle necklace. Using the extra stage space to his advantage, he writhed, raved and soloed like a madman.

Local indie label Out of This Spark had a lot to celebrate at their third anniversary. Not only have they put out some great records this year, but they’ve also enjoyed a significant profile boost thanks to the success of Timber Timbre, who helped snag them international distribution through Arts & Crafts. No wonder the gig was sold out well in advance.

And it looks like 2010 is already shaping up nicely. Their first release of the year, Evening Hymns’ Spirit Guides, has garnered rave reviews all around. The band’s moody, intricately arranged tunes translated amazingly well onstage, and were easily the highlight of the night.

Not that the other acts were letdowns. Jenny Omnichord’s quirky one-woman band (featuring inventive use of her namesake instrument) was indisputably charming, and the D’Urbervilles put in an energetic, crowd-pleasing performance. Indie folk band Forest City Lovers sounded a lot less twee at high volume, and the rock power suits them better than you might expect.

At night’s end, remaining audience members were treated to a few songs by an Out of This Spark supergroup made up of members of each band (which makes sense, given how many OOTS bands share members) – a great example of the musical community developing around this label.

In-demand British producer/DJ Switch has a somewhat spotty attendance record when it comes to fulfilling his Toronto bookings over the last few years, so it was a little shocking to see him take the stage near 3 am at Sound Academy’s LOVEmusic party.

Ironically, Switch probably could’ve skipped this jam, since his cordoned-off section of the multi-purpose complex wasn’t competing too well with the big-room house area just a few strides away.

The M.I.A. collaborator – and Diplo cohort in Major Lazer – DJed his set of twitchy electro with workmanlike efficiency to a crowd just slightly larger than the one New York underground disco purveyors LCD Soundsystem’s Pat Mahoney and Hercules and Love Affair’s Andy Butler pulled earlier from the same vantage point.

Meanwhile, in the nearby main house room, a massive throng of up-all-nighters were getting down with Miss Honey Dijon, who spun a classic deep house sound filtered through her years growing up in Chicago.

Dijon had been fortunate to receive the baton from young Bronx boys the Martinez Brothers, who’d revved the party with a soulful house set. It’s a bit of a head-scratcher how these two bucks learned to rock clubs so well, considering that one of them isn’t even old enough to be in Sound Academy legally.