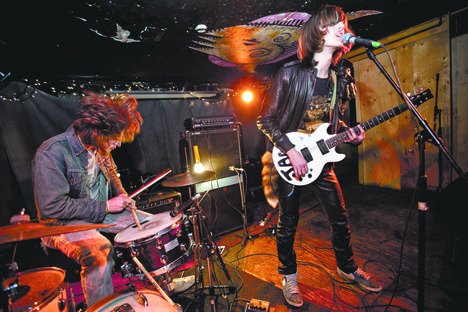 Oh, Axl. That was a long wait. Two hours after their scheduled set time, an eight-piece Slashless, Duffless, Izzyless version of Guns N’ Roses launched into the underwhelming title track from Chinese Democracy. All was forgiven when he and his incredibly tight band followed it up with three slices of Appetite awesomeness: Welcome To The Jungle, It’s So Easy and Mr. Brownstone.

Rose, finally rid of those godawful cornrows and with his bandana back intact, looked widened and wealthy as he ran around the massive stage, squawking lyrics, changing shirts and joking about his tardiness (apparently there’d been a big party the night before). Despite all the pyro, the newer tunes didn’t ignite like the classics, though his virtuoso guitarists made the solemn ballad This I Love memorable by hanging D-cup tossed-onstage bras from their headstocks.

Earlier, my teenage obsession, Sebastian Bach, proved time hasn’t diminished his feistiness or Halfordesque wailing abilities, as he and his ragtag band stomped through vintage Skid Row tunes and songs from 2007’s Angel Down. The Peterborough native gave plenty of Toronto shout-outs in between whipping his microphone above his head in a rock-star frenzy. Be still my beating heart.

With just three guitar strings, a drum set and a handful of effects pedals, Nashville’s Jeff the Brotherhood hit the sweet spot between punk, psychedelia and heavy-riffing stoner rock, all the while heating up Sneaky Dee’s on a cold winter’s night.

Formerly Be Your Own Pet’s rhythm section, Jake and Jamin Orrall buried their melodies under layers of 70s hard-rock fuzz, but couldn’t hide their polished rock-star qualities behind denim, leather and fog machines. It’s hard to believe this band isn’t huge.

An all-local support card got the blood pumping early. Mutters and City Sweethearts looked like they’d spent more time coiffing their hair than practising, but Modern Superstitions showed signs that their stage presence is catching up to their hook-heavy take on garage rock and Stax soul. Give the kids another year or two and they could be local heavyweights.

KINGDOM at the Drake Rating: NNN

Hopefully, Brooklyn DJ/producer Kingdom wasn’t too discouraged by the half-empty Drake dance floor. If he returns in a few months, after his debut single for A-Trak’s Fool’s Gold label has had time to build steam and the winter weather is over, he’s sure to get a more enthusiastic response.

Key tastemakers in underground dance music are betting on him to break out this year, and for good reason. He spins and produces bass-heavy club music that straddles all the currently hot sub-genres – kuduro, juke, UK funky – yet still maintains a consistent vibe. There’s a heavy R&B influence throughout, but it’s twisted and jacked up into something new while remaining familiar-sounding and accessible. And unlike many DJs exploring the meeting point between urban and dance, he doesn’t just stick to bangin’ anthems all night.

Those who made it out had a good time, but we’re sure he’ll do even better when playing for a packed house.

DINOSAUR BONES and HOLLERADO at the Academy of Sciences Rating: NNNN

What’s cooler than throwing a 7-inch release party at a cool live club? How about doing a semi-secret BYOB warehouse party at your buddies’ spacious rehearsal space, as local indie rockers Dinosaur Bones did Saturday night. Something between a gloriously out-of-control house party and a rave for rock bands, it was about 10 times more exciting than the usual record-release event.

It helped that Dinosaur Bones put on a great live show with plenty of stage presence, and that they’re adept at slipping genuine pop hooks under their dirty guitars and youthful energy. They’ve still got some room to grow, but they’re getting there at an admirable pace. We also can’t help but note Hollerado’s strong opening set. They’re maybe a little too enamoured of classic rock for a band their age, but they do it so well that we’re willing to forgive their nostalgia.