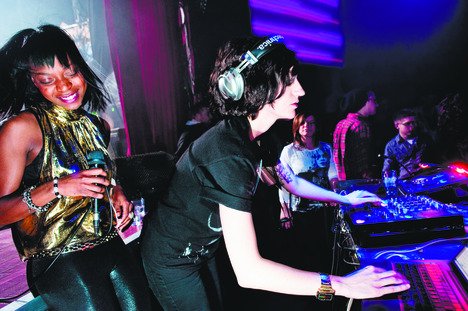 It was a night of new beginnings for two Toronto dance music talents at Mod Club. Violca Yryku is best known as half of Mansion, but since splitting ways with collaborator Barletta, she’s rebranded herself as Riviera. Judging from her Arcade Fridays DJ set, she’s still enamoured of the big-room stadium-house sound for which Mansion were known. It’s effective on the dance floor, but not groundbreaking or challenging.

Also on the bill was Isis, better known as half of booty bass duo Thunderheist, who are on hiatus while she records her solo album. For that, she’s wholeheartedly embracing her Grace Jones-influenced disco diva side, and what we’ve heard is very exciting. Too bad she didn’t play any of those tracks, instead performing only a recent collaboration with Riviera. It was a solid enough track, but considering she was co-headlining the party, we expected more.

After spending the better part of a year supporting 2009’s Lost Channels, Great Lake Swimmers seemed happy to be home. In a perfect confluence of setting and occasion, the Toronto outfit instilled its sober strum-rock with an extra dose of gravitas at the majestic ecclesiastical locale.

The band was clearly treating the hometown crowd to an extra-special set list when they dusted off their rarely performed children’s song See You On The Moon!, while Concrete Heart, their ode to mid-century Toronto architecture, took on a whole new life inside the heritage building.

Constant touring has left the six-piece tight, and their sophisticated arrangements were always subdued enough to let Tony Dekker’s velvet vocals stand front and centre. For the encore’s final song, Dekker unplugged his guitar and played solo, using only the church’s stellar acoustics as amplification.

JUSTIN CHEE, PRINCESS CENTURY and HALF BAKED at the Garrison Rating: NNN

Justin Chee’s solo lo-fi act was surprisingly gripping. Armed with a guitar, some preprogrammed drum loops and a soothing voice, Chee meshed his music with the dreamy visuals supplied by the Wavelength staff, and the free album giveaway locked in the crowd’s appreciation.

Princess Century sang sweetly over an ambient, creeping synthesized backdrop and incorporated interesting live elements along the way, including a vocal pitch shifter, percussion and, unpredictably, a short ventriloquist act. Add in absurd, unsettling video and her set verged on performance art.

Montreal indie/rap/glitch outfit Half Baked was similarly out-there and right at home at the weird-friendly party. Their jerky rhythms nicely matched the night’s avant-garde tone and gave the latecomers a chance to get energetic on the dance floor.

This WinterCity matinee at Bread & Circus didn’t begin smoothly but recovered beautifully. Chhandam Dance Company kicked things off with a classical Indian dance in the small front bar, which was so crowded that only a fraction of the audience could see anything.

Then when it came time to move into the rear performance space, the staff announced they’d mistakenly charged too little and needed to collect another $10 dollars from everyone. Normally this would be a disaster, but most of the crowd happily went along with it, a testament to the loyal following the co-headliners enjoy.

For the next two hours, the Toronto Tabla Ensemble and LAL treated us to mesmerizing updates on South Asian musical traditions. But the real treat came when the two joined forces. The combination breathed a ton of energy into LAL’s minimalist electronic soul, while simultaneously focusing the TTE’s sprawling instrumental compositions into something even stronger than the sum of the group’s already considerable parts.