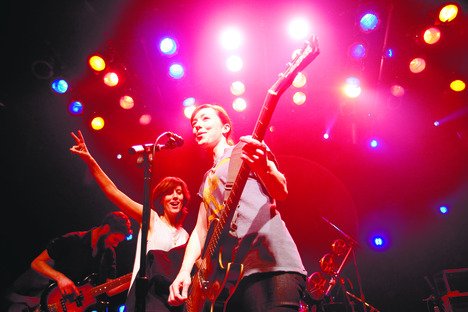 Attending a Magnetic Fields show is like sitting around a living room with a few close friends, sharing stories and having a laugh. But the stories are set to song and the laughs come by way of Stephin Merritt’s droll, unlucky-in-love lyrics and the easy, teasing banter he sets up with Pianetist/vocalist/long-time manager Claudia Gonson.

Arranged in a semi-circle with (mostly) acoustic instruments, the New York indie pop band played tunes from as far back as 1991’s Distant Plastic Trees (Falling In Love With The Wolfboy, 100,000 Fireflies) but drew mostly from Realism, their elegant but relatively unamusing new orch-folk album. Sam Davol’s cello work was dynamite, Shirley Simms was on hand to croon classics, and, despite Merritt and Gonson having colds, they pulled off a rousing rendition of Wi’ Nae Wee Bairn Ye’ll Me Beget.

But while the decision to divide their vast discography over two sets was a smart one, the second set was decidedly less inspired, with perpetually disgruntled Merritt seeming bored and distracted. Blame the sniffles?

Mariah Carey’s cold was a running theme at her Air Canada Centre show. “If you don’t mind, just have a little mercy. I mean, it’s not like you can just take a Theraflu while you’re onstage,” she languidly told the crowd, mimicking herself dozing off mid-concert.

It’s a testament to her vocal talent, then, that she managed to flex her legendary five-octave range throughout the night. Looking like a high-end cupcake in a frilly caramel-coloured dress, Carey broke out recent hits Shake It Off and Touch My Body before retreating backstage for one of four costume changes.

Based on reaction, the crowd was there for the 90s classics, bugging out for Always Be My Baby, Honey and closer Hero. Fantasy wasn’t on the set list for some reason, and few seemed interested in her discofied Diana Ross mashup of Heartbreaker. But she turned out a commanding performance of last year’s anthemic single Obsessed.

The first thing you noticed walking up the stairs to the Courthouse was the sound pressure of the bass increasing with each step. The promoters (Boogie Inc.) decided to bring in a massive sound system for veteran New Jersey deep house heavyweight Kerri Chandler, and they definitely went all out.

It was almost too much: the volume of the Sno-Men’s opening DJ set approached the pain threshold more than a few times. Luckily, Chandler quickly brought things down to a more controlled level, using the extra power for clarity and dynamics rather than bludgeoning.

Chandler’s performances have evolved over the years to become something in between a traditional DJ set and a live show. Mixing records, live keys, samples and a cappella tracks, he’s come up with a novel way of reinterpreting classic anthems on the fly. While it might sound a bit complicated on paper, he pulls it off so seamlessly that if you aren’t watching closely, you’ll think he’s just playing amazing custom remixes.

Dear Toronto indie rockers, Happy Valentine’s Day, I love you forever, signed, Bruce McDonald. This was the sentiment the acclaimed Canadian director of Hard Core Logo, The Tracey Fragments and Pontypool imparted to the crowd at the Mod Club, who would also be serving as extras in his new film, Trigger.

While the night was ostensibly a musical buffet featuring short sets by 10-plus female-fronted Toronto indie bands, for McDonald it doubled as an opportunity to shoot a climactic club scene that required members of the film’s fictive band, Trigger, to join disco rockers Foxfire onstage and jam out three takes for the cameras.

However, before the filming, the crowd was treated to Carmen Elle’s inspired lyrics and distorted guitar hooks, a haunting acoustic duet courtesy of Ian Russell and Simone Schmidt from One Hundred Dollars and a bubbly, poptastic blast from Hooded Fang.

Then Foxfire delivered a one-song sample of what their new record will sound like (danceable, catchy, epic), before McDonald stepped in to prep his big scene.