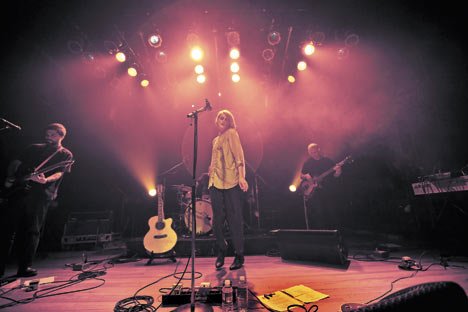 Nosaj Thing’s style of glitchy, bass-heavy instrumentalism was a great warm-up for fellow Los Angeleno Daedelus. The young producer’s live set drew mostly from his recorded catalogue, and his ability to make the room claustrophobic and frenzied with a flick of his wrist was impressive. But the crowd responded best to his Drake and Flying Lotus remixes, proving that a bit of familiarity can really pull a set together.

Though Daedelus has a series of downtempo tracks posted on his MySpace page, his performance was nothing short of raucous. He bashed away on a custom 256-button MIDI controller, weaving together UK garage licks, Soulja Boy samples, buzz saw dubstep and cuts from fellow undefinable act Zomby. The result: an extremely dance-oriented set that retained his trademark dissonance.

When you’re going to see a legend like Frankie Knuckles, it’s easy to get your hopes up too high. House music was named after his late-70s/early-80s residency at Chicago underground club the Warehouse, and since then he’s remained remarkably consistent and true to his roots. But that means he has to live up to his own track record, and he’s set the bar pretty high over the last three decades.

If we’d never heard him DJ before, we probably would’ve been more impressed he’s still miles ahead of the young guns nipping at his heels. Unfortunately, this Cobra Lounge gig lacked connection between the DJ and dance floor. This could’ve been partly due to the entertainment district venue, since the area tends to attract randoms and repel his traditional fan base, which greatly changes an event’s dynamics.

Sunday night isn’t the best time for a high-energy live show, but it was probably an ideal time slot, given their sleepy-time vibes, for Sarah Assbring’s El Perro del Mar and Victoria Bergsman’s Taken by Trees. While the two Swedish singers don’t sound similar on record, this double bill was an exercise in common ground rather than contrasts, thanks in part to their shared backing band.

The highly skilled hired guns took very different approaches to backing up the two acts (acoustic world-beat flavours for TBT, electric 80s pop vibes for EPDM), which was a nice differentiator since both singers favour simple chord progressions, mellow grooves and soft, understated vocals. Musically, Taken by Trees sounded closer to her recordings, while Assbring had more stage presence than Bergsman, who mostly stared into space.

While the show was pleasant and enjoyable, we couldn’t shake the feeling that both acts are better suited to headphone listening in a dark bedroom.