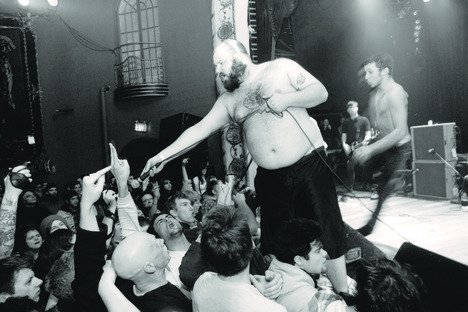 When a masked rapper with a slim build hopped onstage with a microphone, clearly not using it, I feared for his safety. This was not DOOM, the night’s headlining act, but an unbelievably bad look-alike. It seemed that neither of the two rappers the audience paid $40-something to see would show up.

First, the show was postponed a month ago. Then the main draw, Mos Def, pulled out at the last minute, and now the rumour that DOOM would send an imposter in his place seemed to be coming true. Thankfully the real DOOM, who owns a slight paunch, swaggered out from behind his ringer after the boos began.

Minus the circus surrounding the show, his set was amazing. He’s like a rhyme-spitting machine or a little kid who never stops talking. His marble-mouthed run-on sentences never slowed during the entire 45-minute set. (Well, except for when the sound system conked out for 10 minutes.)

But even if the metal-faced act had been flawless, it still underwhelmed when you imagined what was originally supposed to go down.

FUCKED UP with KURT VILE and the D’URBERVILLES at the Opera House Rating: NNN

Fucked Up like to keep their fans on their toes. Contrary to a press release sent out prior to this well-attended Opera House gig, the hometown hardcore group did not recreate their Polaris-winning opus, The Chemistry Of Common Life, and unless you count Jonah Falco’s mother on flute, neither did they bring a throng of “very special guests” to help them do so.

It’s fitting, in a way. The only predictable thing about a Fucked Up show is its unpredictability, and this one had a little bit of everything: sonically diverse openers (the D’Urbervilles and Kurt Vile), audience participation, a momentary bout of onstage violence, tinnitus-inducing volume, a Sex Pistols cover and a band-sanctioned after-party at a nearby dive bar. Even while breaking promises, Fucked Up find new ways to keep us interested.

Berlin’s Pole (aka Stefan Betke) is a bit of a legend in the world of minimal techno, known for bringing a seriously experimental attitude to the dance floor. He plays live infrequently these days, so anticipation was high for this rare Toronto gig. There were also fears that his stripped-down, dubbed-out soundscapes might not appeal to the Drake’s usual weekend party crowd, which might not share his fan base’s appreciation for filtered clicks and crackles.

But Betke was in a party mood, focusing more on his dance floor tendencies than austere experimentation. Sure, some of the fanboys standing up front with their arms crossed might have thought he lacked seriousness or sounded too much like house music, but they never dance, so why cater to them? If Betke’s moving in this direction, we can’t wait to hear his next record.

It’s best not to get your hopes up for punk rock reunion shows. Some songs are simply best sung by teenagers, and watching middle-aged men try to recapture the glory of their youth can be cringe-inducing. So it was with trepidation that we made our way to Mitzi’s Sister to check out Ottawa punk pioneers the Action, who recently reunited after a three-decade absence.

They’ve been described as Canada’s first punk band, a claim we’re not quite ready to agree with. (Surely, Teenage Head are also contenders for that title.) But they were certainly one of the first, and this reunited version stays true to their roots. Think New York Dolls mixed with early UK punk and a dollop of Exile-era Rolling Stones. Frontman Ted Axe is still confrontational and glammed up, although the mild-mannered Toronto crowd kept its distance when he got in people’s faces.