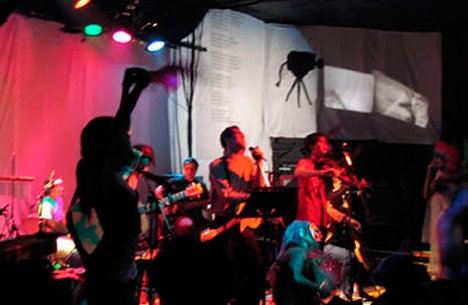 THE HIDDEN CAMERAS at the Opera House on Sat, Dec 5. Rating: NNNN

It was the final night of the Hidden Cameras’ 32-city North American tour, but the gigantic band seemed neither fatigued nor unenthusiastic.

Instead, while frontman Joel Gibb delivered tunes from their new Origin:Orphan album in his rich baritone, the other members hopped and sang around him, with glock player/keyboardist Maggie MacDonald leading the packed Opera House in choreographed dance moves. A twelve-person choir dressed in ghost sheets with the eyes cut out hovered comically on rafters.

Spectacle is what we’ve come to expect from Toronto’s gay church folk band, yet the costumes, dance moves, white-wigged girls waving white flags and guest vocals by opener Gentleman Reg never overshadowed the impeccably executed and orchestrated music, which was joyous and driving but took a quieter, sombre turn midway through the set.

Things picked up again near the end, with uplifting versions of AWOO and In The NA.

A cover of Rihanna’s Umbrella during the encore got everybody crazy. [rssbreak]