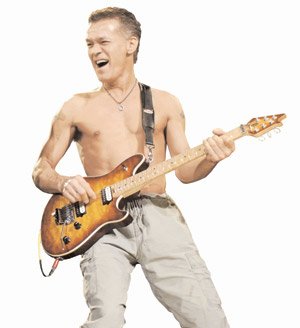 Photo By Paul Till

WYRD VISIONS with LAURA BARRETT at the Music Gallery

Why isn’t Laura Barrett famous already? Every time we see the Toronto kalimba player her talent has grown immensely. And it’s not just her fast fingers that turn us on her songs are as strong as those of any gal with a guitar. Her Music Gallery turn was thrilling as always, and we think it’s only a matter of time until Barrett breaks big.

Wyrd Visions , however, will never enjoy playing to a large audience. That doesn’t mean Colin Bergh isn’t as interesting as Barrett. He’s just a lot less accessible. The guitarist’s drony, repetitive song structures should have put us to sleep, but there’s something mesmerizing about him.

Maybe it’s the chanting, the awkwardly oversized sweatshirt or the ridiculously minimal nature of the whole thing, but whatever it is, Wyrd Visions is easily one of Toronto’s most interesting and curious performers.

Every hard-drinking city needs a gang-vocal, straight-on punk band representing the boozy voice of the disenfranchised masses. What the Bouncing Souls are to Jersey, the Dropkick Murphys to Boston, Hostage Life could be to T.O.

Maybe that’s why singer Colin Lichti looked as though playing a 9 pm all-ages set Friday was as foreign to him as playing at 9 am on a Monday. In between slugs of Red Bull and beer, Lichti and crew soldiered on with pissed-off punk anthems, inciting a small herd of bucks to lock horns at stage front.

Still, you could tell the conditions were adverse and that the Life would probably rather be rocking AA crowds in suburban halls, where at least the teens can slam a few in the parking lot and the show doesn’t need to end early so the venue can reap its weekend nightclub revenue.

Not helping the situation was a noticeably thinner crowd after openers Attack in Black . The Welland, Ontario, combo held the young set enraptured with their sensitive guitar rock, exploding with emotionally wrought choruses, then retreating back into moody and affected verses.

Among the swaying and swooning were major AIB fans (and Dine Alone labelmates) Dallas Green and George Pettit of Alexisonfire. The screamo all-stars, who can’t be accused of losing touch with Toronto’s punk scene, were later spotted at Fucked Up ‘s painfully loud closer set at the Horseshoe , where Pettit jumped onstage, grabbed the mic and furthered the attack on present eardrums.

ROY HARGROVE QUINTET with the BAD PLUS at Massey Hall

Precision pianist Gerald Clayton , stolid bassist Joe Sanders and loose-limbed drummer Montez Coleman provided supremely tasteful accompaniment for both Hargrove and tenor saxophonist Montell Jordan , but they didn’t catch fire for a good 40 minutes. It was only when Coleman lurched into the Latin-tinged rhythm of Nothing Serious, the title track of Hargrove’s latest disc, that they finally began to cook. Alas, it was also the closer.

THINK ABOUT LIFE, THE GUEST BEDROOM, ANIMAL MONSTER, THE WINKS and DRUMHELLER at Salem’s Loft

Official loft parties happen so infrequently in the local indie rock scene that it’s easy to forget about the annoying bureaucratic details that come with throwing legal renegade events.

Accustomed to the laissez-faire vibe of similar shows in Montreal, we were a bit weirded out by the stringent security at Saturday’s Wavelength throwdown at Salem’s Loft . Between the frisking, intense ID checks and adherence to capacity restrictions, it was a total flashback to mid-90s raves. Happily, we got there early enough to make it inside (rumour had it folks were turned away as early as 10:30 pm) for the entire random lineup.

While the wheeze and skronk of Drumheller ‘s sax-heavy deconstructed jazz was odd in a rock-centric context, there was something about the informal environment that made you feel like you were hanging out at a Beat-era NYC jam session – especially hearing them side-by-side with the Winks ‘ rickety cello-bolstered indie pop.

MORE OR LES at Sneaky Dee’s

Fuck the Police and the 49th Grammy Awards. Sunday night was all about Wavelength , which took the four-night seventh anniversary party back on home to Sneaky Dee’s .

The big question was, how would the rarely hiphop-friendly WL crowd take to genial MC More or Les , sandwiched between improvised jazz-electronica-noise blurters I Have Eaten the City and “bad band” revolutionaries Garbage! Violence! Enthusiasm! ?

Surprisingly well, actually. People pressed tightly against the stage threw their hands in the ay-yurr either to show love for the sweaty (forgot his towel, Les confessed) rhymer or to hold up objects that he freestyled about with dexterity.

We even made it into his off-the-dome flows with a rhyme about how he’d read “NOW later because he’s rhyming right NOW.” Touché.

We know it’s hard to look at the great ol’ state of Texas objectively these days, but after Midlake’s Lee’s Palace performance you might want to consider hopping on the next plane south. Armed with a bevy of keyboards and guitars, the band’s Coldplay-meets-Iron & Wine sound mesmerized the packed house and even prompted one person to apologize for Toronto’s sub-zero temperatures.

But Midlake kept everyone warm and fuzzy with songs off their latest record, The Trials Of Van Occupanther. Tim Smith’s soothing coos and Paul Alexander’s spot-on harmonies were the highlights, but their complicated arrangements, replicated to perfection, weren’t too shabby either. If only we could vote Midlake for president