NOW MagazineMusicConcert reviewsTyler, The Creator has softened, and Toronto is here for it

Tyler, The Creator has softened, and Toronto is here for it

The hip-hop auteur connected with both heartfelt and aggressive flows in his psychedelic Ricoh Coliseum set. Vince Staples had a harder time igniting the crowd 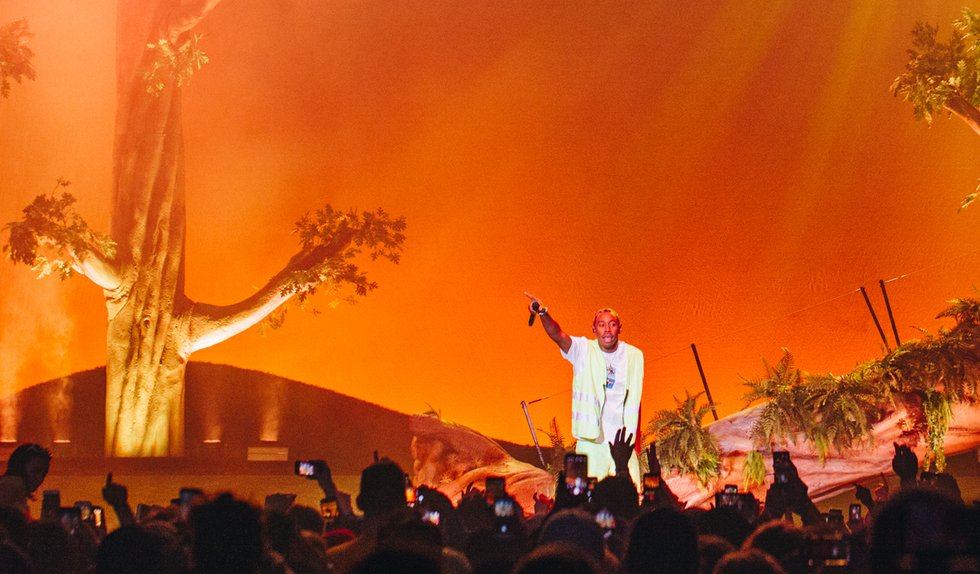 Plaintive emotion has traditionally lost out to mocking exaggeration at Tyler, The Creator’s concerts. But if the capacity crowd of thousands at Ricoh Coliseum was an indication, the former Odd Future main man is finding his greatest success by being heartfelt.

When he first broke out around 2010, Tyler was a hip-hop auteur-meets-Jackass provocateur. His wild image and playful fashion sense starkly contrasted his rage-y mosh-pit music and nihilistic lyrics, usually delivered in growling and guttural flows. Some of his songs were deemed so misogynistic and homophobic that he was branded a threat to the public good and banned from entering Australia, New Zealand and the UK in 2015.

His softening had already begun when he opened for A$AP Rocky at Echo Beach that same year. A disgusting lyric about raping a pregnant woman was tweaked, but he undermined any potential earnestness by acting obnoxiously hammy.

Since then, things have changed dramatically. For this first local show in two-and-a-half years, Tyler is riding high on the best reviews of his career for last year’s Flower Boy, a daydreamy album full of sweetness and light. The juvenile impulses remain, but are put into context in highly personal songs. It’s practically his New Amerykah Part Two: Return Of The Ankh and Toronto is here for it. 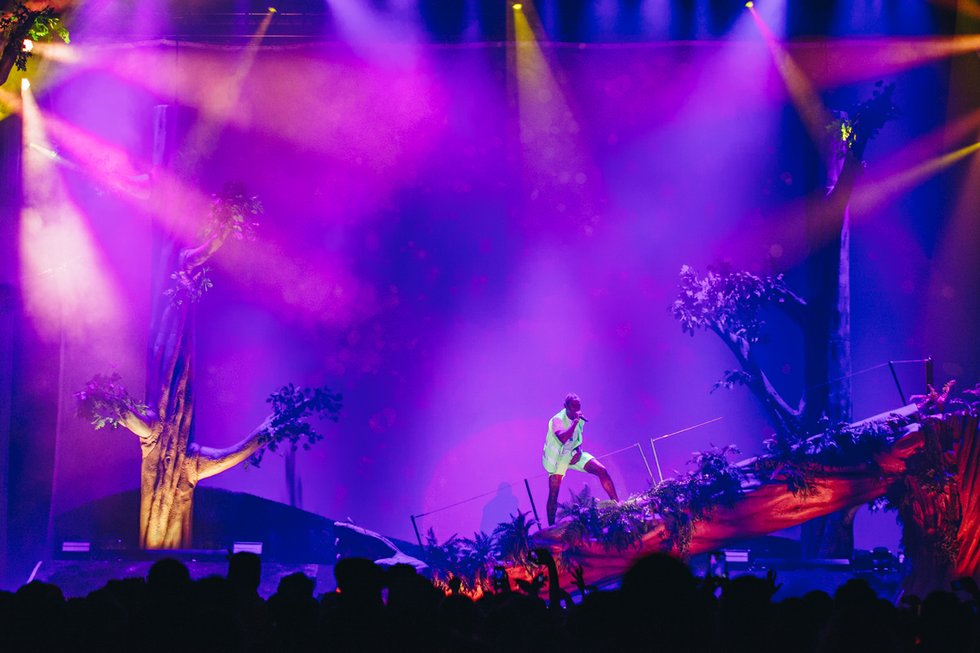 Sporting a neon yellow vest and shorts combo and leopard print hair, he opened the show atop a large tree stump amid an enchanted forest set with a twinkling starry sky backdrop. The audience roared to life as the melancholy strings from Flower Boy track Where This Flower Blooms played and they loudly sang the chorus. The room exploded when the beat dropped and the subtly psychedelic lighting design shifted from purples and blues to pinks and oranges.

Flower Boy vacillates between gentle moments and bursts of aggressive flows in a loud-quiet dynamic that Tyler played up perfectly throughout the show. He’d hang back and let the energy swell and then spit his verses precisely and animatedly, moving his free for emphasis. He descended his wooded staircase doing a quickie freestyle to Jay-Z’s 4:44 that kept the room cranked to eleven before the bpm settled into a mid-tempo lilt for 911.

So many acts lean heavily on big, clubby beats to carry the energy in concert, but this audience didn’t change gears when the music mellowed – and neither did Tyler. The Flower Boy ballads were all greeted as anthemic singalongs, with the crowd handily filling in parts originally sung by Frank Ocean, Kali Uchis and Steve Lacy.

Between songs he marvelled at the size of the room, thanking the crowd and then roasting them. “Y’all got the ugliest taxis I’ve ever seen in my goddamn life,” he said before going on an extended rant about the cold February weather. “I saw a nigga outside in some fucking sandals and I wanted to slap the fuck out of him.”

Flower Boy has a few straight-up bangers – namely Who Dat Boy and Ain’t Got Time! – but whereas past Tyler shows have inspired chaotic moshing, these explosive songs felt unifying in a different way. When introducing Tamale, he explained he wanted to write a dancey song after he noticed how the sludgy and edgy songs off his debut Goblin failed to move people while on tour in 2012. And after years of aggro dudes rapping along to eyeroll-worthy material, there was something satisfying in hearing the young, diverse and all-ages crowd nail the line “I’ve been kissing white boys since 2004.”

The back catalogue material he chose – She, IFHY, 48 – meshed well with the soulful, lovelorn angst of the new material, highlighting that the seeds of Flower Boy have been there all along. 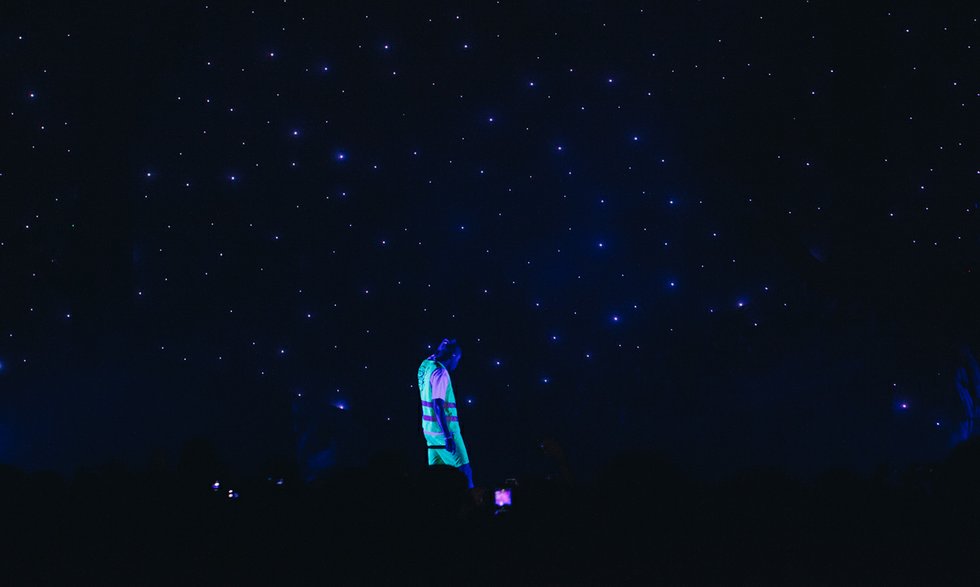 Tyler’s playfulness was contrasted by opener Vince Staples’s intense and claustrophobic club music. The Long Beach MC’s Big Fish Theory was also one of last year’s best albums, thanks largely to its forward-thinking beats and archly witty lyrics. Like his music, Staples’s visual show relied on political and social engagement. Clips of news broadcasts displayed on a wall of fragmented square LED screens that initially resembled old TV walls from the 90s, but twisted and shifted throughout his 45-minute set.

Staples was backlit by bright white light, shrouded in smoke and wearing a grey bulletproof vest over his all-black outfit. His rapping was on point, but the stream of no-nonsense bangers that began with BagBak only fitfully ignited the crowd and his own energy level grew increasingly spotty as well.

“Will everybody go crazy or will this be dry?” he wondered aloud as the high-pitched squealing intro to Blue Suede rang out.

Staples’s onstage delivery is as furious as he sounds on his records. As he rapped, he circled the stage, eyeing the crowd like a boxer sizing up an opponent. For more introspective numbers like Love Can Be…, he stood stationary behind a mic stand, but any personal sentiment he intended to draw attention to was swallowed by the song’s loud, frenetic beats. Only a concentrated group of people in the pit helped Party People live up to its name, but a final run of hits – Big Fish Theory, Norf Norf and Yeah Right – ended the set on a high note.