5 moments that united the crowd at Veld festival

The EDM and rap festival has become a massive event. From A$AP Ferg's Toronto love to a touching Avicii tribute, here's what showed its communal spirit 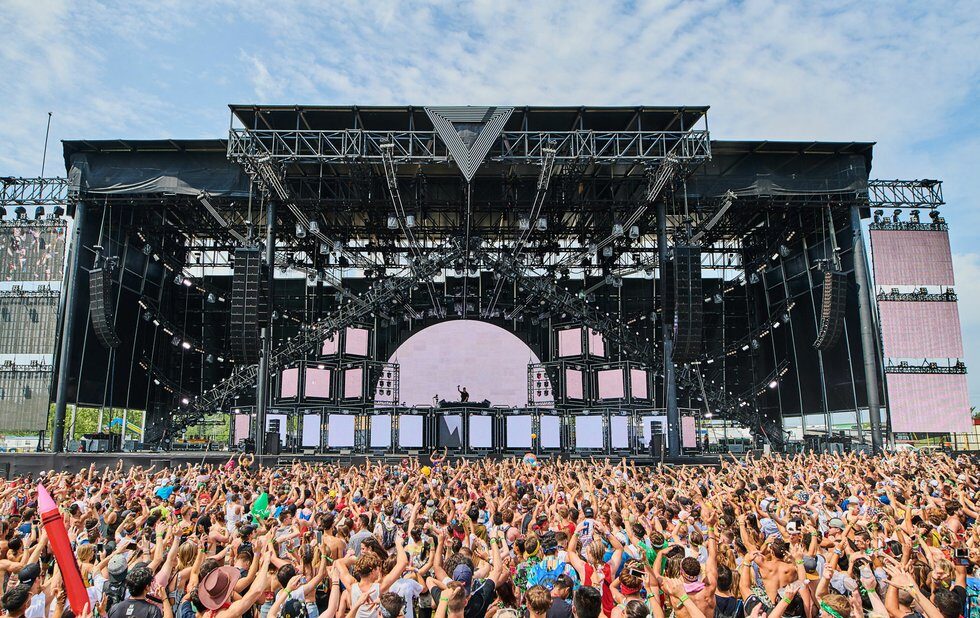 Veld is one of Toronto’s biggest festivals. Now in its sixth year, the electronic and rap event draws upwards of 30,000 attendees over two days. Whatever you think of it, Veld plays an important role in community building. Whether a music fan’s sole festival experience of the year or just one of many on the calendar, it unites attendees decked out in costumes, fishnets and flower crowns in ways that resonate well beyond Downsview Park.

The Dutch DJ and Veld’s top headliner closed out the festival with what felt like a strong, clear reiteration of the themes of positivity and inclusivity that echoed throughout the two days of performances. Songs like Together set the PLUR (Peace, Love, Unity, Respect) ethos to polished, large-scale, major-chord EDM, with its repeated refrain of “We don’t need much as long as we’re together.” It’s a cheesy sentiment, but one that was hard to deny amidst a crowd of thousands congregated in front of a mainstage lit up by high-production visuals and glow sticks.

The energy from that hopeful performance carried over after Garrix’s set, spilling into the subway cars leaving Downsview station, where I witnessed a brilliant impromptu after-party where people sang and danced to Bodak Yellow and God’s Plan and invited strangers station after station to join in.

When Rezz slowed things down

Veld performers emphasized maximalism, as evidenced by Garrix’s logo: a plus sign and a multiplication sign. It’s as if the shared dogma was “positivity equals MORE.” The only artist who really deviated from this with their own substantive subtracting was Niagara’s own Rezz, whose set resonated with those who couldn’t relate to the non-stop feel-good music.

While EDM sometimes feels like a race for more, more, more, Rezz’s songs are half the speed of her peers’, around the 80-100 BPM mark, making her creepy mainstage performance feel like the most subversive set of the weekend and demonstrating that the EDM community can encompass a plurality of people, ideas and sounds.

Most performers kept their banter to a minimum, save for crowd direction or the usual “What’s up, Toronto?!” That wasn’t the case for A$AP Ferg, who was all charm while closing out the Hennessy Stage Sunday night. As dust from the open field rose up from all of the moshing and dancing to meet the clouds of cigarette, weed and vape smoke, Ferg made the effort to connect with his audience through anecdotes that extended beyond the usual pleasantries. He recounted watching Toronto’s rise to become the hip-hop city it is today, and said that he liked it here so much he’s thinking about getting a home here (a lot of people say this, but he was just here back in May) before launching into Nasty.

He took a moment of silence for his friend and collaborator A$AP Yams, who passed away in 2015 and without whom “there’d be no A$AP Ferg” before performing Yamborghini High. And he dedicated early hit Shabba to the Toronto West Indian community. The way he constantly tried to connect with his audience was endearing.

A touching tribute to Avicii

While not a “set” in the proper sense, the visual tribute to massively popular Swedish DJ and Veld alumni Avicii, aka Tim Bergling, who died by suicide earlier this year, was an important moment in the festival. Set to the late artist’s Fade Into Darkness, the tribute put a hold on the good feelings to make time and space to collectively grieve.

Their inclusion in this list might rub people the wrong way, since Migos almost missed Veld entirely and upset a lot of concertgoers in the process. That was in addition to first-day grievances like water shortages, artist cancellations and set times running long. (Day two ran more seamlessly and safely in comparison.) Migos member Offset was arrested on gun charges in late July, so people were right to question whether they’d appear or not.

But if you stuck it out that first night to see Migos finally start at 10:30, well after their 8:25 and then rescheduled 9:50 performance, it felt something like a victory. Nothing brings people together like running full tilt across a field at the sound of DJ Durel warming up before Migos finally took the stage with Deadz. The circumstances weren’t ideal but those who stayed were glad they did.

The Atlanta trio spent the next thirty minutes giving the elated crowd their best, with a comprehensive setlist and energetic performance that would serve as a solid case for delayed gratification.

Migos returns to Toronto with Drake at Scotiabank Arena from August 20-22.