Wilco was a perfect storm of a band at Massey Hall

At the first of two Toronto shows, the Chicago sextet made it all right to celebrate something made in America for a few hours 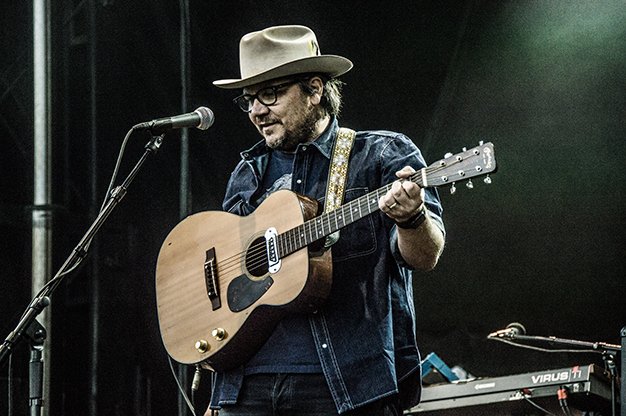 “How are you enjoying your relatively sane country?” Jeff Tweedy asked, several songs into a glorious set by his band Wilco.

The Chicago sextet played for about 30 minutes at this Massey Hall show (night one of two) before Tweedy chose to address the room, and he seized the moment to make a subtextual Trudeau vs. Trump joke.

It didn’t feel coincidental when the next song, Misunderstood, which usually climaxes with bombs-bursting-in-air clatter, was given a tender, poignant, acoustic treatment.

“I want to thank you all for nothing at all,” Tweedy sang, forlornly, and with traces of confusion instead of the line’s customary defiance. Behind him and the band, a gorgeous forest backdrop shimmered warmly or, if the mood of a song called for it, suddenly turned menacingly dark.

It was an emotional, reflective, funny and memorable night.

Louisville’s Joan Shelley worked with Tweedy on her new record at Wilco’s loft studio in Chicago. Opening the show and accompanied by guitarist Nathan Salsburg, she showed off a few of these well-structured, airy folk songs and thanked us for the Canadian respite from the military madness in her own country. Tall and still, she sang with a full voice, and her deceptively intricate guitar interplay with Salsburg sent her songs floating slowly to the roof.

To perhaps complement the experience, the Wilco show began with just Tweedy and rock’s most fascinating guitarist, Nels Cline, in a duo configuration as well, playing Normal American Kids off 2016’s Schmilco album.

It seems to recount growing up in the United States in the 1970s. But the words “normal” and “American” sound so powerfully weird together right now. “Always hated it,” he sang. Maybe, for Tweedy, who seems like an open-minded, melting pot kind of man, they always have.

For the better part of this century, Wilco has been a perfect storm of a band. They make their respective, familiar rock group instruments do uniquely interesting things and remain beyond compare live. They have adopted various musical  forms (underground folk, groove-based Krautrock, jazz skronk, knowingly smart indie-rock, etc.) to conjure their own vibrant, distinctive sound.

And, because their fanbase skews older, the band repeatedly inspire people at Wilco shows to get out of their seats where common sense and probably odd aches compel them to stay seated whenever possible. But sometimes a hard snare crack or outer space guitar solo or wise lyric in Art Of Almost or Impossible Germany just lifts them up. Tweedy will chide and cajole us to rise with wit and good humour.

With subtle and overt rearrangements of classic fare and a whole slew of recently released songs, Wilco made it all right to celebrate something made in America for a few hours. Though someone should tell Tweedy things have always been pretty weird up here, too, and still are.