Constantines look back on a decade of rocking out 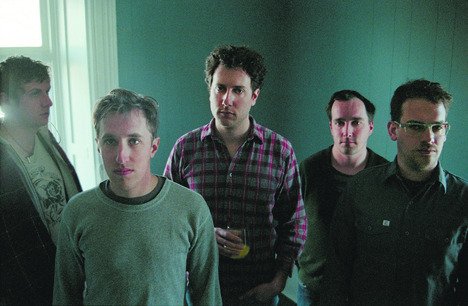 It’s September 1999, in London, Ontario. An early crowd gathers at a mid-sized venue called Call the Office to see California punk band the Muffs. Some unnamed openers take the stage. They blast through seven loud, angry rock songs. One is called National Hum.

No one in that room knew it at the time, but one of the most important Canadian bands of this past decade had just come into being. Later that year, they would name themselves the Fevers before settling on Constantines, a word randomly culled from Art Bell’s late-night paranormal radio show, Coast To Coast AM.

A decade later, the five members of Constantines are reflecting on a career that’s seen their sincere brand of blue-collar indie rock win acclaim the world over. To celebrate, they’ve planned a tour reminiscent of their early days.

“Our first shows were all around southern Ontario,” says singer Bryan Webb on the phone from Montreal. “We’re going back to all the places we started out playing, to see old friends and to say thanks.”

Besides returning to Lee’s Palace and Call the Office, the band will play Guelph, a city they’ve called home.

“Guelph was a major part of our formative years,” says Webb, recalling wild house shows and major career moments that occurred at their home on Huron Street.

“I can remember sitting there when Tyler [Clarke Burke] and Lisa [Moran] from Three Gut Records called to say they were interested in putting out our first record, and we were all just blown away.”

That self-titled album, released in 2001, garnered a Juno nomination and put the Cons squarely on the Canadian indie rock map. But a move to Toronto would expand their audience even further.

“At first I was reluctant to move, just because of the size of the city,” admits Webb, “but most of the people I was involved with creatively had already moved there.”

After settling into Kensington Market and playing one of the most memorable sets in the history of the Wavelength music series, Toronto became home.

“I really consider us a Toronto band now,” Webb says. “There’s so much of Toronto in what we do.”

The band released Shine A Light in 2003, which was picked up by indie heavyweights Sub Pop in the U.S., enabling Webb to quit his day job. On more recent records, like last year’s Kensington Heights (Arts & Crafts), he’s softened his gruff approach to songwriting.

“We still play old songs because they’re fun, but those songs came from being in punk and hardcore bands, so I’d only learned to write angry. Now I write more about people I know who are living inspiring lives or surviving in interesting ways.”

Currently, Constantines are dusting off old songs like National Hum in preparation for their retrospective tour, and looking ahead to a series of gigs at the Olympics. But foremost on Webb’s mind is saying thanks to the fans and bands who’ve contributed to their success.

“I don’t even care about sounding corny at this point: thanks, Toronto.”