NOW MagazineMusicCurl up with some new music

Curl up with some new music

If you're going to be stuck indoors,. 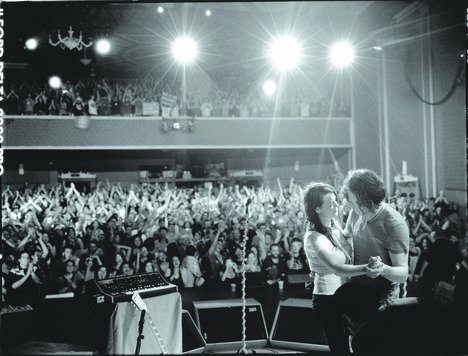 If you’re going to be stuck indoors, you might as well have a good soundtrack, and there’s plenty of new music coming out to spend quality time with by the fire.

If you’ve already heard the title track to Sade’s upcoming Soldier Of Love (Sony) album, you should be as excited as we are about her first album in 10 years, streeting February 8. Her voice sounds as soft and sultry as always, but the production hints at a new, sexy toughness.

But wait a day, because a flood of big releases hit the stores February 9. Trip-hop icons Massive Attack are back with their highly anticipated (and long delayed) Heligoland (Virgin/EMI). Early reports are promising, and there’s a strong cast of collaborators on board.

Also hitting the streets that day is Hot Chip’s fourth album, One Life Stand (EMI). Word is, they dive deeper into the soulful side of their electro-pop sound, and the leaked title track definitely has lots of dance-floor potential.

At the same time, Brooklyn weirdo rockers Yeasayer launch their second album, Odd Blood (Secretly Canadian), and it’s already being tipped as a breakthrough record. The music blogs have been foaming at the mouth since it was leaked in early December, but as the band posted to their Twitter account at the time, “Presents are always spoiled for those who open them before they are supposed to.”

Looking forward, Detroit garage rock stars the White Stripes release Under Great White Northern Lights (Warner) on March 16, a box set version of the film of the same name, which documents the band’s crazy 2007 Canadian tour. Jack White was inspired by his Nova Scotia family roots to hit every single province and territory in the country, playing everything from concert halls to public parks – even a fishing boat along the way. The luxe package contains the DVD, a second DVD of their 10th-anniversary show called the White Stripes Under Nova Scotian Lights, a live album recorded over the course of the tour on high-grade vinyl (and CD), a live 7-inch, a 208-page book and more.