Before the artists who live there are evicted at the end of the month, the band played a final secret show. That became their new live Sober Motel/Bad Biology video, premiering here. 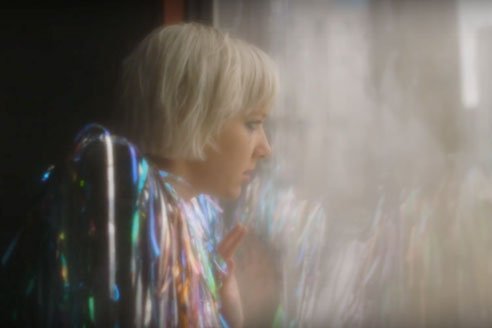 For nearly six decades, hundreds of artists have worked and lived inside the Coffin Factory at Niagara and Tecumseth. Built in the 1880s, the warehouse was originally a factory that produced pianos, doors and furniture until the early 1900s, when the National Casket Company took over. Caskets were produced in the building until 1973.

In the years since, it’s been divided into spacious live-work artist studios for musicians, fine artists, metalworkers, photographers, performers and dancers. On April 1, the last tenants of the Coffin Factory are being evicted to make way for a new condo complex. Some of these tenants have been in the building for 25 years.

Katie Monks, lead singer and guitarist for Dilly Dally, has lived in the building for the past few months. With Dilly Dally’s new live video for Sober Hotel and Bad Biology from 2018’s Heaven, which Monks directed and her roommate, artist Vanessa B. Rieger, did lighting and set design for, she says she wanted to represent the spirit of the Coffin Factory.

Wearing a sculptural cape covered in shimmering streamers, she walks through the hallways, on the roof and around the warehouse like a funeral procession. The video culminates in a sweaty and cathartic concert in Monks’s unit – a free secret show they threw and invited all the local artists in the building.

“It’s so important to cause a fuss when these places fall off,” says Monks. “The Coffin Factory is a place where artists are free to be themselves. Make noise, experiment, collaborate and live with people you may not have otherwise met. A place to worship the creative process and live out your dreams.”

Monks moved out earlier this week, with Dilly Dally heading out on their biggest North American tour yet.

“It’s important to acknowledge where we actually came from and how we got here,” says Monks. “If we had each moved to the city ten years ago without having spaces like this, the band probably wouldn’t exist today. Support from our community has been crucial.

“To me, [Coffin Factory’s closure] is a symptom of a culture that looks down at the artists themselves, despite wanting to consume what they create. That’s why it’s so important to hold its memory up so high.”

Listen to this week’s #NOWplaying playlist below and subscribe here for a new one filled with the best Toronto music of the week, updated Fridays.