A brief history of the Sam the Record Man sign

After a decade in storage, the iconic spinning records are finally lit up for public view at Yonge-Dundas Square – but the saga continues 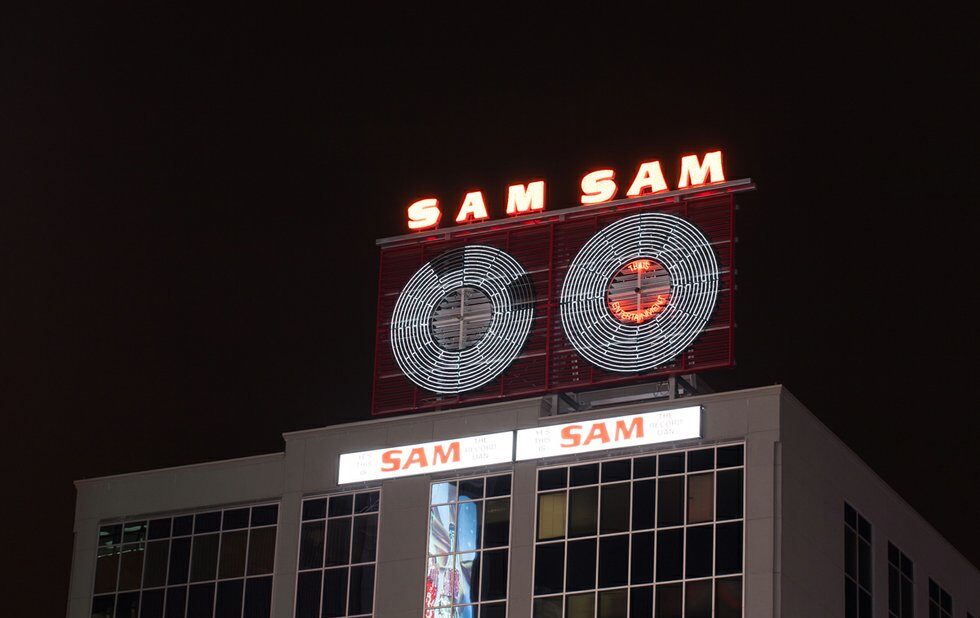 The Sam the Record Man sign will light up Yonge-Dundas Square until January 3, at which point it will be switched back off before a public lighting ceremony the week of January 8.

When it comes to quintessential Toronto retail landmarks, you’d be hard-pressed to name a more iconic site than Sam the Record Man’s flagship store. Originally opened in 1959 at 259 Yonge before moving to its 347 Yonge location two years later (where it stayed until its 2007 closure), it quickly became a must-visit destination for Canadian music lovers thanks in no small part to its towering neon sign of two spinning discs.

After Ryerson University purchased the site in 2008, turning it into its Student Learning Centre, the fixture went into storage for almost a decade. But since the city loves preserving the signs of its cultural history (arguably more than the actual culture itself), plans were immediately afoot to remount it.

Following numerous discussions between the school and city council about the sign’s fate, it has appeared at its new home atop the Toronto Public Health building at 277 Victoria, on the northeast corner of Yonge-Dundas Square. The sign has been installed, but the initial social media response has been underwhelmed.

The sign has been lit and will continue to be lit every night until January 3, at which point it will be switched back off before a public lighting ceremony the week of January 8, according to a spokesperson from Ryerson. But though the records will spin again, “Final work on the signs is ongoing,” says the spokesperson.

What’s taking so long? Read on for a timeline.

With Sam Sniderman’s business rapidly growing, Sam and Jack Markle were hired to construct the first sign, which was 7.5 metres wide, 8 metres tall and used mechanical flashing units to create the illusion of a spinning record. The fixture replaced earlier neon signage, including a thermometer and barometer that displayed local weather conditions.

A second sign was constructed by Claude Neon Inc. In the same year, open-face neon letters spelling out “SAM” were added above both signs (which took 550 light bulbs to illuminate), and a back-lit sign reading “Yes this is SAM the Record Man” was added below.

Six years after Sam the Record Man filed for bankruptcy in 2001, citing poor sales due to competitors like HMV (whose next-door Yonge flagship has also since closed) and Walmart, along with the rise of the internet as a music distribution platform, Sniderman’s sons, Jason and Bobby, announced that the flagship store would close permanently on June 30, 2007. A Facebook group and online petition went up almost immediately to save the store’s signs, drawing over 18,000 supporters. An auction of memorabilia and signage was scheduled, but Toronto city council voted in favour of designating the entire property a heritage site. (The Ontario Heritage Act has no provisions to protect store signs.)

In January, Ryerson purchased the property for $23 million directly from the Sniderman family to expand its campus, entering into an agreement with the city to store, restore and re-install the neon signs.

The sign was lit up for the last time on October 4 as part of the city’s Nuit Blanche festivities. The building was demolished in early 2010.

Construction on the Student Learning Centre began and was completed in 2015. According to its contract with the city, the university was obliged to restore and remount the sign on the SLC or around the corner on its Gould Street library, but later claimed the neon would clash with the modernist architectural design and potentially pose safety risks if damage were to cause mercury spillage.

The school instead offered to place a “commemorative insert” on the sidewalk where the store once stood, an explanatory plaque and an online tribute to Sam’s and the Toronto music scene.

City council voted 24 to 18 to refer the issue back to city staff, refusing to let Ryerson out of its agreement to remount the sign. 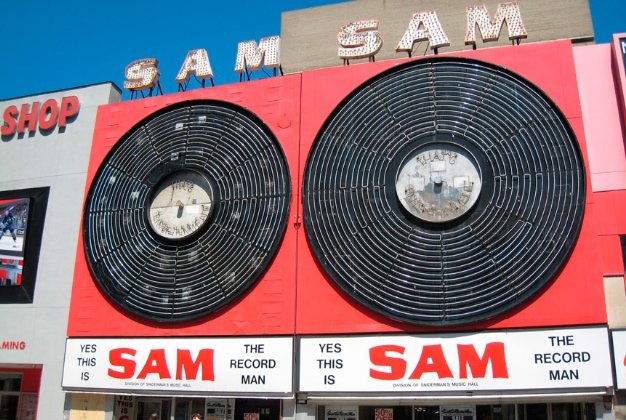 The iconic spinning records were landmark on Yonge Street until Sam the Record Man’s flagship store closed in 2007.

A revised agreement was struck between city council and Ryerson to place the sign atop the Toronto Public Health building on the east side of Yonge-Dundas Square, which the university would pay for. Sunset Neon was selected to do the refurbishment and began work in spring 2016.

“Although many of us were disappointed that Ryerson did not include the signs in its design of [its Student Learning Centre], as it had promised to, I believe the compromise is good for the city,” veteran music journalist Nicholas Jennings, who led a campaign to save the Sam’s sign, tells NOW.

“The giant spinning neon discs of the Sam the Record Man signs are symbolic of Toronto’s and Yonge Street’s prominent place is music history, so having them on display again will serve as an important reminder of those glory days and an inspiration for the city’s continued role as a great music city.”

In an interview with The Globe and Mail, Sunset Neon craftsmen Tony Bianchi said 25 people were involved with the restoration, including the Markle brothers and the original’s glass blower, Len Black.

After the sign was originally scheduled to go up this summer, it was installed in late November. The official relighting ceremony will happen the week of December 8, but while work continues, the signs are up and spinning.

Many people on social media expressed initial disappointment at the translucent look of the sign, a result of the need to preserve it against wind resistance since it does not stand against a solid backdrop. But apparently this is not the final version.

In the meantime, a saga that has lasted a decade continues to spin on.