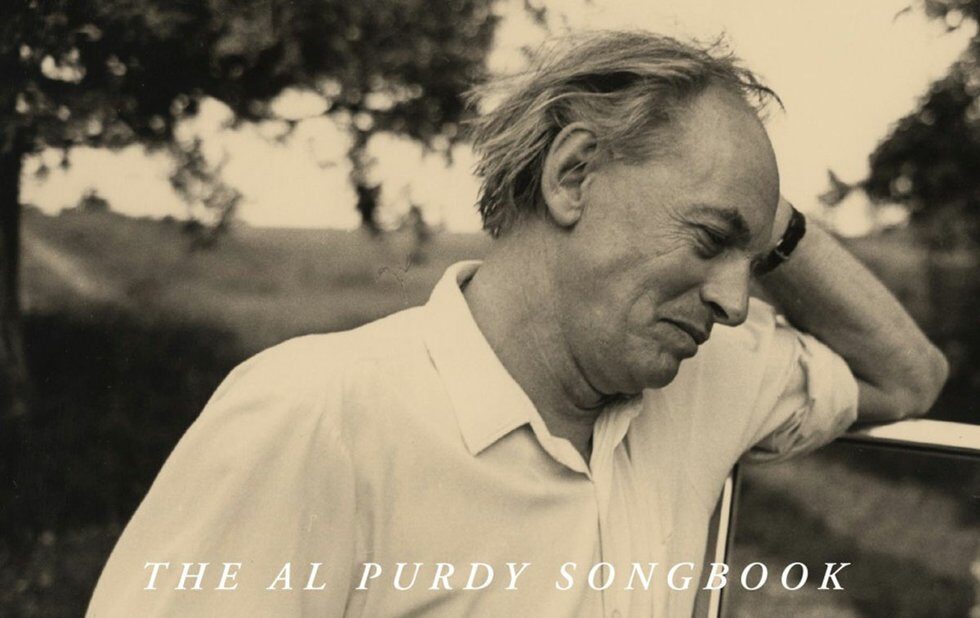 Brian D. Johnson has some kind of intuition. He had a feeling that the 2015 benefit for poet Al Purdy’s A-frame literary retreat could be a creative opportunity.

As literary heavyweights got set to take the Koerner Hall stage alongside indie music icons, Johnson suggested that organizers film the event. Oh yeah, and think ahead: there might be an album of tunes inspired by Purdy’s poetry in there somewhere.

The shoot became the basis for Johnson’s fine film documentary Al Purdy Was Here and now the three-disc Al Purdy Songbook, curated by Johnson and indie scene-maker Jason Collett, is available for purchase – online and at many bookstores. (It’s available for sale as a digital download or DVD, Blu-ray, CD, plus 40-page booklet online through Borealis.)

Why Al Purdy? Johnson says his voice was unique.

“Purdy was creating a new Canadian voice at a time when CanLit was dominated by the British and the Americans. Purdy staked out the country in a way nobody else did. He travelled the breadth of Canada. He’s famous for At The Quinte Hotel, a poem about drinking in a bar.

“If the Group of Seven were a bar band, they’d sound like Al Purdy.”

But who knew that a writer who emerged in the 60s and died in 2000 could have such an impact across generations and genres? Doug Paisley and Felicity Williams discovered Purdy in their teens. Neil Young was so enamoured of the project that he contributed the rights to his live version of Journey Through The Past from his famous 1971 Massey Hall concert. And an array of indie icons stepped in, too.

Then again, Johnson says, there’s always been a fit between poets and musicians.

“Among songwriters, there’s always a reverence for the purity of poetry and its status as an exalted art form, even though Purdy did his best to cheapen it at every turn.

The next step was finding someone to wrangle all the musicians.

“When I decided to do the film and the songbook, everybody said, ‘Find Jason Collett.’”

Good thinking. Collett, indie artist and ex-Broken Social Scene member, has always loved the idea of bringing literary and musical talent together. He’s been programming his Basement Revue – half music, half literary – for over 12 years and relishes these kinds of collaborations. In this case, he and Johnson invited songwriters, including Gord Downie, Snowblink and Sarah Harmer, to choose a poem, lift the words, use them as inspiration, develop a mash-up, anything that would move them to compose.

“The project became a great way to expose audiences to poetry,” enthuses Collett. “Poetry takes on a new life when it’s read, when you hear the timbre of the writer’s voice, and then it takes on a whole other new life when it’s connected to music. That can turn to fromage pretty fast, but I like that high-wire act.”

Besides, says Collett, turning lyrics over to other artists can be very fruitful.

“Several things happen at once. We honour our history – something we’re not always really good at in Canada. And you can make great links.

“You had a young Margaret Atwood and Michael Ondaatje [who both appeared at the benefit] making pilgrimages to the A-frame just to soak up the vibe Al laid down. Then there’s musicians that Atwood and Ondaatje can hand the baton down to. I like the thread that runs through all of this.”

And, key to the Songbook, a songwriter will eat up a set of great lyrics.

“When you give musicians an assignment, they like the parameters,” explains Collett. “Most of the time, the melody comes first for them, and they’re waiting around for the lyrics to emerge.” Such was the case with Harmer’s exquisite Just Get Here – a highlight in the film – whose melody had languished on the shelf for some time.

But Johnson gets the sense that these musicians also coalesced around the idea of artistic community.

“There’s a nostalgia for a time when poets went on TV and were at the forefront of public discourse and media,” he says. “The entertainment section wasn’t window dressing at the back of the book. Arts were a part of political life and Al represented the idea that we need our own culture.

“And many of these artists [on the album] romanticize the notion that artists would get together in a cabin in the woods to talk and argue. Writing, whether music or poetry, is a lonely business, and that kind of community is important.”