After impressing us with their debut album, the Toronto prog-pop band had to overcome a series of trials to make the next one. This interview took place over three years. 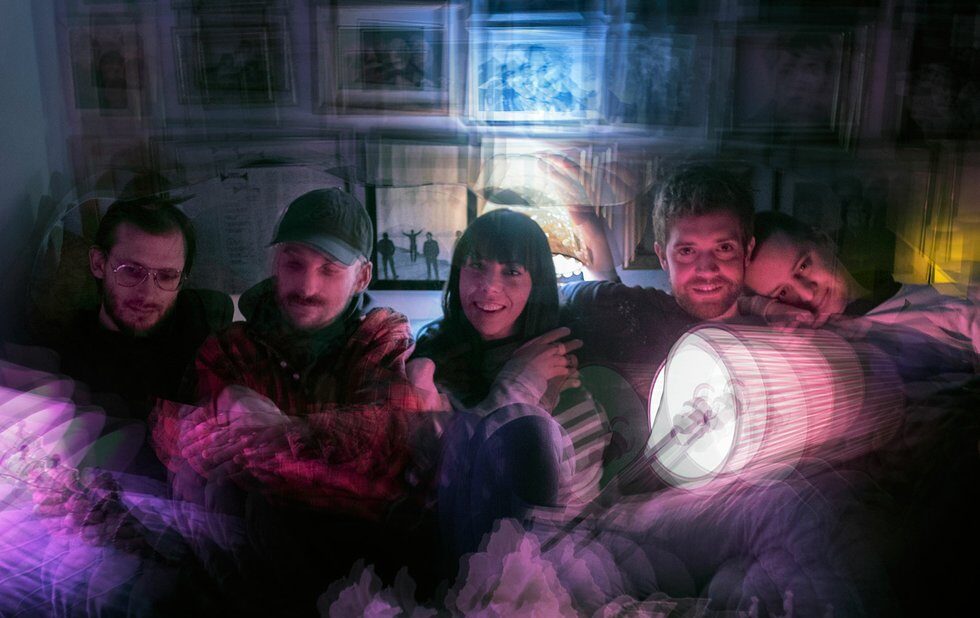 During a recent concert at Monarch Tavern, Christopher Shannon of Bart announced that their forthcoming album has taken three years to produce, at a rate of 10 recorded minutes per year.

Since I first chatted to the Toronto band about the record in winter of 2017, Bart’s members have undergone a series of trials including a terrifying panic attack, a partial loss of two fingers and their drummer’s departure. But they’ve endured it all to produce Today, Tomorrow, & The Next Day (out May 10), a stunning and complex set of songs that was worth the wait.

It started in 2016, right after the release of the band’s debut album Holomew, when Jeff McMurrich (producer and co-founder of the band’s label, Idée Fixe) offered them a window at his Sonology recording studio the week before it officially opened. The band didn’t have any material ready, but they went anyway.

“We went to the studio with nothing,” says Shannon. “We recorded the drums there, officially, and me or [Bart co-leader] Nathan [Vanderwielen] would get in there with an instrument, a guitar usually, and we would play and make up the movement of a song. Everything was just based off that.”

In separate conversations, Shannon and Vanderwielen each describe Bart’s intuitive, collaborative process as a way of tricking themselves into writing music without over-thinking. Shannon even says that for him, the best part of making music has always sprung from a collaborator doing something that he would never think of, something that gave it life.

That spontaneous process could potentially produce a train wreck of an album, but Today, Tomorrow, & The Next Day feels succinct and carefully crafted, despite the kinetic crackle of the performances. Labyrinthine sections of prog-inspired madness give way to soothing moments of panoramic beauty reminiscent of Big Star and Fleetwood Mac. Clocking in at a lean 33 minutes, it’s as dense as records get, containing a broad universe of impressionistic symbols and tangents.

Getting there wasn’t easy. In the fall of 2017, Shannon blocked off 10 days at his family’s cottage on a remote island, determined to record the final vocal tracks for the album and “put a bow on it.”

Surveying the record under the self-imposed deadline, Shannon started questioning the whole project and quickly spiralled out of control. “I felt like I was having a heart attack,” he says. “I was on an island, an hour and a half from a town. I lost all balance, couldn’t stand… I was sweating, my skin felt super sensitive.” He crawled across the floor and lifted himself onto a bed, ready to call an ambulance if things took a turn. Instead, he lost consciousness and slept for 16 hours. “It was a really intense moment.”

With the tracking finished, the band applied for a grant to get the record mixed (they were hoping to hire local musician’s musician Sandro Perri). The application was rejected with discouraging grades from the committee, killing morale and momentum. The tracks sat dormant for seven months before Shannon and Vanderwielen finally worked up the gumption to mix it themselves, with some help from McMurrich. They started formulating a plan for release, but there were more bumps ahead.

I ran into Shannon a few months after I’d heard the final mix, at a café he used to work at on Roncesvalles. He told me that their erstwhile drummer, Jason Bhattacharya, had left the band and Vanderwielen had cut off the ends of his right ring and middle fingers in a woodworking accident. It wasn’t clear whether he’d even be able to continue playing guitar.

As it turns out, Vanderwielen is a very lucky unlucky person. He’s left handed, but plays guitar right-handed, meaning his dominant hand – which is also his fretting hand – had been left unscathed. Live, he’s the band’s drummer, with Stefanie McCarrol of Brave Shores joining the group on guitar and vocals. Bart’s tendency to move members around and swap instruments, in addition to being useful in this case, keeps things fresh and ensures that everyone is familiar with how the individual parts complement each other.

At the Monarch show, Vanderwielen relished playing the invisible comedian, tucked away behind the kit but ever-present on his mic. He mock chastised his bandmates for tuning their guitars too often and asked the audience “Was that okay?” after almost every song. The smoke machine, which had been blasting at an alarming rate during the first two acts, had been turned off at the band’s request. I recalled that in our conversations, Shannon seemed disdainful of contrivances.

A central paradox of Bart is that they often sound like prog rock (the most high-falutin musical trend of the past century), but present their music with a decidedly un-prog-like earnestness. A sense of vulnerability and playfulness stems from the fact that the band is making music to please and occupy themselves alone, without a care for what external criticism or praise might fall on it – a tough gambit for a guitar band in the era of trolls.

Between songs, with three guitarists and a bassist tuning, the crowd fell silent. Someone reminded Vanderwielen that he was in charge of banter. “We practiced this!” Shannon cried, mock exasperated.

“Those other bands had it easy with all that smoke,” Vanderwielen said to the audience. “We’ve gotta look you straight in the eye.”