"I just got to that point where I wasn’t sure if people needed another record." 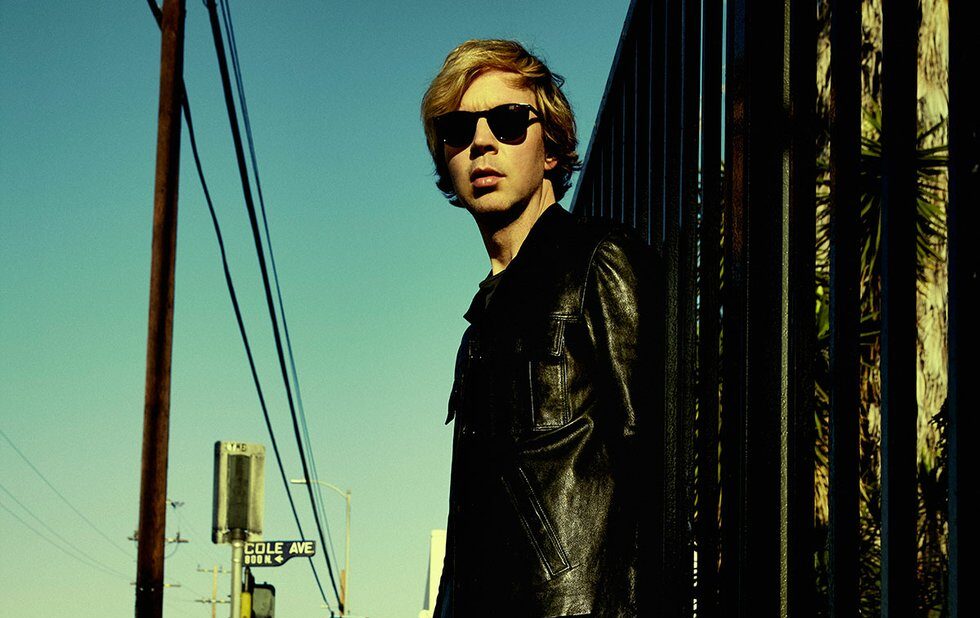 When I meet Beck at a suite in the Four Seasons in Yorkville, he’s on a day off from the second stint of a tour that recently took him to Winnipeg, where he met a 93-year-old aunt he hasn’t seen since he was a kid.

Beck is such a quintessentially laid-back Californian, it’s strange to think a whole side of his family is Canadian. But here he is, bringing up a picture on his phone of his great-grandfather behind the wheel of Winnipeg streetcar number 176.

“It’s funny, you hear all these stories and then somebody comes up with a photo and you’re like, ‘Wow, this is real,’” he says. “That’s over a hundred years ago. It’s a miracle this photo exists at all.”

You’d think the trip through Campbell family history would put Beck in a reflective mood, but he’s all about moving forward. In fact, when it comes to classic 90s albums like Mellow Gold and Odelay, the singer/songwriter, who’s about to release his 13th studio album, Colors (out October 13 on Capitol/Universal Canada), verges on anti-nostalgia.

He’s spent years perfecting his new energetic kitchen-sink pop album with co-producer Greg Kurstin (Adele, Sia, Tegan and Sara) and yet he’s already thinking ahead to the next album.

You’ve been opening for U2 on their Joshua Tree 30th anniversary tour. Are you a big enough fan of that album to hear it every night?

Yeah, I mean it’s an iconic record. For the mid-80s, that is the record. Pretty much that and Appetite For Destruction. I can’t really think of any records more legendary from that period of time.

Could you ever see yourself doing that kind of tour?

I don’t think I have a record that’s that definitive.

Really? What about Odelay?

Maybe not Odelay… It’s from another time. I don’t know if it translates to now as much.

But it’s such a classic!

I think when you go back and listen to your old albums, you hear the shortcomings and things you want to make better. You’re trying to reach this unattainable goal that you’ll never reach. But you give it another go and think you might this time crack it. That’s what makes you make another record.

Do you think you got there on Colors?

We got pretty close. I’m sure I’ll hear it a month from now and think, “What were you thinking? The tambourine is way too loud!” But, you know, we definitely did our diligence. A lot of care went into it.

Your song No Distraction is about how we’ve become overwhelmed by access to entertainment and information. Do you think that’s changed people’s relationship to your music?

I know when I’m making a record or a song now, it’s not going to its own tunnel straight from me to a fan. It’s going into a giant pile of songs. I don’t even assume people know who I am. They might know one of my songs. They’re not necessarily going to know it was me, or care.

Does that temper the release of this album? You’ve been working on it since before Morning Phase in 2014.

Well, part of the reason it took so long to come out was because Morning Phase did way better than anyone was expecting. But I’m kind of glad because the record was supposed to come out last year and last year was such a strange time. Some music has its time and it wasn’t the right one.

This is such a jubilant, content-sounding album. I can see how that might not have fit the mood.

I mean, hopefully happiness is timeless. It’s more about making it so that it doesn’t sound fatuous or trite. I look at the spirit, the affirmation, the uplift coming out of gospel music. It feels visceral, connected to real powerful emotion.

The production on this record is so lush and precise.

I’m very selective about the equipment we use. We’re not using the latest, greatest software necessarily. It might be a 1954 Les Paul gold-top through an early 60s AC30 amp and a Fairchild compressor or a Univox guitar pedal. Stuff that’s technically lo-fi because it’s from 50, 60, almost 70 years ago. Artifacts. What you’re hearing is the best of all of it.

Even when I started I was always trying to make it sound state-of-the-art of whatever was happening, whether at that time it was the Bomb Squad or Dr. Dre, or now it’s Mike-Will or Sounwave. It may have come off as lo-fi and messed up but that wasn’t necessarily intended. We just didn’t have any money, and so there weren’t a lot of resources.

In the six-year gap before you made Morning Phase, you produced records for artists like Thurston Moore and Charlotte Gainsbourg. Were you finding more inspiration in other people’s music than your own?

I just got to that point where I wasn’t sure if people needed another record. There’s always a natural end to somebody’s career in music. I thought maybe the world was telling me, “This is good. Stop here.” I spent four years full-time working with other artists and producing. And that’s really gratifying because I am ultimately a fan.

So I get to work with Steve Malkmus and he’s making up some lyrics and I’m in heaven. Or, you know, working with Childish Gambino and trying to convince him to sing. I said, “You have a fucking great voice and people need to hear it.” He said, “Really?”

But that’s the thing with artists, even with myself: the thing that comes natural or is easy for you is the thing you discount the most. Sometimes you do need that other person, whether it’s a producer or band member. Somebody to say, “No, that is what’s great.”

That’s why it’s great working with Greg [Kurstin] because he’s so positive and we both generate a lot of ideas. That’s why some of the songs have, like, nine sections.

Even now thinking about it, I wish I could go in and do some stuff with him. I have all these ideas. I can’t wait.