It was an anxious year, and that was reflected in NOW's critics' favourite albums, which alternated between amplifying our insecurities and soothing them 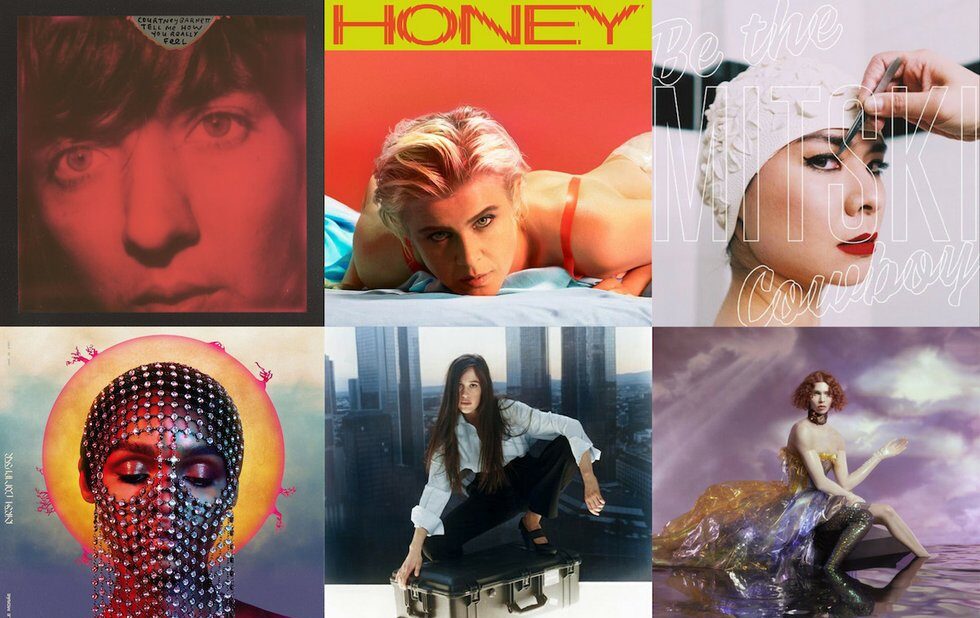 1. Courtney Barnett: Tell Me How You Really Feel (Mom+Pop/Milk!)

Let’s face it: 2018 was an anxious year. That suits Barnett, the poet laureate of your restless thoughts. On her most introspective album yet, the Australian singer/songwriter turned her sharply observed song studies both inwards and outwards, rambling witty tunes about crippling self-doubt and general lack of confidence (her words), the fear of being a woman walking alone at night and the anonymous trolls who spit gross venom online. She told us how she really feels, and we felt it too. RICHARD TRAPUNSKI

It’s a credit to Robyn’s genius that the eight-year gap between Body Talk and Honey never shook the foundation of her career. Robyn’s influence on pop music is so ubiquitous it’s easier to believe she’s always here, whether or not she is. Honey is a product of years-long reclusiveness and self-excavation after heartache. Over some truly sparkling beats and gooey tones, Honey is a warm, necessary record – a sense of optimism that works through sharp, searing observations of death and loneliness. SARAH MACDONALD

The Montreal producer and vocalist has been clubland’s deadpan commentator for a minute, but her fourth album goes deeper into more universal themes while keeping up the droll observations on dance culture. Over sharp analog productions – ranging from serenely ambient to terrifyingly chaotic – Working Class Woman excises personal demons while holding wider societal forces, like consumerism, to account. It’s an album that makes us want to sweat – hot and cold. KEVIN RITCHIE

It was a pretty obscure subliminal diss on the last song of this album that intensified his beef with Drake that exploded at Danforth Music Hall a few weeks ago, but everything leading up to it is a relatively unflashy distillation of everything you’d want from a Pusha T record: lean and unified Kanye West production, gritty coke bars and a ton of “yugh!”s. The push-back against bloated streaming-era rap albums has finally come, and this 7-song beast is its medallion. If you know, you know. RT

5. Mitski: Be The Cowboy (Dead Oceans)

No one else in 2018 captured the beauty of loneliness and vulnerability like Japanese-American singer-songwriter, Mitski Miyawaki. Across 14 songs, her explorations traverse dramatic fuzzy drones, disco pop, deceptively cheery country and chilling slow-burners. Mitski sings openly about a woman’s insecurities, infatuations and imperfections, and whether these songs are autobiographical or a part of a larger theatrical persona, Be The Cowboy resonated with many millennial women. SAMANTHA EDWARDS

Just when we thought Monáe might be beginning to focus on her movie career, Dirty Computer arrived to remind us she’s an ever-evolving, multi-hyphenate renaissance woman. More comfortable than ever exploring political and sexual themes in her music, Monáe deftly and deferentially channels Prince, commandingly upgrades her rhyme skills and deploys self-affirmation anthems with ease. It’s a fastidiously curated and flawlessly executed mission statement. DEL F. COWIE

Chicago’s Noname makes good on the promise of her debut Telefone mixtape with the remarkably candid and vulnerable Room 25. Conceptually centred around her move from the Windy City to Los Angeles and the dissolution of her first romantic relationship, the rapper’s offbeat, spoken word-influenced delivery is anchored by ace collaborator Phoelix’s nimble live instrumentation. Alongside Saba, Smino and crown prince Chance the Rapper, Room 25 ensconces Noname high in the current cohort of Chicago’s arresting hip-hop scene. DFC

Self-love in the face of hatred is something that had to be taught within the Black community as a means to survive and thrive in inhospitable conditions. Negro Swan is singer and producer Dev Hynes’s soundtrack to that experience. Each song is a little gem, jam-packed with hard truths and empowered voices. It’s an album of real world lullabies. It’s also a lovely ode to the flowers that grow between cracks. CHAKA V. GRIER

The quintessential pop diva had us at “get the fuck out.” Carey’s 15th album is her best in a decade and her most cohesive and R&B-focused in a long time, and it’s putting her back on the radar of those who’ve foolishly written her off. On Caution, she continues to sharpen what she does best: playful, melancholy and tricky wordplay, beautifully layered vocal production and seriously sticky melodies. She’s still one of pop’s funniest (and shadiest) songwriters. If she stays this good, we’ll be spread out in lingerie on chaise lounges, listening for years to come. KR

When Sophie shared the video for It’s Okay To Cry, the first single from her debut album, many longtime fans were surprised to see who the star of the visual was: the British producer herself. After building a reputation as an elusive prankster known for making some of the most disorienting, sugar-rush electronic pop in recent memory, Oil lifted the curtain to further reveal her songwriting talents, without sacrificing the warped textures and synthetic melodies people have come to expect from her. MAX MERTENS

Note: this list does not include albums from Toronto artists. Find those on our 10 best Toronto albums list.