What does Toronto sound like? This year's best local albums, as voted by NOW critics, offered many different ways to hear it 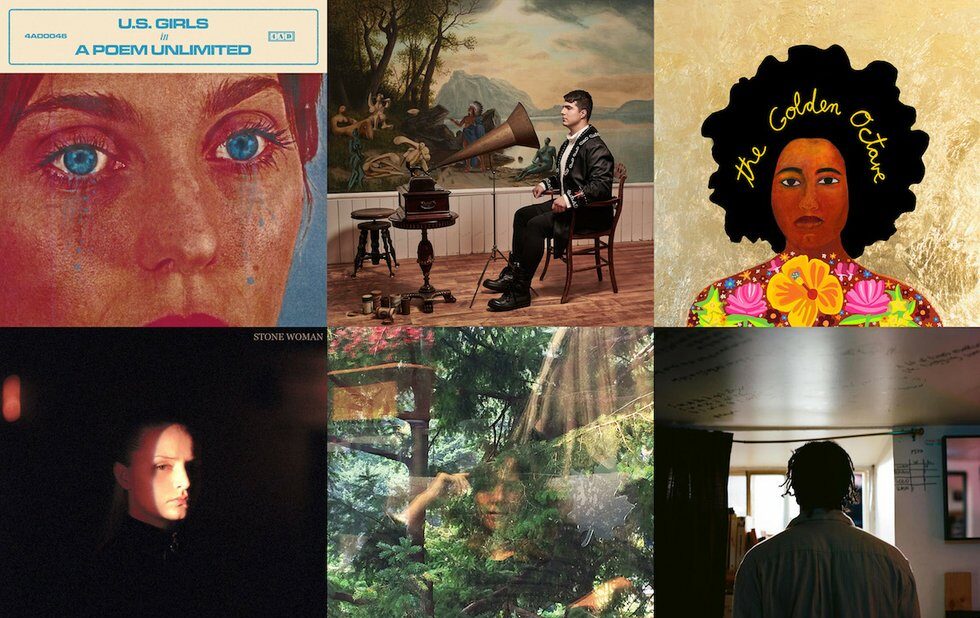 The album that best summed up America this year came from Toronto. Meg Remy (who, sure, is originally from Chicago) shined up her incisive political pop and, with help from local instrumental wizards the Cosmic Range, presented it as lush big band disco-rock. And then, suddenly, the zeitgeist caught up to her. She’s always had a knack for exposing America’s dark underbelly through her character-based songs, but in a year when sexual impropriety and abuse of power was under the microscope, U.S. Girls’ songs found receptive ears. RICHARD TRAPUNSKI

The winner of this year’s Polaris Prize was an album written in a language currently spoken by fewer than 100 people. Dutcher’s compositions – traditional songs from the Wolastoq First Nation that he recovered from both his elders and through intense musicological research – are both a fascinating document of music threatened by cultural genocide and some of the most beautiful sounds we heard all year. With his soaring, operatic voice and head-turning songcraft, the Indigenous Next Wave sounded more breathtaking than ever. RT

Stone Woman’s sublime electro-R&B songs course through your veins. Wilson levelled up her production after her debut, Work, innovating through much more rigid self-discipline and passion for the, well, work. With meticulously crafted lyrics, lurid crooning and sighing, Stone Woman gives us a scope of how much Wilson will be able to excel on a full-length. Hopefully soon. Six songs is not enough to satiate us. SARAH MACDONALD

She’s been on the local scene since the early 2000s, but Castle’s work just keeps blossoming. After 2014’s Pink City crystallized her grounded but mystic folk-rock, Angels Of Death was worth the wait. With her powerful, quivering voice and dynamic instrumentation, she sings about love and loss while delving into angelic symbolism and exploration of muses. Castle continues to prove herself as a world-class talent who could just as easily be singing in a living room in Guelph. NICK FLANAGAN

Seven years after their debut LP, Bernice finally came back with this short and sweet collection, an eclectic mix of breezy indie pop, smooth R&B and jazz embellishments that take each song into unexpected directions. All of this sounds like a lot – and it is – but Bernice’s lead songwriter Robin Dann’s silky vocals keep each track anchored amidst all the whimsical idiosyncrasies. Here’s hoping they don’t take so long for LP number three. SAMANTHA EDWARDS

What is the Toronto sound? On Lush Life, Alanna Stuart and Ian “Pho” Swain showed us that it could be bolder, more glamorous than what we’ve come to know. The album’s eclectic sounds – from Afro-beat chants to fierce vocals that hearken back to UK house – brought in a world’s worth of sounds and reached beyond our borders. “These days I don’t think I belong anywhere,” Stuart sings on Medicine For Melancholy, and maybe it’s that searching quality that makes it such an exciting listen. CHAKA V. GRIER

The title of Ayo Leilani’s debut album as Witch Prophet was inspired by the singer’s fascination with mathematical sequences and how they relate to her energies. A fitting choice, given how the record’s 11 cosmic R&B songs tackle themes including mental health, motherhood and self-identity. Featuring cameos from Lido Pimienta and the Cliks’ Lucas Silveira, and production from Leilani’s partner Sun Sun, The Golden Octave feels like a celebration of not only herself, but Toronto’s DIY community. MAX MERTENS

This is the sound of control slipping through your fingertips like an endless cascade of content on autoplay. Careening by in 16 minutes, What Do You Stand For? contemplates personal autonomy in an age of algorithmic order, reflecting the absurdity of modern life back onto itself with acerbic vocals, raging guitars, furious drumming and funhouse rhythms. An absolutely potent hardcore record front to back. MICHAEL RANCIC

Techno artist Eel explores themes of love, pain and self-reflection in his follow-up to 2017’s Very Good Person. The seven-song LP features the kind of intense EBM that has come to represent Toronto’s electronic sound – and Eel’s skilled blending of distorted synth melodies and polyrhythmic beats proves he’s one of the city’s best. Eel builds on the energy of every track to show off his true techno chops on Garden Of Roses. It’s the ideal 3 am rave banger that makes dancers fall to their knees. MICHELLE DA SILVA

After literally turning his life into a movie in 2017 and transforming his basement apartment into a museum earlier this year, Sean Leon has settled into his signature cinematic style. The Parkdale rapper’s life plays like a score, seamlessly moving through the highs and lows of his story, from airy and optimistic to gritty and sullen, over one 32-minute track. (A 12-track version was later released, but the longer unseparated track is the better way to hear it). SUMIKO WILSON

Being Human In Public by Jessie Reyez

The Secret Life Of Planets by Zaki Ibrahim

Dose Your Dreams by Fucked Up

Head here for our 10 best albums from outside of Toronto and check out more best and worst of 2018 stories here.