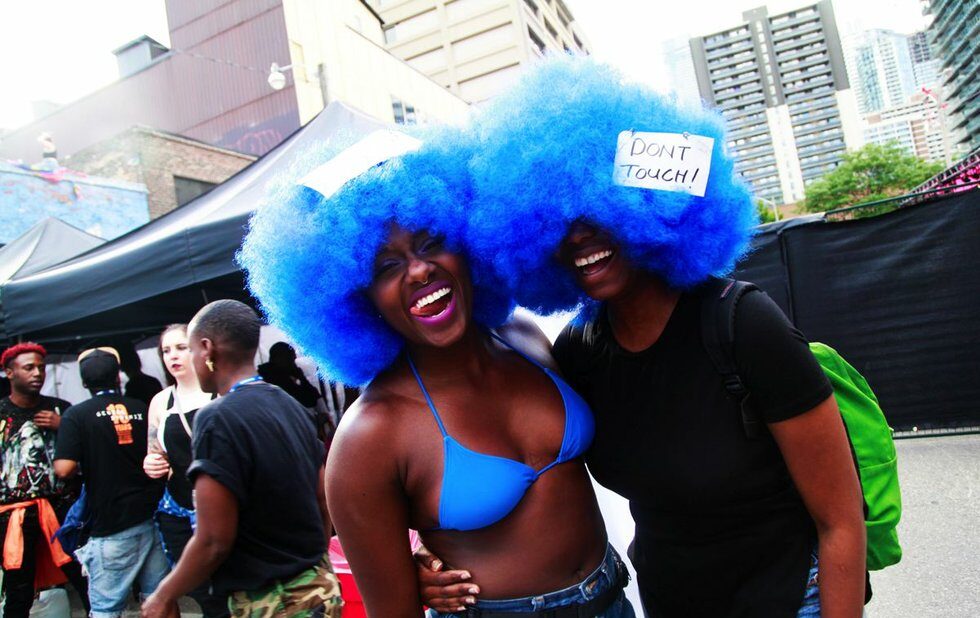 This summer Blockorama marks 20 years as one of Pride Torontos most celebrated and game-changing parties. Some of the most exciting international and local artists from the Black diaspora Diana King, SATE, Crystal Waters, Ignacio Rivera, Prancing Elites, to name a few have graced its stages. And while the past two decades have presented Blockorama with challenges, the partys triumphs have out-matched them every time.

Organizers Nik Red and Craig Dominic spoke to NOW about the programs trailblazing founders, Black Lives Matter and unforgettable moments that not only emboldened a community, but transformed Pride.

Nik Red: In 1998, Jamea Zuberi remarked how the gay pride parade resembled carnival in Trinidad except for the lack of colour and diverse voices. She started discussing the idea of [iconic Trinidadian one-pot dish] Pelau a float in the Pride parade so that Black people can see themselves there.

She gathered friends Angela Robertson, Junior Harrison, Courtney McFarlane, Douglas Stewart, Camille Orridge, Dionne Falconer, all organizers in their various communities to make it happen. They realized that it wasnt feasible to enter the parade at that time, [but] they could create a safe space for those in the community who were not quite out to celebrate their lives with DJs, dancers and drag queens from the Black diaspora.

These folks, now calling themselves Blackness Yes!, asked Pride Toronto for a space and were given a third of the parking lot across from Wellesley Station. Thus, Blockorama was born.

How did Pride receive Blockorama?

NR: Blackness Yes! had to work really hard to convince Pride Toronto for space, [however] the first Blockorama shattered a lot of myths. It was blessed by a wide variety of diaspora beats, from house to hip-hop, dancehall/soca to Afrobeat. This was the first time these genres were presented together on one [Pride Toronto] stage. Blackness Yes! broke down a lot of barriers and began sowing the seeds for other community-led initiatives like Yes Yes YAll.

Blockorama is living, breathing proof that we needed stages like BrownOUT and other community-led spaces to express and celebrate the diversity of the citys LGBTQ communities.

What are some early defining moments in Blockoramas evolution?

NR: Though new, Blockorama grew rapidly. So much so that Pride Toronto received sponsorship from TD Bank for the stage at the Wellesley parking lot that no one else wanted to use before. With more money came better infrastructure and it became the main stage of Pride. Then, all of sudden in 2007, Blackness Yes! was tossed out. They relocated us to the parking lot of the Beer Store on Church, which was a disaster many emergencies in a crowded space with only one exit/entrance point.

Craig Dominic: After Pride tried to move Blockorama for the fourth time in five years in 2010, there was a huge town hall meeting at the 519. The community rallied behind us and let Pride know how important Blocko was. As a result they moved us back to our home at the Wellesley parking lot bigger and better than ever.

NR: From adversity you become stronger, and when we came back to the Wellesley stage in 2011 we were louder, bigger and, in some sense, more out. Maybe seeing all those beautiful faces in that space made folks more inclined to connect with others and be proud.

CD: The space began to expand in terms of representation, too. We intentionally sought out artists who represented the broad spectrum of people in our queer and trans Afro-diaspora communities. We also had mainstream artist who are allies wanting to celebrate with the Blockorama audience.

NR: It took the stopping of the parade in 2016, and presenting Pride with the 10 demands drafted by Blackness Yes!, Black Lives Matter and Black queer youth to actually see a significant change in budget for the Blockorama stage.

CD: Were really grateful. Pride changed how they fund our stage, but for the most part the rest is business as usual.

What are some unforgettable Blocko moments?

CD: Watching [soca singer/songwriter] Destra in 2015 when she got the whole crowd 4,000 people to march left and right. She also took two pics with me even though I was a sweaty mess.

NR: Its those moments that you wouldnt be able to recreate that stick in my mind. Spinning Days Like This [by Shaun Escoffery] during a downpour and seeing the crowd continue to dance in the rain until the sun and rainbows came out. It was magical.

The first time House of Monroe took the stage was electric. Ill Na Nas earlier performances lit up the stages. The drag legend Michelle Rosss tribute to drag performer Duchess was powerful. Not a dry eye in the place. En Vogue at Blocko the crowd lost it. I loved our Back To Our Roots events that were collaborations with other community organizations and commemorated Stonewall.

NR: It is going beyond Pride. We may need to expand to a two-day event because we cant fit everyone we would like into the lineup.