How legal are the cannabis sponsorships at Canadian music festivals? 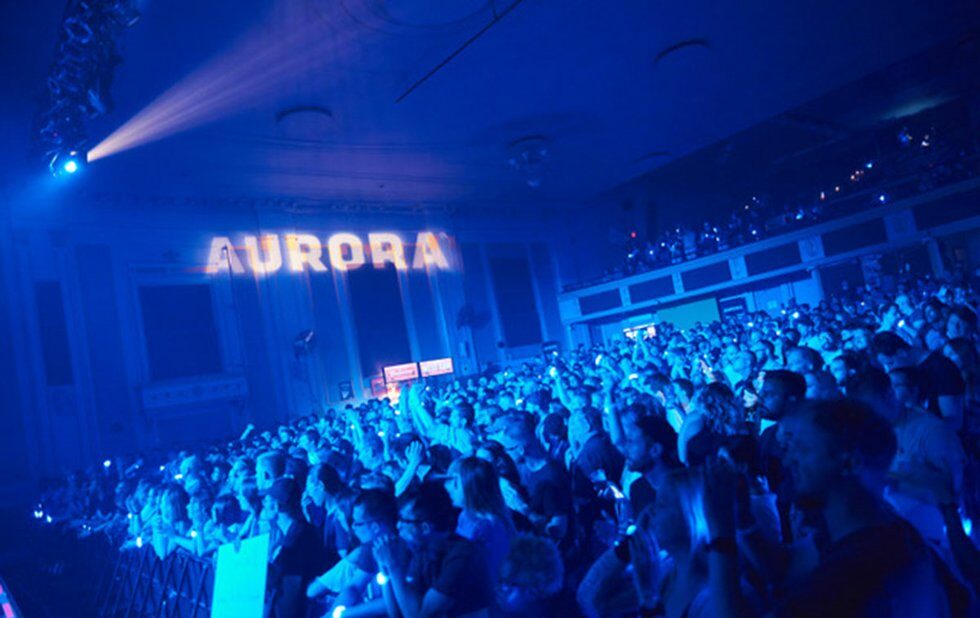 As synth-pop duo Phantogram perform their hit song, You Don’t Get Me High Anymore, tiny red and white lights gleam in sync with the music. The blinking radiates from wristbands handed out to concertgoers upon entry, each emblazoned with one word: Aurora.

The New York City band never once utters the word at the free concert at Danforth Music Hall this past July, but it’s all over the place. It’s projected in massive letters onto two walls of the venue and bartenders wear t-shirts branded with it. There’s an “aura” photo booth, which apparently captures the colours of your aura.

One of Canada’s largest federally licensed producers (LPs) of cannabis, Aurora put on the show as part of their summer Illumination Series. According to their website, the series celebrates “music, arts, legalization and culture in all its diversity.”

Throughout the summer, Aurora has organized concerts across the country, including City and Colour in Iqaluit, Kings of Leon in Calgary, Arkells- in Charlottetown and, this past Monday (August 6), Post Malone at the Mod Club.

Music and weed have always been culturally entwined, but this new relationship is decidedly more corporate: indie and DIY music fests can profit off cannabis partnerships, while big cannabis companies can advertise to a specific, young demographic.

Despite the plethora of sponsorships, though, it’s currently illegal under the Narcotic Control Regulations and Food Drugs Act, the laws cannabis presently falls under, for cannabis producers to advertise to the general public. Last month, Health Canada released a statement expressing its concerns regarding LPs sponsoring music festivals. It noted that producers who do not comply would face serious consequences, which may include fines up to $5 million, imprisonment or suspension of growing licences.

Lawyer Eileen McMahon, an expert in Canadian cannabis regulations and partner at Torys LLP, notes that when recreational cannabis is legalized in October, the Cannabis Act will further limit the ability of companies to advertise. “Health Canada is very clear about sponsorships. The Cannabis Act prohibits the use of a trademark of cannabis in the context of a promotion.” McMahon elaborates that under Canadian laws, a logo, slogan or even a single word are regarded as a “trademark.”

In the aftermath of Health Canada’s warning, “[Aurora] is reviewing all promotional material associated with the [Illumination concert] series to ensure compliance with regulatory requirements,” says Heather MacGregor, director of communications at Aurora in an emailed statement to NOW.

Health Canada noted that it’s currently “reviewing the actions of existing licensed producers and will be taking every step to bring them into compliance.”

Yet some LPs are moving ahead with their planned festival sponsorships. Along with the Illumination Series, this month Aurora is co-presenting Manifesto Festival (August 9-19, mnfsto.com), while fellow Canadian cannabis company Tweed has partnered with Camp Wavelength (August 18-19, Fort York Garrison Common, campwavelength.com) to sponsor the festival’s campfire comedy series.

In planning their event partnerships, Tweed hired lawyers to carefully pore over every aspect of the regulations to ensure all their efforts were above board. “As these regulations change, we’ve read them very closely to find ways that we can get out there and have a little bit of visibility with future consumers,” says Jordan Sinclair, vice president of communications at Canopy Growth, which owns Tweed. Tweed has been participating in hundreds of events across Canada this summer, from Pride parades to a Kendrick Lamar concert at Budweiser Stage in June, in which they decked out the venue in banners bearing their logo.

Sinclair notes that for Tweed, setting up a booth at Field Trip in June, where they gave out free swag and had a giant lit-up, pun-worthy “Hi” sign ready for social media photo-ops, isn’t any different than getting a booth at the Lift Expo cannabis conference. “People walking by can ask us questions about our products and we’ll answer them. It’s the same kind of engagement whether it’s at a music festival or business conference.”

Under the Cannabis Act, the rules around advertising will be even more rigorous than they are now. Along with prohibiting any advertising that appeals to young people or that uses celebrity endorsements, it also restricts advertising that presents cannabis “in a manner that associates it with a particular way of life, such as one of glamour, recreation, risk or excitement.”

“We’re not blind to the fact that [cannabis] is a stigmatized plant that’s been prohibited in Canada since the 1920s. The regulators that are behind this don’t want it bright and flashing in people’s faces right out of the gate,” says Sinclair. “I think the regulations in year 10 will different than in year one.”

Indeed, a decade from now, it wouldn’t be that surprising to see a venue like Budweiser Stage, formerly the Molson Amphitheatre, get a corporate weed rebranding.