NOW MagazineMusicFeaturesChvrches are optimistic about feminism’s impact on pop music

Chvrches are optimistic about feminism’s impact on pop music

"These things come in waves,” says Lauren Mayberry. “In 10 to 15 years, what’s happening now will make it better for the next generation of musicians.” 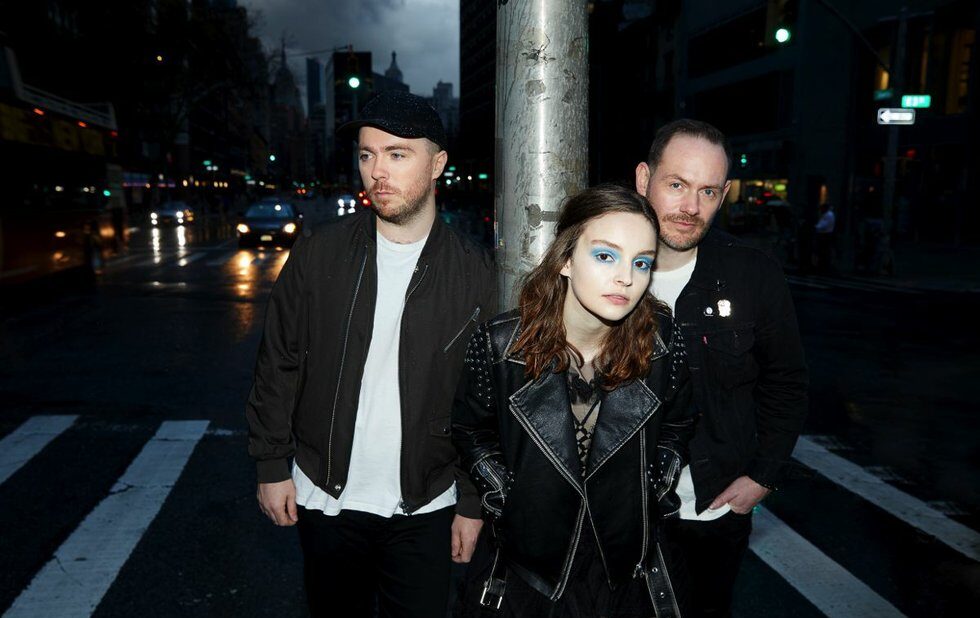 Despite the big pop sound Chvrches deliver on their new album, the Scottish trio are remarkably down to earth.

As soon as they walk into the small lounge of a downtown office where I’ve been corralled for the past 30 minutes, the band apologizes relentlessly for their tardiness.

“Yeah, being five minutes late is okay….” adds vocalist Lauren Mayberry, implying anything longer than that is unfathomable.

You’d never know that this is the same band that just put out Love Is Dead (Universal), their first unabashedly bombastic pop record, chock-full of glistening synths, punchy drum beats and singalong choruses.

Lead single Get Out is a festival-mainstage-ready anthem – fitting, since their NXNE Festival Village appearance begins a summer of headlining festivals across Europe and North America. On Miracle, Mayberry’s crystal-clear voice is deconstructed over big EDM beats.

It’s a departure from their 2013 breakout The Bones Of What You Believe and 2015’s Every Open Eye – which paired Mayberry’s fierce, multifaceted vocals with moody electronics. Or as Mayberry once described it, “Emo with synths in it.”

They feel Love Is Dead is the most accurate representation of who they are as a band.

“We’ve always felt like we straddle two different worlds: hook-driven pop music and dark electronic,” says keyboardist Iain Cook, who rounds out the trio. “Treading that line is quite a precarious thing to do, and on this record we’ve managed to make our poppiest music, but also our darkest and weirdest, too.”

The band wrote it in a small New York City studio and then recorded mostly in L.A. with Greg Kurstin, who produced Adele’s Hello and has worked with Tegan and Sara, Kelly Clarkson and Sia. It was their first time working with an outsider producer, an experience that energized the creative process.

“Some people have really lengthy careers doing the same thing, but how boring would that be?” Doherty says. “We found a very special rhythm working with Greg. It was this new kind of high.”

While Love Is Dead is Chvrches’ most mainstream effort, even debuting at number 11 on the Billboard all-genre chart, it’s also their most political.

On the deceptively upbeat Graves, Mayberry evokes the refugee crisis as she sings “they’re leaving bodies in stairwells and washing up on the shore, you can look away while they’re dancing on our graves” over shimmering, arpeggiated synth lines.

The dreamy Heaven/Hell is about her experiences as a woman in the entertainment industry.

“As a female in any industry, you have to be faster, tougher, smarter and better,” says Mayberry. “Now that we’ve reached a certain level of success, people speak to me with more respect at radio stations or in studios because they think I’ve earned that, and that’s not how it should work.”

Not that this is a new concern. Long before the #MeToo movement, Mayberry was calling out misogyny in the music industry. In a Guardian op-ed that came out shortly after their debut album, she wrote about receiving a barrage of rape threats through Chvrches’ Facebook page.

“I absolutely accept that in this industry there is comment and criticism,” she wrote. “What I do not accept, however, is that it is all right for people to make comments ranging from ‘a bit sexist but generally harmless’ to ‘openly sexually aggressive.’”

These days, Mayberry doesn’t take any harassment thrown her way personally. “It’s not about me as a person, but about a woman existing in a space that makes people feel uncomfortable.”

And as the post-#MeToo and #TimesUp reckoning continues, she’s starting to notice small, incremental changes in her own life.

“Two years ago, there were a lot of male journalists who would have asked me to please explain myself or justify these strange opinions,” Mayberry says. “Now they’re the types who are like, ‘Let’s talk about #MeToo. What’s changed?’ What’s changed? Well, you’re asking me that question.”

Although Mayberry is aware of the hypocrisy that exists within modern feminist movements – she points to people wearing “feminist” T-shirts on the red carpet but continuing to acting in ways that are oppressive to women – she remains optimistic about the impact of these conversations.

“At least in this moment, it’s making people have to be more conscious and aware. These things come in waves,” she says. “In 10 to 15 years, what’s happening now will make it better for the next generation of musicians.”

Our cover story on U.S. Girls, who play NXNE Festival Village on at Yonge-Dundas Square on Friday (June 15) at 7 pm.

Our NNNNN review of Azealia Banks’s last (and only) Toronto show. She plays NXNE Festival Village on Friday (June 15) at 8 pm.