At Choir! Choir! Choir!'s benefit for the long-running tavern/music venue at Lee's Palace, the staff gave thanks for the support of their community while holding out hope for its future 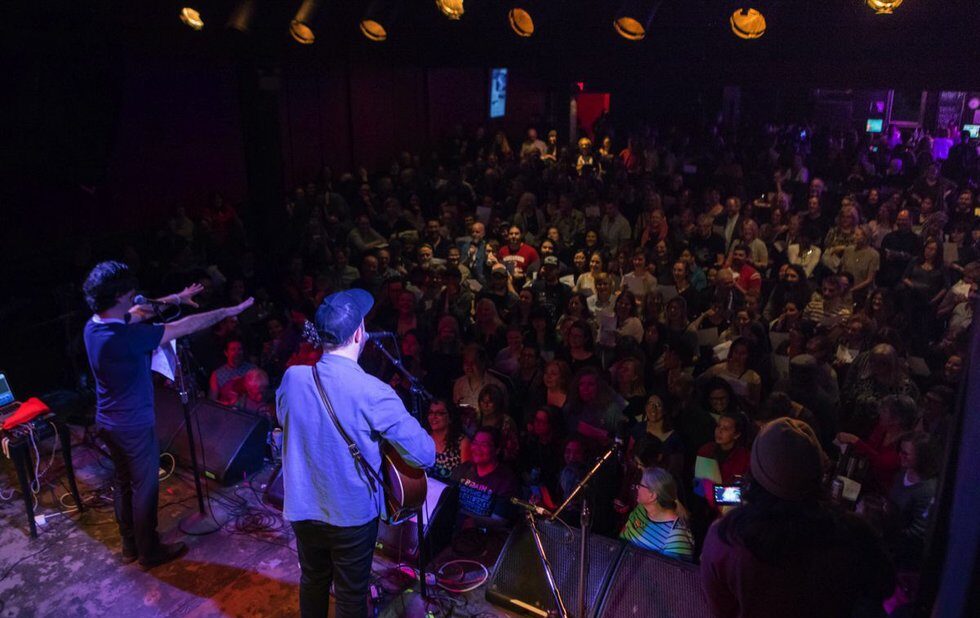 The long-running Bloor West tavern in Koreatown closed abruptly last week, but the communal choir still gathered for their weekly singalong last night (Tuesday, February 25). C!C!C! leaders Nobu Adilman and Daveed Goldman quickly pivoted the event to Lee’s Palace and turned it into a fundraiser for the now-unemployed Clinton’s staff to recoup their lost wages and help them through the coming weeks. And C!C!C!’s fans from outside of Toronto – who heard about the bar and wanted to help out, whether or not they had been there – set up a GoFundMe, which has raised over $3,000 at press time.

Lee’s Palace is significantly bigger than the back room of Clinton’s, but the venue was still mostly full with C!C!C! regulars and supporters of the long-running watering hole. C!C!C! have become the go-to conduits of mourning for icons like Bowie, Prince and Gord Downie, so they’re used to heavy or momentous occasions. But despite the circumstances and change of scenery, it still had the feel of a regular weekly gathering – light and friendly, with plenty of humour (I wasn’t expecting so many circumcision jokes quite so early in the evening).

After a brief preamble and vocal warm-up, Adilman and Goldman invited up the entire staff of Clinton’s. They crowded the stage behind events manager Lindsay Darling and general manager Christina Spencer, who both gave their first public speech since the bar closed. 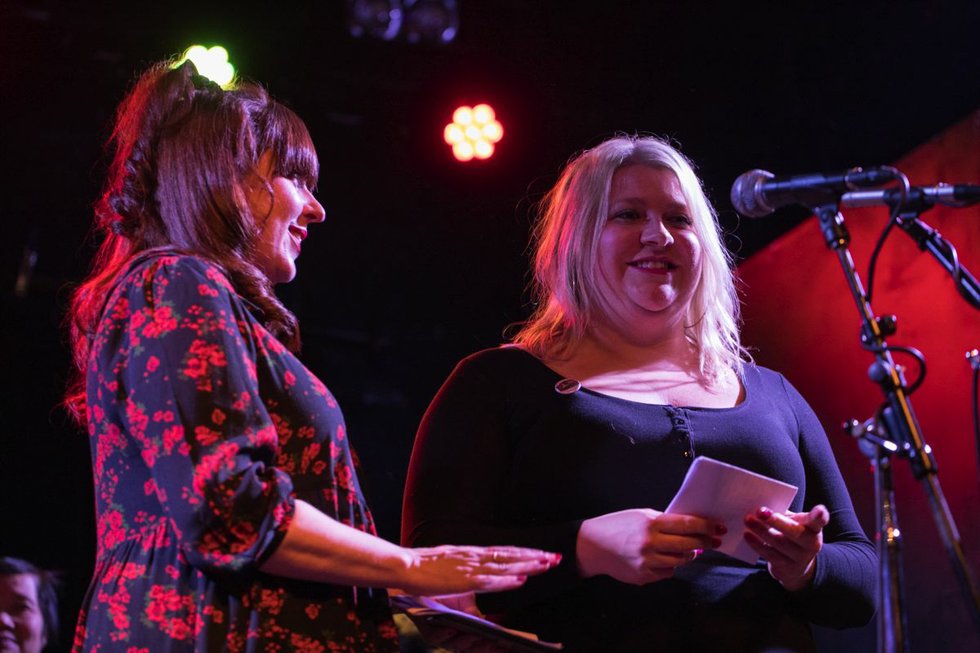 “We’re overwhelmed and grateful for all the support over the last few days,” said Darling, fighting back tears. “You’ve made us feel so wonderful after a sad few days. You’ve made it clear Clinton’s was so much more than a watering hole. It was a community.”

Over the precarious last year or so, she said, they were working for that community and for each other, Spencer said after, which made Clinton’s a family business whether or not they were all physically related.

“If all of this is over,” she said, with a major emphasis on the if, “we offer eternal gratitude to the staff.”

But despite the emotional speech, the bar’s staff were as cheerful and hopeful as the members of Choir! Choir! Choir!. And it was for the same reason: it didn’t feel final. Everyone in the room was hopeful and optimistic that Clinton’s could still return.

“There’s a narrative out there now because it’s so common to see venues shut down because of skyrocketing rent… that’s not the case here,” Darling told me over the phone the day before the event. The business owner of Clinton’s had disappeared after telling the staff the bar was closed for maintenance issues, she said, and they found out the building was for lease after digging around themselves.

But the property manager – the landlord who owns the building the bar is in – doesn’t want the business to change, they say. “He’s as committed to carrying on the tradition of Clinton’s as we are. He doesn’t want to just jack up the rent and have it become a condo or a Starbucks or St. Louis Bar & Grill. He wants to keep the character of Clinton’s.”

Now that the owner has been shut out of the business for non-payment of rent, the business is available for someone to buy and reopen. In our report on Clinton’s closing, we likened that to an investor à la Michael Wekerle, who bought the El Mocambo before it closed, but Darling and Spencer tell me they don’t want it to reopen as a state-of-the-art space after a multi-million-dollar renovation, but as a version of the Clinton’s that has existed for decades: a laid-back space with regular-friendly DJ nights and live music suited to the intimate back space. 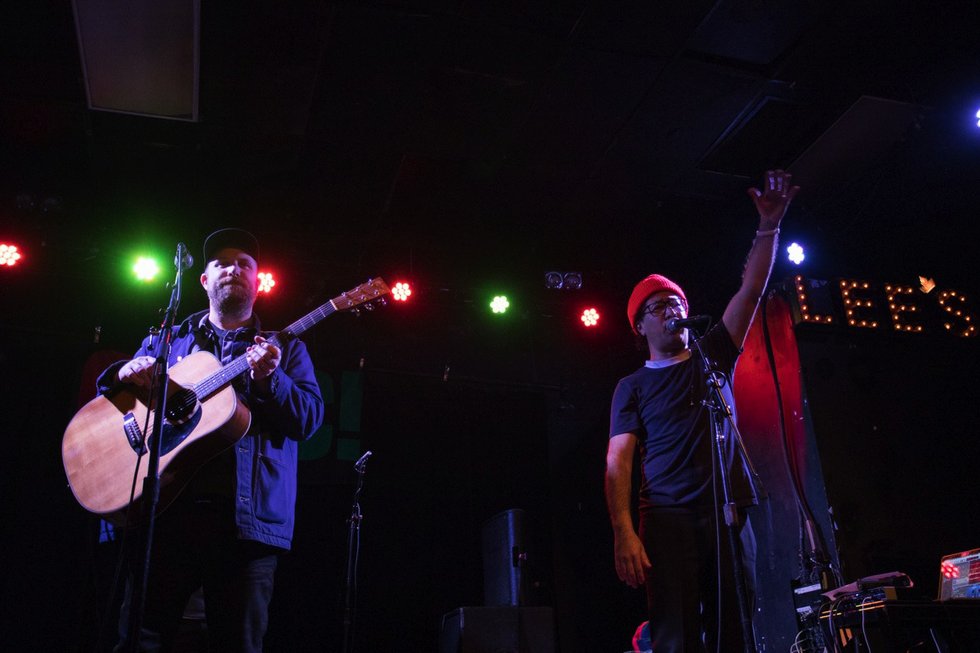 Goldman told the crowd he used to work at the brunch spot Aunties & Uncles for years while trying to get his music career going, and how it was part of a bigger picture. “These service industry jobs can be like creative incubation spaces,” he said. “They’re a part of the fabric of the city.”

For the staff of Clinton’s, the closure was abrupt. Everyone is now unemployed, and regular event workers like the DJs of Bangs & Blush/Worst Behaviour, Night Moves and the weekly trivia night are also effectively out of work. It highlights how much precarity is built into jobs in bars and restaurants, but also freelance and contract labour which increasingly makes up a large part of the city’s creative workforce. Without community support, there isn’t much of an institutional safety net.

At the end of the night, everyone joined to belt out Bill Withers’s classic song of friendship and support, Lean On Me. “I’ll help you carry on,” everyone sang, voices harmonizing from every part of the room. “Call me, when you need a friend.”

“Clearly this place means a lot to people,” Darling said during our earlier phone interview. “Hopefully someone will come in and love it back to life.”