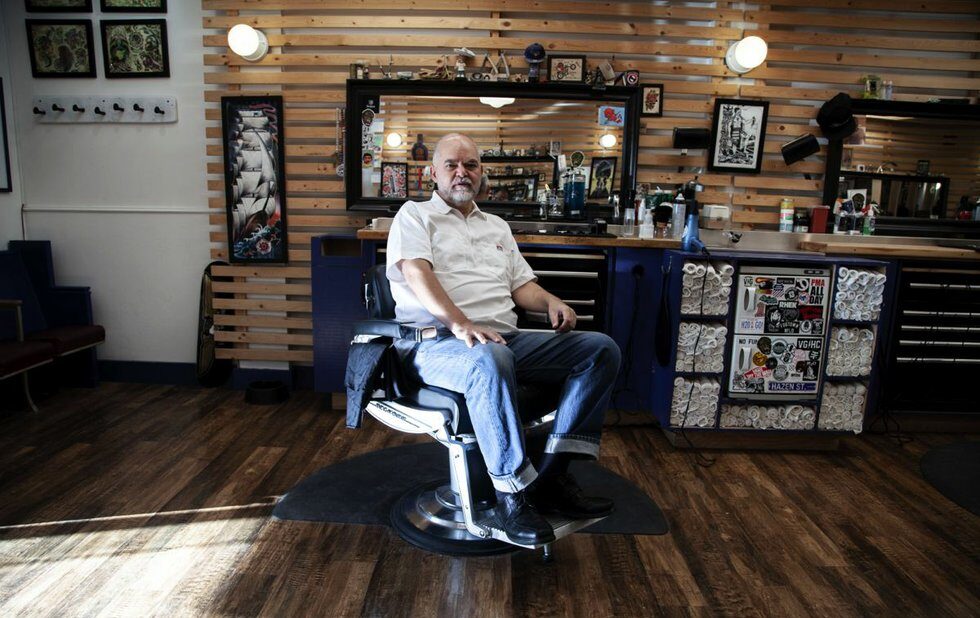 Since his time as an openly gay teen in Toronto’s first wave punk scene, Pyle has always had a unique perspective. His 2011 photo book, Trouble In The Camera Club, collects 35mm snapshots of early appearances by the Ramones, Patti Smith, Teenage Head and countless others. In addition to his celebrated surf-rock band Shadowy Men on a Shadowy Planet – best known for writing the Kids in the Hall theme song – he’s also drummed with the B-52’s’ Fred Schneider, did the Queer As Folk theme song with his electronic duo Greek Buck and is a composer for Baroness Von Sketch. Currently, he plays in the alt-country band Long Branch.

Over the past two years, Pyle has added another accolade to his résumé: beloved barber. At Ossington and Dundas hot spot Town Barber, he sculpts the hair of myriad local musicians – Sandro Perri, André Ethier, Martin Farkas (Career Suicide), Chris Colohan (Cursed), Chris Swimmings (Teenanger) – and gets to trade stories along the way.

This month is especially busy for Pyle, with Shadowy Men performing a three-night residency at the Monarch Tavern. Each show will feature new material in addition to songs dating back to the band’s formation in the mid-1980s.

We caught up with Pyle to talk about how his barber work and music work feed each other.

Was it tough making the transition to cutting hair full-time after so long spent solely on art and music?

In some ways, it was a reaction against music after dealing with so many frustrating technology updates, computer breakdowns and that kind of endless cycle. I wanted something social, creative and simple – which it didn’t end up being, of course. The social part was a huge attraction because when I was doing music composition, I became really isolated. I went back to school and now I have my first straight job in almost 30 years.

My interests always stem back to music and cinema. [Hair] is such a big part of the look of men. I look at haircuts all the time, admire them and have envy for beautiful hair. The cuts of 1950s and 60s are a big influence on my aesthetic, and almost all of my tastes come from the movie West Side Story.

Cutting hair seemed like it was something portable, where I could be mobile and do it into old age. It was also easy for me to look at most men and envision what I thought could make them look better. My uncle was in the army when I was a kid and I loved his haircut. That’s always drawn me to short hair.

You cut the hair of many local artists. Is it a way of keeping your two worlds connected?

Yes, that part has been fantastic! Quite often I think of it as being like a talk show. Someone sits in your chair for 30 minutes or a bit longer and we have an enjoyable interaction. The conversations I have with people are so much more fun than running into someone at a show where you have five minutes to talk.

It’s really cool when I cut someone’s hair and see they have a photo published shortly after. Recently a few people who won the Governor General’s Award were my clients and I gave them haircuts right before they went to the award show.

At first I was disappointed that more of my friends weren’t coming in. I understand, because some of my peers have been seeing another barber for 20 years. People from every area of my life have come in to let me cut their hair. Fortunately, a lot of them have come back, too.

Shadowy Men performs so rarely these days that every time feels like an event. What inspired you to do the three-night residency at a smaller venue?

We usually end up playing at a bigger place like Lee’s Palace. That doesn’t necessarily feel like pressure, but it needs to be more of a show. We definitely have some restrictions because of everyone’s busy lives, so doing three shows allowed us to play a lot in a place where we like seeing bands.

Funnily enough, when Dallas Good [of the Sadies] joined the band [in 2012], we ended up playing at the Cameron House and not selling it out. Sometimes playing a big show is part of the illusion that you’re a big band. We’ve had peaks and valleys of popularity in this city. At this point we do what we want to do.

What other projects are you involved with these days?

Cutting hair full-time is pretty demanding. I’m in two bands that rehearse weekly and play regularly, so that doesn’t leave a lot of time for anything else. I’m going to do a film score for [the artist] Wrik Mead, and [my duo with Dallas Good] The Filthy Gaze of Europe is working on another record, including a song with Limp Wrist’s Martin Sorrondeguy on vocals.

I feel like one of the very fortunate things about my quote-unquote “career” is that I’ve always followed my instincts. I just want to do things one 7-inch at a time.