The Toronto musician talks office jobs and the dangers of losing DIY venues – and premieres her new single, Turgid 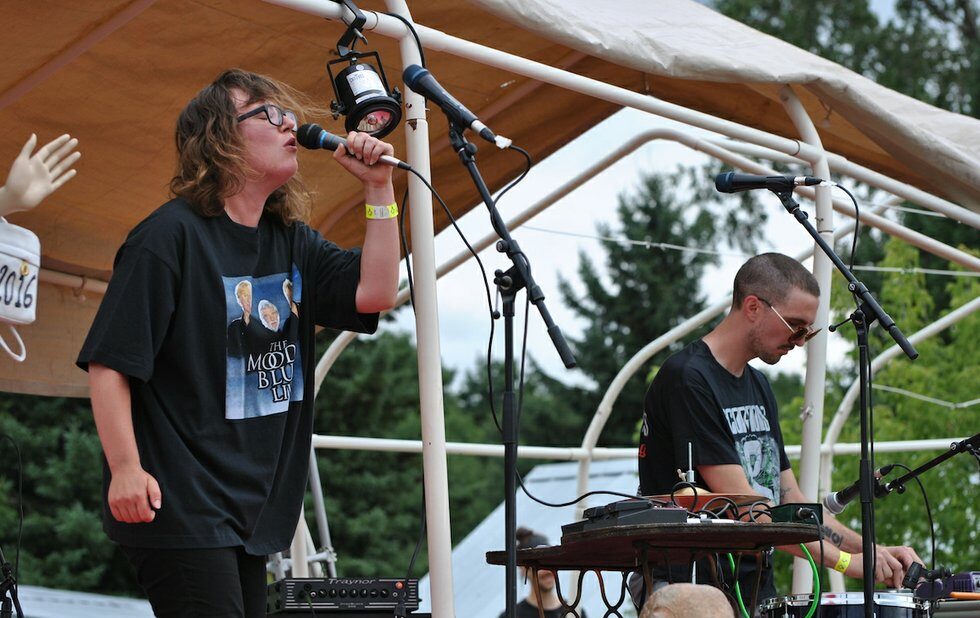 Outside of her 9-5 office job, Leslie Predy delves deep within herself to reveal a secret identity. As Doom Tickler, she unleashes guttural growls and spine-tingling shrieks against ominously pounding electronic beats.

During improvised performances, Predy might grab a glass of water and loop the sound of gargling, crunch a can in her teeth or lick an unsuspecting face in the crowd. She revels in this space of surprise, discomfort and humour.

“I’ve never known if I could be a professional artist,” Predy explains over a weekday lunch break. “I like having somewhere to go during the day and then having creative energy to devote to my projects during off-times. If I did that all day I don’t know if it would be good for me or if I could have the same intensity.

“Similarly, I like my live shows to be very intense, get into it for a certain amount of time and then take a break.”

“I find the history of medical illustration fascinating because of the way it treats death,” says Predy. “At first it was very taboo to cut open a body and learn about internal organs. We were afraid and didn’t know what was inside us. That ties back into my music, because I’m interested in bodily functions and the sounds we make.”

Though musical comparisons could be made to the physical confrontations of Pharmakon or the gory sonic exorcisms of Gazelle Twin, Predy’s singular vocals are inspired by metal and the expressionistic power of both Tuvan and Inuit throat singing.

“When I was a kid I would hold my pet hamster and give it a high-pitched voice,” she laughs. “I’ve always been interested in making weird sounds, but didn’t clue in that that could be music until I got into metal. Traditionally, people try to deliver lyrics in a certain style. I like to turn that on its head, conveying feelings and ideas only through sounds.”

Predy’s next performance brings her to the pews of the Music Gallery. It’s a long way from the all-ages shows in Edmonton basements and community centres where the project began years ago, and where diverse programming bridged pop, noise, hardcore punk and experimental music.

As Toronto’s DIY venues come under increased scrutiny, she fears such eclec-ticism and artistic incubation may be lost.

“If you kill venues, you kill the music scene,” says Predy. “Some other cities can have house shows, but the rent here is too high, so we’re dependent on DIY spaces. They’re different than a bar that’s just concerned with beer sales, because they nurture scenes around them. The audiences who come to these venues are there for the music.

“It’s hard to visibly support under-the-radar venues when the police are cracking down,” she continues. “Social media is how evil people are finding these spaces. Before Facebook existed, everything was further underground and people outside of the scene had a hard time finding these events.

“That was bad because it was closed off, but it was also safer from influences trying to shut them down. Now we need to band together and do something different.”