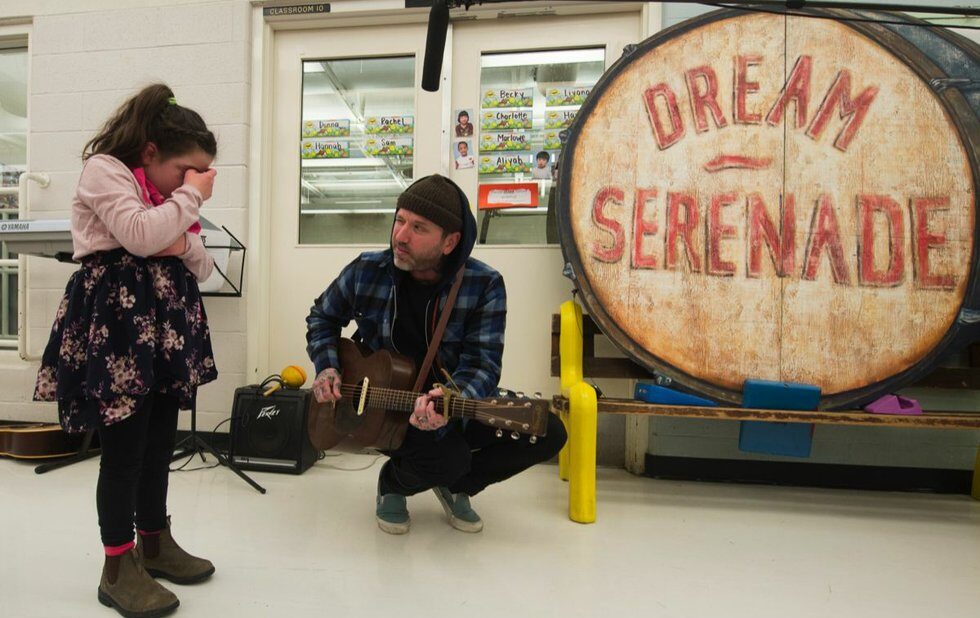 “Welcome to a regular, everyday music Friday,” says a guitar-wielding teacher at the Beverley School.

She’s being facetious. For starters, it’s Thursday. (The next day, November 16, is a PA Day.) But also, this is not the usual end-of-week singalong for the kids at the school, which caters to students with developmental and physical disabilities.

Instead, the atrium is packed with kids, parents and caregivers – the regular student body plus three other classrooms from across the city – for a private concert by many of the city’s indie rock stars: Hayden, Bahamas, Andy Kim and Kevin Drew, The Rural Alberta Advantage and City and Colour. Musicians play unamplified songs like Too Much Monkey Business and Ob-La-Di, Ob-La-Da, which are sometimes hard to hear over the ruckus but easily get the children and adults bopping and clapping along, or shaking noisemakers. 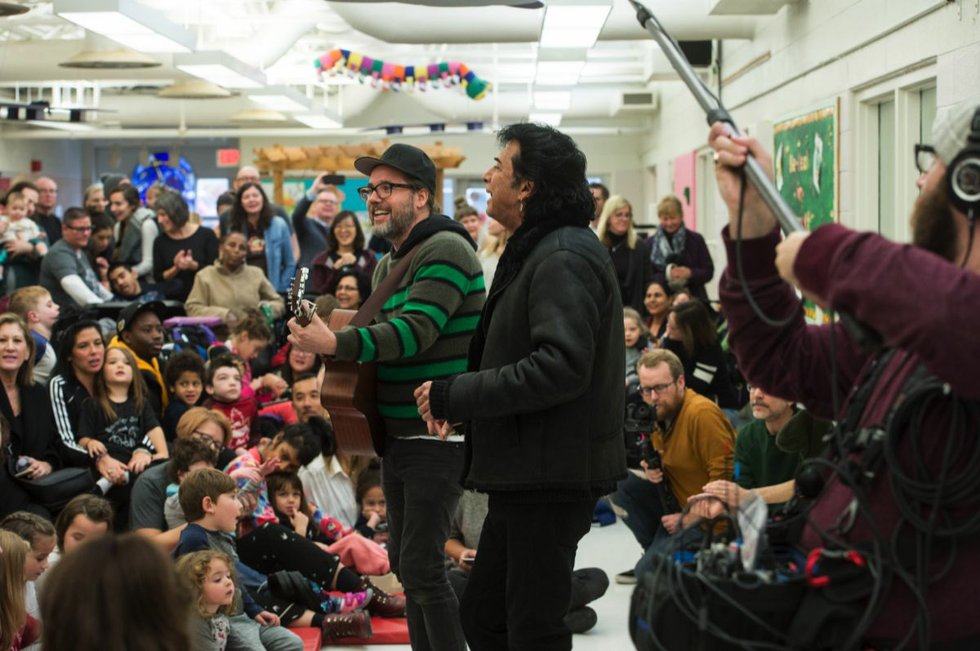 Kevin Drew and Andy Kim playing at the Beverley School.

It’s two days before the fifth annual Dream Serenade gala, started by singer/songwriter Hayden Desser and artist/production designer Christie Greyerbiehl. Their nine-year-old daughter, Grey, is a student at the Beverley School. Grey has a rare developmental disorder and is non-verbal, but she makes her excitement known, high-fiving City and Colour’s Dallas Green between songs and walking around like a celebrity, almost like she’s the host of the show. 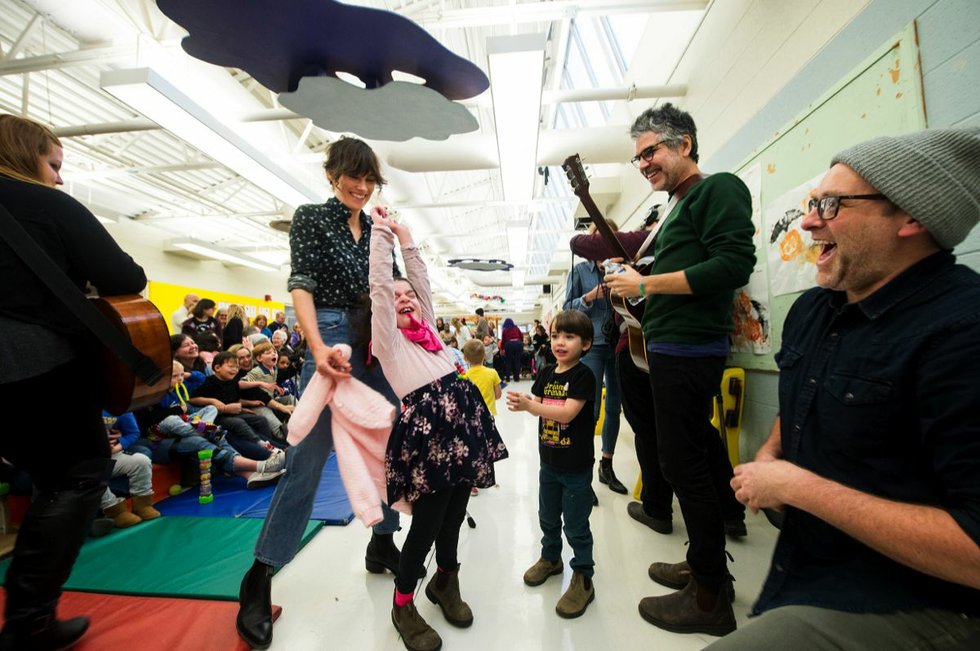 Christie Greyerbiehl and Hayden Desser with their children at Beverley School, along with Howie Beck.

“I think in some ways she feels like it’s hers,” says Greyerbiehl a few days later over the phone. “When we come to the school to do this show, she’s showing her friends, like ‘Yeah, it’s happening, I was telling you guys.’”

Being parents to children with exceptionalities, the couple says, is rewarding, but it can also feel lonely and overwhelming for parents who might not know what resources are available to them or that there are others out there in similar circumstances. Finding the community at Beverley School helped them while they were struggling, and that was the incentive behind starting the Dream Serenade five years ago.

The annual concert brings together a group of musicians – both announced and surprise guests – who play, hang out, collaborate and donate their time. 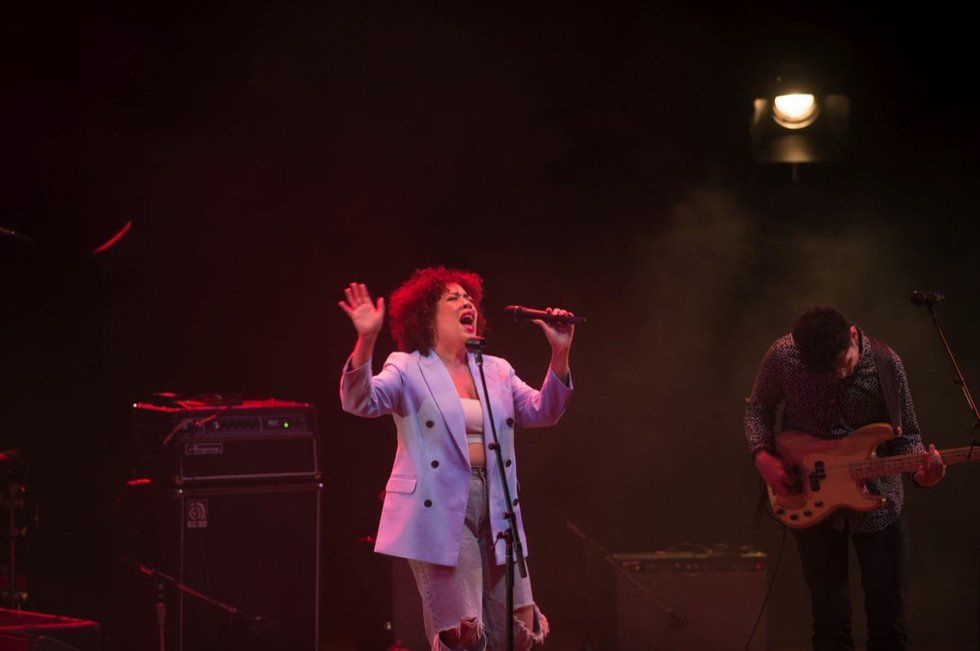 Weaves at the Dream Serenade at Roy Thomson Hall.

Two days after the Beverley School concert, on November 17, all the musicians are back at Roy Thomson Hall for the gala concert. They’re also joined by Owen Pallett (who debuts a couple of new songs on piano, alongside guitarist Thom Gill), Iskwé, Weaves and Kevin Hearn. The night starts with a surprise performance of Sugar, Sugar by Andy Kim (he wrote the song for the Archies in the 60s and dedicates it on this night to all the “Bettys and Veronicas, Archies and Jugheads in the crowd”), continues with highlights like a heart-wrenching cover of Willie Nelson’s Always On My Mind by Hayden and a performance of Gord Downie’s Chancellor by Kevin Drew, with members of Skydiggers and Barenaked Ladies. (Downie was a surprise guest at a previous Dream Serenade, and he still feels like a major part of the event.)

Backstage, acts are greeted with homemade tote bags drip-painted by kids at the school and filled with things like Barberian’s and The Lakeview restaurant gift cards, Saddleback whiskey and custom Blundstone boots – all donated by the businesses. Long and McQuade donates the backline that all the acts share (which helps speed along changeovers). Even the sound technician is donating his time.

The dressing rooms, producer Dara Kartz shows me, are shared between sets, where acts like Owen Pallett tinker on the piano alongside Iskwé. Initially a necessity at the now-under-renovation Massey Hall – which barely had a backstage – the close quarters encourage the loose hang-out vibe. (The free Dillon’s gin drinks in the artist lounge doesn’t hurt, either.)

The night ends, as is customary, with a group singalong – this year’s a somewhat loose and giggly, but still powerful performance of Neil Young’s Helpless. 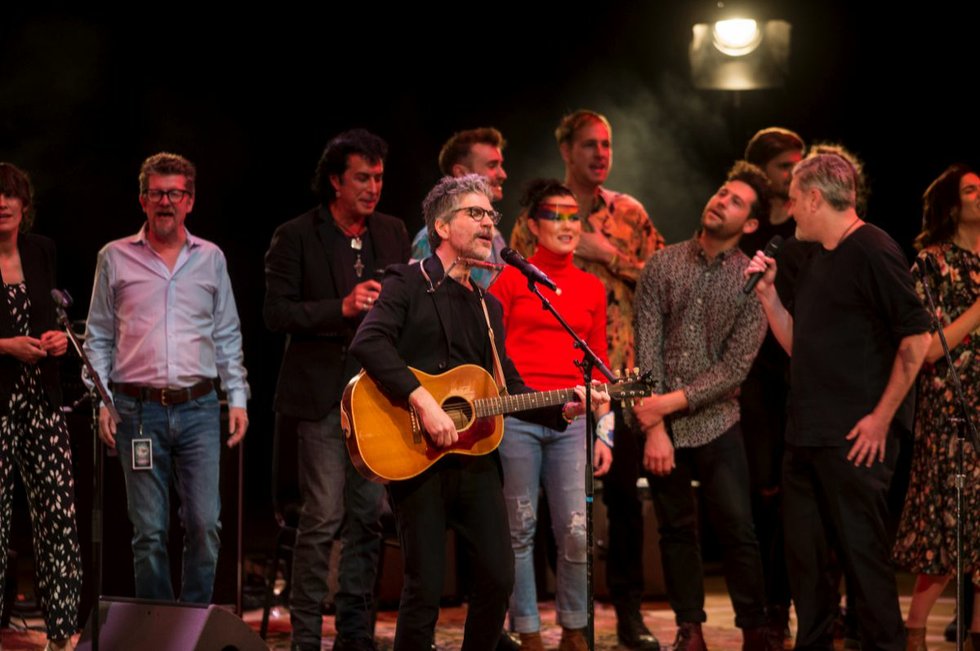 Hayden leads a group sing-along of Neil Young’s Helpless, a nod to the Bridge School Benefit.

It’s a purposeful nod to Neil and Pegi Young’s Bridge School Benefit, which Hayden played before Grey was born and which was a key inspiration for the Dream Serenade. Like that event, artists are encouraged to hang out and mingle, as well as watch the performances side-stage.

At intermission and before and after the show, there’s a bottleneck at the silent auction table, where people bid on things like wine, artwork, a Prince Edward County getaway, the CN Tower Skywalk and a fridge shaped like a Marshall amp. Last year, the surprise top-seller was a record-shopping date with Hayden at Tiny Record Shop – which went for thousands, but as Hayden told it between songs on Saturday, the guy who won was gifted the prize by his sister-in-law and actually wasn’t too familiar with his music. (“Sadly that’s a true story,” Hayden laughed on the phone later.)

The auction and the custom Dream Serenade merch – sold both at a table next to the auction and by a team of roving salespeople led by Beverley School teacher Sabrina Tayebjee Morey – are a way to keep the ticket prices low and make the event accessible to parents and teachers. (Some tickets are also donated to parents of very young children with exceptionalities.)

It’s a community event through and through, and it takes everyone – both Hayden and Greyerbiehl, Kartz, the venue staff at Roy Thomson Hall, the volunteers, the Beverley School’s principal Alana Grossman, people like the musicians, the artists and the sponsors – to make it happen. 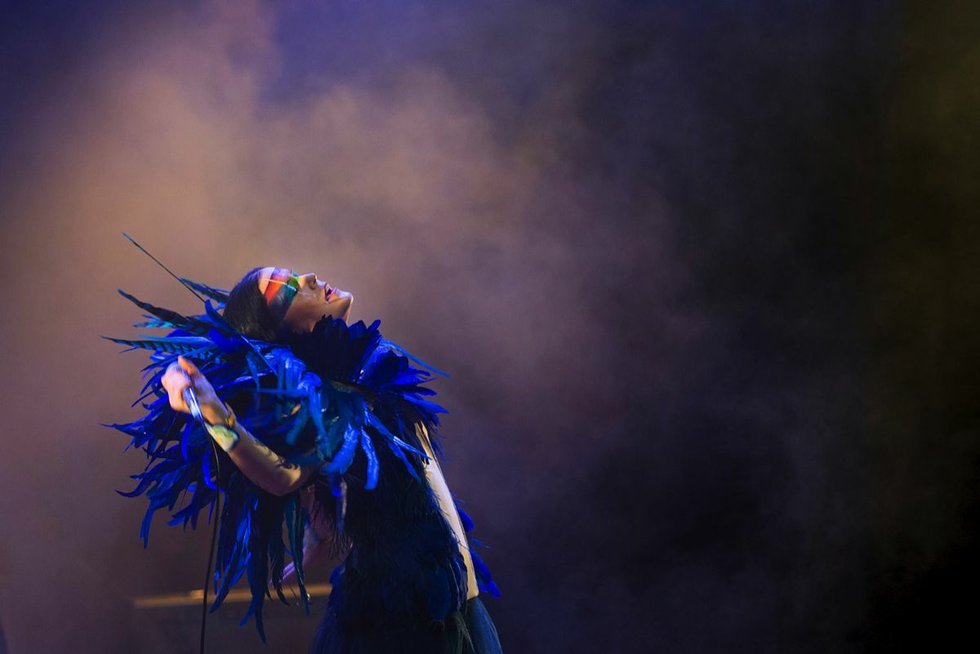 “We get a sense from talking to people after the show every year that it feels like a bit of a welcome,” says Hayden. “You’re not alone, you’re part of this community. There are resources for you. And I feel like that’s a really strong message for a lot of parents.”

The reach and impact has expanded every year, and so have the Dream Serenade’s initiatives. In the first year, the money all went back to the Beverley School, which used it to build a new accessible playground, which is under construction. There’s also a respite fund that lets parents apply for care while they go out for a date – something that seems small but which many people take for granted. They can also access tickets to things like the movies and the Aquarium, where they can take the full family.

“We know some parents who say the Dream Serenade is their only date of the year,” says Hayden. 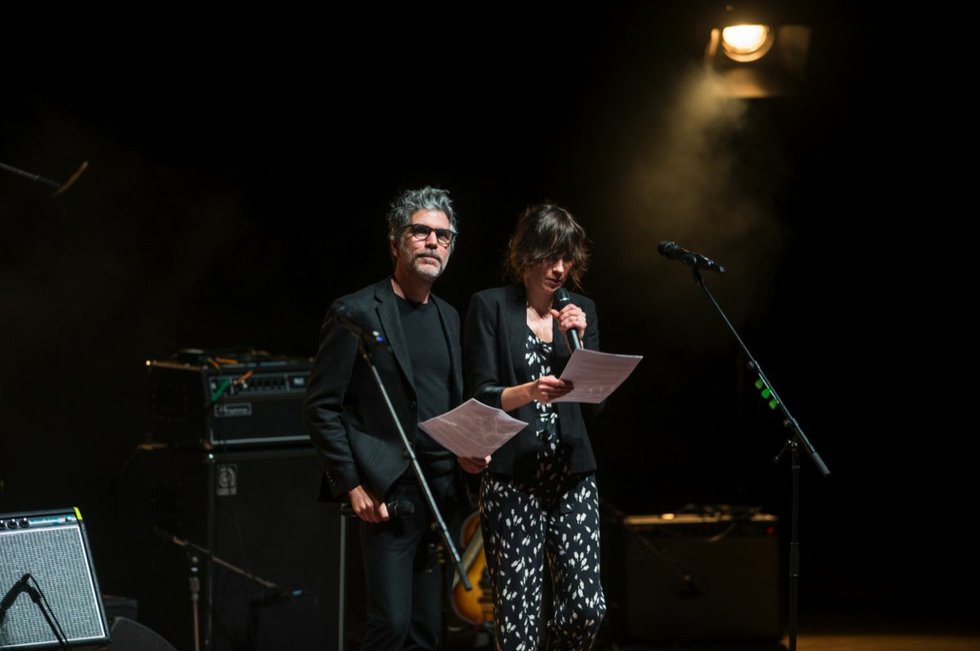 Hayden Desser and Christie Greyerbiehl talk about the importance of community support. Being the parents of kids with exceptionalities is “awesome and hard” says Greyerbiehl. “We are all dressed up but barely standing.”

This year, Hayden and Greyerbiehl are most excited about the camp initiative, which lets parents access bursaries through their school principals or social workers to access money to send their kids to camp, which can be very expensive and hard to navigate for children with special needs.

They never meant for the event to be huge – the ambitious start at Massey Hall was inspired by their first-year guest, The National, whose big draw let them book a bigger venue than the clubs they were eyeing – and the move to Roy Thomson Hall is a result of Massey’s renovation. Still, Hayden and Greyerbiehl stress that it remains an intimate event. Because of the generosity of everyone involved, it’s growing “in a community sense.”

“And that’s really exciting to me,” says Greyerbiehl. “It feels good that it’s still moving forward after five years.

“That’s not just because of us – that’s the community.” 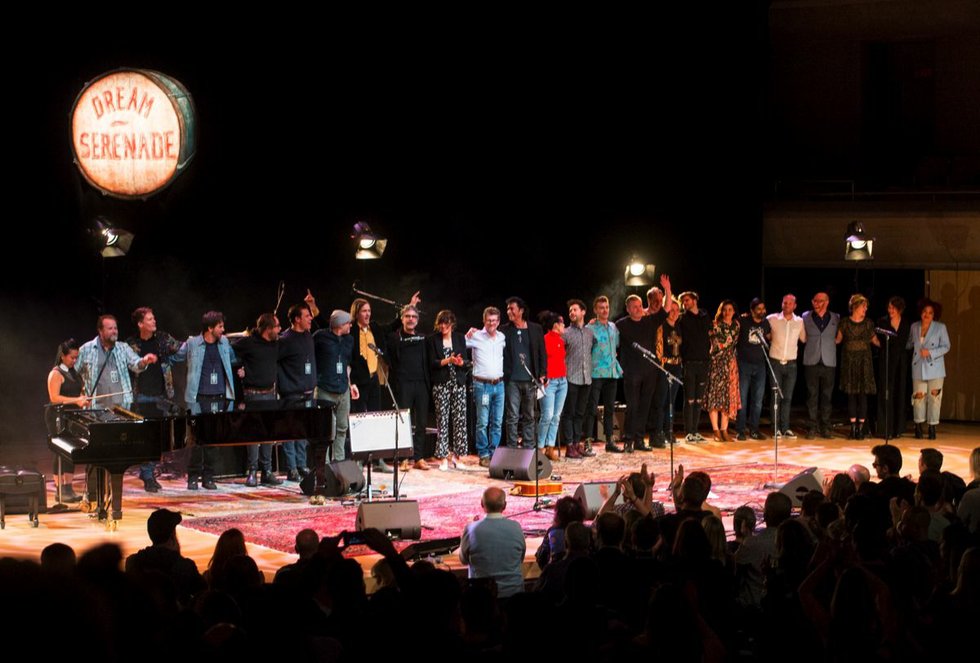