NOW MagazineMusicFeaturesAn ode to Toronto dance parties of the 00s

An ode to Toronto dance parties of the 00s 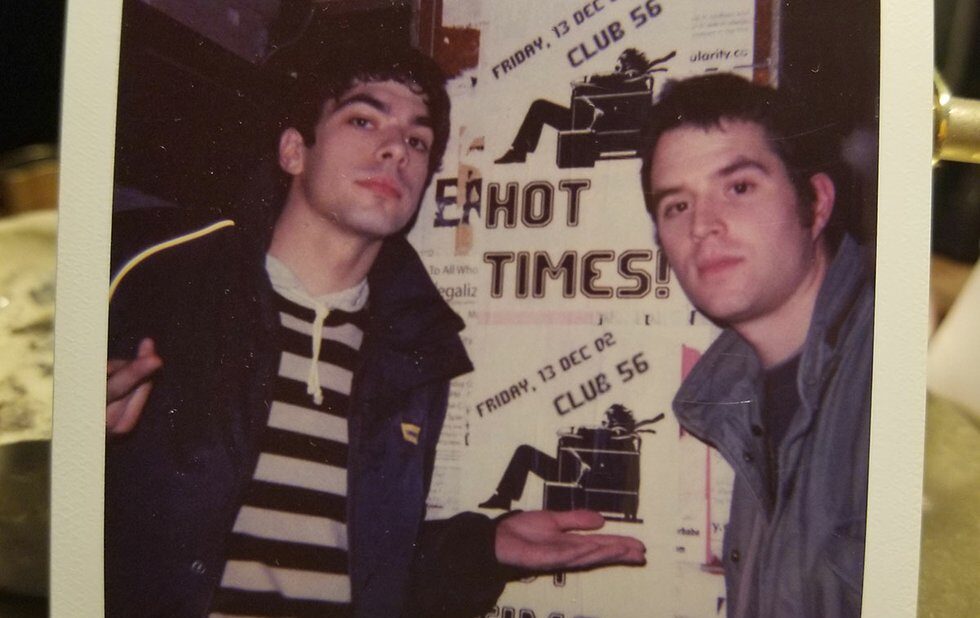 Mike Wallace and Rob Judges in front of a poster for their Hot Times party in the early 00s.

With full-on 90s nostalgia flooding our misbegotten time in history, it’s only right that Toronto’s early-oughts get their shine, too. It’s the trends of that era that have helped define where dance parties and live shows wound up today.

The warehouse parties, hole-in-the-wall DJ nights, all-night dances that are happening at loft gallery spaces and DIY Wiccan bonfires now all stem from the something-out-of-nothing mentality of our city’s party pioneers that created a vibrant scene in that era.

One of them, Mike Wallace, will be back to remind us those times this weekend, as he brings his Dreamshatterer project to Milk Glass on Dundas West.

Wallace and his childhood friend Rob Judges launched several dance parties over the years, from the 90s through the 00s, and his specialty was discovering new party spaces.

It started at nights like Skeme, the first of which took place at the Sapper’s Club on Spadina before moving to Kensington Market’s legendary Lion’s Club.

“[Sapper’s] was an old ex-military engineers’ mess hall that sold beer for two dollars,” says Wallace, who DJed with Judges at Skeme. From there, they threw nights at venues that ranged from Ethiopian restaurants to Hungarian nightclubs. Their parties were vibrant, often poorly lit and filled with a wealth of great music that spanned genres, only linked by quality.

Years later, Wallace would be one of the first to discover Kensington venue the Boat, then handing over booking duties to Trevor Coleman, paving the way for what Wallace called “one of the best venues of the 00s.” (It’s still in operation today.)

“I’ve always been interested in nightlife ever since I was kid and realized adults stay up late and do things they don’t, can’t or won’t do during the day – like dance.”

Skeme and Wallace’s later parties were inspired by raves – unusual venues, mostly word-of-mouth promotion, but with “the music we liked”: rock, rap, funk and soul.

Wallace credits the musical jumpiness to DJs at their high school dances in Scarborough, where kids from a wide range of backgrounds and tastes expected to be entertained.

Now a New York City resident and parent of two, Wallace remains in music via Dreamshatterer – “named after what New York does to your dreams” – his bare-bones, syncopated, emotionally raw project, with drums programmed by musician Jex Opolis, aka Jered Stuffco (a former NOW freelancer in the 00s).

Judges will be back, too, DJing a dance party that will follow Dreamshatterer’s set. Judges recently returned to Toronto after a few years in Japan, and immediately started the dance night Kinky Love, which happens at Super Wonder Gallery (584 College) on October 5.

Judges was inspired by the music he discovered in his travels, in a just-pre-digital way.

“When Mike and I started [00s party] Hot Times together, I had already lived in Japan for two years,” he recalls. “I had collected good music there that wasn’t available in Canada unless you were really digging. Stuff that has breaks in it, but just good, rare groove mostly. You’re getting releases that have different tracks on them before the U.S. release. And this is all before people were downloading music. I bought a lot of CDs and brought ’em home.”

The mention of CDs is important – they’re Judges’s format of choice. He proudly shows me his collection of thin, stylish Japanese CD sleeves, including about seven Bill Evans albums.

Perhaps it’s Judges’s time spent in Japan and Wallace’s years spent trying to make his band Saracen happen in London, England, that created the cool, casual but in-the-know vibe that permeated Hot Times and Wallace’s eclectic mixtape-like party Evil Genius. They hopped from venue to venue but peaked in the moist, claustrophobic and incredible confines of Club 56, a Kensington basement landmark run by a Hungarian named Leslye.

In my low-budget early-20s mind, Club 56 was the only place to go and dance – and I wasn’t the only one. Detailed fully in Denise Benson’s Then And Now: Toronto Nightlife History, the club hosted Will Munro and Jaime Sin’s legendary Peroxide parties, DMoney’s Fuckfaces and later on, Rob Gordon and Luca Lucarini’s Expensive Shit. Judges also recalls a dance party called Who Farted.

Fittingly, the Dreamshatterer show is being promoted in a pre-internet manner, with posters stapled to telephone polls and flyers handed out to strangers. It’s a way of celebrating the way it has been, and the way it will be if for some reason the internet is destroyed. Wallace thinks this tactile tactic is far from retro.

“I’ve been sending postcards [advertising the show] in the mail. Everybody still loves getting something in their mailbox that’s not a bill.”