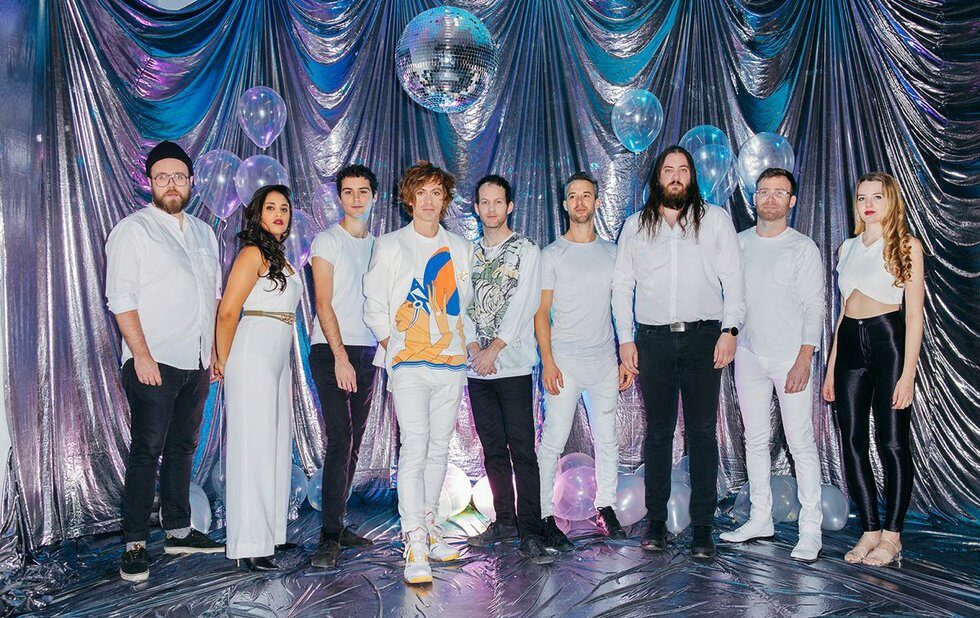 Midnight on New Year’s Eve is that one truly indispensable moment of the year, one you don’t want to waste.

There’s two ways to grapple with that existential party fact. For some people, it’s finding the perfect underground party at the perfect secret warehouse space with DJs spinning perfect sub-genres so new they sound made up. For others, it’s a time to throw cool out the window and focus on tried and true, drop-your-defenses anthems, the kind you belt out alongside a crowd of strangers with clenched fists, united in song and tiny glasses of off-brand champagne.

If you fall into the latter category, you might want to check out Dwayne Gretzky and the new event they’re headlining, the Infinity Ball. The Toronto party band is basically musical normcore, or the live band version of the vinyl revival. With rock and roll no longer the dominant genre, the many members of Dwayne Gretzky dig into nostalgia as collectivism, uniting fans too young to have heard Manfred Mann and Fleetwood Mac live in their heyday by playing their hits with unironic energy and fidelity.

Who knew dad rock covers would be such a lucrative niche? After multiple years at the Danforth Music Hall, Dwayne Gretzky are moving to the cavernous Enercare Centre (which they’ve renamed the Infinite Palace) and they plan to make it count. The venue will be filled with interactive art and trendy food, but the main attraction is the music – not even the band necessarily (which includes members of July Talk, Born Ruffians, Sweet Thing, Arkells and more), but the songs – “the greatest songs of all time,” as they put it.

So what are they? We got Dwaynsters Nick Rose and Tyler Kyte to make us a party playlist of 100-per cent can’t-miss New Year’s tunes. Don’t worry if they’re predictable they work. Expect to hear some of them at the Infinity Ball.

“This is a loose collection of some of our fave tunes suitable for a big NYE party,” they say. “We treat all of our shows like we’re curating a perfect playlist for the occasion – the only difference being that we’re playing them all live, and giving it all that we’ve got. Given the grandiosity of the moment and expectations on New Years Eve, this one really speaks to the band’s desire to go big or go home heading into 2018!”

Early in the night, if people are standing still, this song never fails to get everyone loosened up and out of their shell.

Paul Simon: You Can Call Me Al

Tom Petty: I Won’t Back Down

After a challenging year, the chorus to this classic anthem makes for a pretty good resolution going into 2018.

Take That: Back For Good

This song reminds me of the British Office Christmas Special and makes me cry every time. It’s never too late to change!

The anticipation is palpable! Patience, patience!

The Tragically Hip: Ahead By A Century

NYE is also a time to be reflective and celebrate the work of those we lost this past year. And no one had a bigger impact on us than the incomparable Gord Downie.

Whitney Houston: I Wanna Dance With Somebody

Maybe the most joyous, catchiest pop song ever recorded. How can you not dance like a maniac?

Mariah Carey: Always Be My Baby

The perfect soundtrack to a midnight make-out session.

A late-night call for one last moment of pure bliss. The build from the breakdown through to the outro is sooooo fun.

Roll credits! Now everyone go home and try not to puke in the cab!