The concrete monoliths are not an obvious choice for civic celebration, but to the artists playing the Pillars Picnic their demolition represents how we treat our concrete heritage 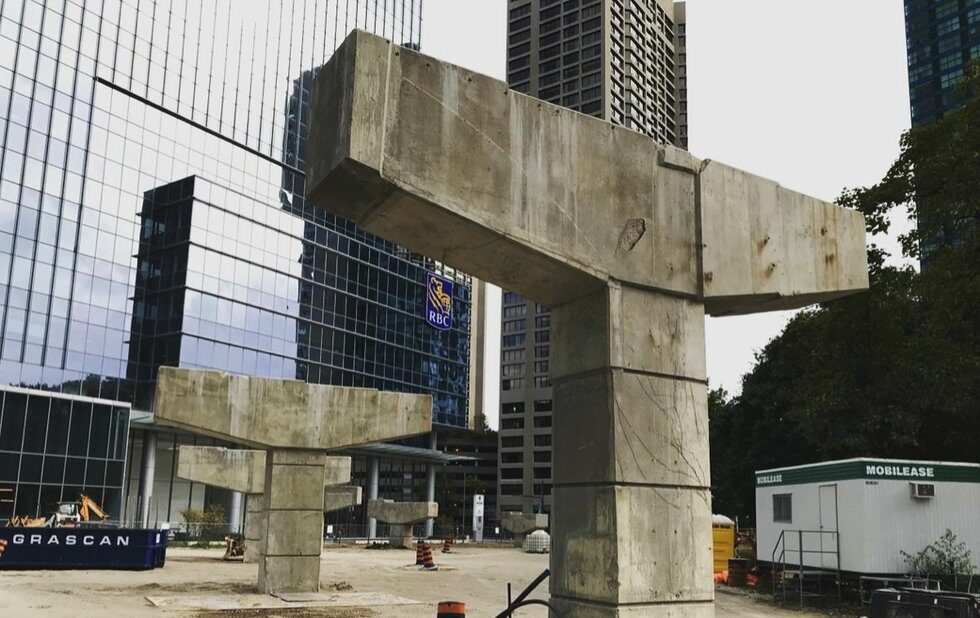 “The pillars are Toronto’s best accidental public art project,” says Daniel Rotsztain. “Toronto has a habit of forgetting its history as it builds anew.”

ZOË, NOT THE WIND, NOT THE FLAG, ISLA CRAIG and IVY MAIRI as part of THE PILLARS PICNIC at the northeast corner of Queens Quay and York, Sunday (June 2), 5 pm. Free. facebook.com.

Daniel Rotsztain is very passionate about a peculiar relic of Toronto’s waterfront: the weathered support pillars leftover from the Gardiner ramp at York and Queens Quay.

Rotsztain, a writer and artist who goes by the moniker the Urban Geographer, believes the pillars are so important and beautiful that he’s organized an event, The Pillars Picnic, to celebrate them before they’re torn down next year to make way for a new park.

“The pillars are Toronto’s best accidental public art project,” says Rotsztain over the phone. “Heritage is often [viewed] as the deep past, but it’s the way we inhabit space and respect what came before us.”

Last year, he launched a petition to incorporate the spiral of concrete monoliths into the new park, but after an international design competition, Montreal firm Claude Cormier Associés’ winning plan does not include them. Construction begins in spring 2020.

“I recognize the effort to save them isn’t going to work, so let’s enjoy them while they’re here,” says Rotsztain. “Let’s relish in the temporary urban landscape and have a moment to appreciate this beautiful artifact before it leaves.”

And so the Pillars Picnic will be part wake and part concert, curated by Toronto’s Zoë Alexis-Abrams, who will be performing with her experimental synth pop project, Zoë. Rounding out the show are percussive duo Not the Wind, Not the Flag, singer/songwriter Isla Craig and the moody electronic vibes of Ivy Mairi with Matthew Bailey.

The event will also include a performance by dancer Lauren Runions, while artist Sara Torrie is creating a site-specific installation using hand-made, hand-dyed rope. Designer Rob Shostak will bring his Yellow Bents, a series of costumes of the Gardiner pillars commissioned by the Bentway.

The pillars hold special significance for Toronto-raised Alexis-Abrams, who used to fantasize about transforming them into a play structure or a garden terrace.

“I spent a lot of my formative years around the waterfront, in places that attracted very little commercial interest, but now developers edge me out of that experience. So it’s important for me to take up space [there],” says Alexis-Abrams.

Rotsztain recognizes that the pillars might seem like a trivial part of the urban fabric, but they also represent how the city views its past.

“Toronto has a habit of forgetting its history as it builds anew,” he says. “This was an opportunity to do some urban design that recognizes the history of a space and not a tabula rasa approach that erases what was there before. Toronto is a concrete city. Our heritage is concrete.”

For now, the Sunday picnic, which is BYOB and BYOF (bring your own blanket and food), is the only event Rotsztain has planned in the space before the pillars are gone, but he hopes there can be more on the site and in other offbeat, underutilized public spaces.

“I have a history of hosting concerts and lectures in unexpected places – [like] at Downtown Centreville in the winter – and I’ll continue to seek out places like this as venues. Whether it’s the pillars or not.”