Inside Girls Rock Camp For Grown-ups 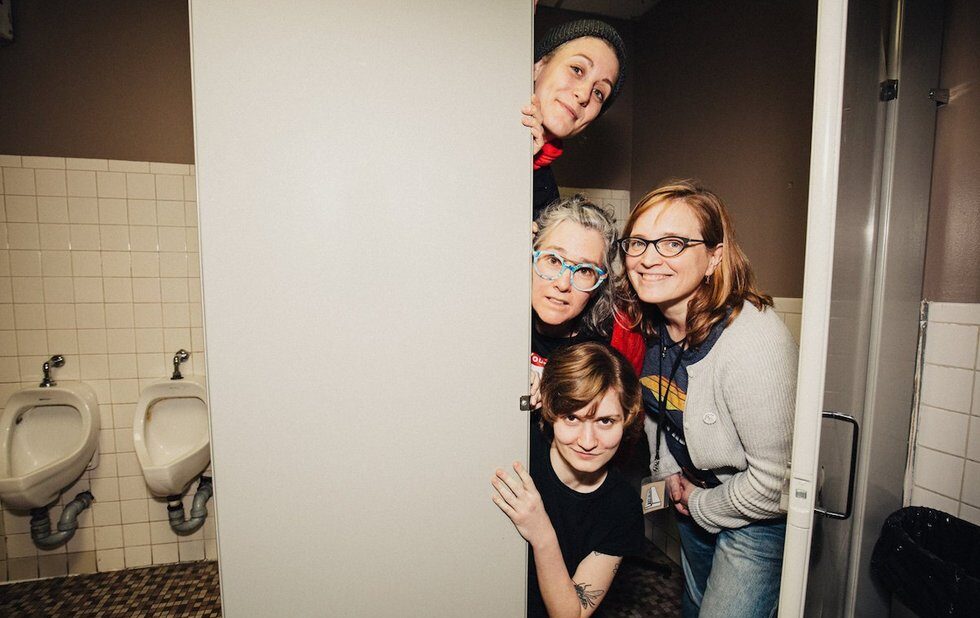 It’s exactly the way I always imagined my first brush with rock stardom.

My bandmates – a keyboardist, a guitarist, a bassist – are laying down a smooth, soulful rhythm.

I look to my left: an impressive wall of microphones, patch cords and other sound gear. I look to my right: a couple of toilets, a sink, a shower ringed in a soft yellow curtain.

So, okay, maybe I didn’t imagine my musical debut would take place in the upstairs bathroom of the Tranzac. But there is something extremely punk rock about the whole situation. My bandmates and I are embracing it. We’ve dubbed ourselves the Ladies’ Room in honour of our surroundings.

It’s all part of the wild carnival ride that is Rock Camp for Grown-Ups, a mid-February weekend retreat organized by Girls Rock Camp Toronto for adult musicians-to-be.

On Friday morning, several dozen very talented and very different women assembled at the Tranzac to forge their first bands, play their first notes and write their first songs. On Sunday night, these same folks hit the stage for a sold-out showcase at the Burdock.

Since 2010, GRCT has enlisted a crew of local female-identified musicians to empower and educate girls eight to 16, creating new generations of Siouxsies, Shonen Knifes and Sleater-Kinneys.

Local favourites Pins & Needles and HEX got their start at GRCT, and the program has now produced four full-length compilation albums of campers’ best and brightest efforts.

No wonder, then, that the inaugural Rock Camp for Grown-Ups has been met with such enthusiasm. In a misogynist music industry, older women are often hit first and hardest, denied opportunities for advancement in a field that often privileges youth, beauty and sex appeal over talent and commitment.

“I have been lobbying for an adult version for years,” said camper Jasjit Sangha, whose daughter, Simryn, plays rhythm guitar in HEX. “I love the community spirit at Girls Rock Camp and the freedom girls have to just be themselves and resist gender stereotypes.”

Community spirit, freedom to be yourself, resistance of gender stereotypes – all were on display throughout the weekend. GRCT has a long-standing policy of embracing and including people from diverse walks of life, and it was, frankly, astonishing to witness it transform the lives of campers.

During Friday morning’s icebreakers, women as young as 19 talked Bikini Kill deep cuts with women as old as 66. Women of colour banded together to plot out riot grrrl takedowns of Donald Trump. Trans women recruited cis women for instrumental backing in spirited performances of Against Me!’s greatest hits.

“I’ve dreamed about being in a band,” said camper Bridget Liang. “But as a transfeminine person, my relationship with women-only space is complex. Historically – and presently, in some spaces – trans women are not welcome. Fortunately, a friend told me that Rock Camp was explicitly inclusive of trans women.”

At Rock Camp for Grown-Ups, the oft-repeated platitude “be yourself” became a genuinely radical call to arms. There was no judgment in the air, no exclusion, no shame. Women who’d been constantly and consistently excluded from music-making all their lives finally had a chance to make their voices – and guitar squalls – heard.

And if the rock-and-roll bliss emanating from the ladies’ room is any indication, we don’t plan to quiet down anytime soon.