Former staffers reflect on legendary in-store performances, gloriously lax returns policies and why the flagship was the Nirvana of record stores 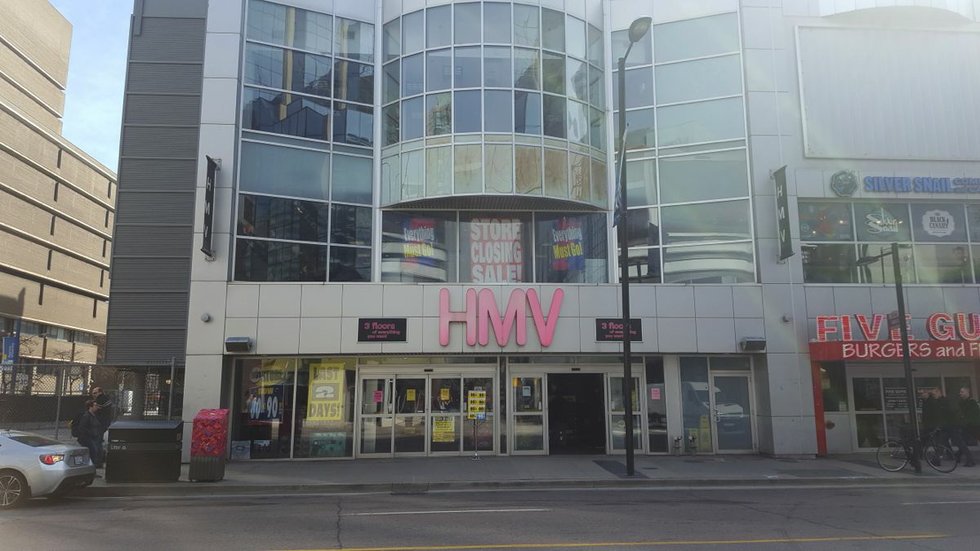 Back in the late 80s, the Yonge Street corridor north of Dundas was a miracle of urban planning – if you were a 16-year-old. Forget the Eaton Centre across the street – Yonge was a virtual mall catering to a bored adolescent’s every desire. There was a Harvey’s, video arcades, head shops, strip clubs and the fake ID peddlers you needed to get into them. To top it off, the area was also home to the biggest and busiest record stores in the city: Sam’s, A&A, Sunrise. These weren’t mere shops – they were cathedrals, albeit with gaudy, oversized neon signage instead of stained glass windows.

But on a street full of record-store behemoths, one loomed largest of all. When HMV opened at 333 Yonge in 1991, its competitors immediately felt like holdovers from a different era. Like the CDs it sold, HMV felt new, shiny and futuristic – and a little bloated. With its multiple levels, escalators and specialty sections that took up entire floors, it turned music shopping into a department-store experience. It had its own roster of in-house DJ personalities and videographers producing closed-circuit vignettes, like a mini MuchMusic. And it seemed particularly attuned to the changing nature of pop music in the 90s, devoting vast amounts of real estate to alternative rock and hip-hop.

The HMV on Yonge was essentially the Nirvana of record stores: massive and corporately connected, for sure, but infused with anything-goes indie attitude thanks to a tight-knit, familial staff of music aficionados. That’s why news of its impending closure at the end of April – a casualty of HMV Canada’s recent bankruptcy filing – unleashes the #feels a lot more than your average big-box shutdown.

“HMV was literally High Fidelity, but set in a corporate environment,” says Ty Harper, the former Flow 93.5 host who worked as a buyer for the store’s subterranean hip-hop outpost, The Bassment, from 1996 to 2005. “I can’t act as if I didn’t get all Jack Black on customers sometimes when they wanted to buy a Coolio album. I’d be like, ‘What the fuck are you doing? I can’t sell that to you! Take Stevie Wonder!’

“We had such an intimate relationship with the people coming in there, and the store gave us a lot of agency. I mean, at that time, where else did you see a department where Black and brown people were in managerial positions?”

In its 90s heyday, HMV was a must-do destination for pop stars on the promo circuit Harper speaks with audible awe about the A-listers who passed through its doors, including Puff Daddy, Mariah Carey and D’Angelo. The store’s publicity-stunt events typified the extravagance of the peak-CD era. Like the free 1997 Green Day show where a throng of thousands formed a human sausage in the store’s narrow back alley. Or the outdoor Red Hot Chili Peppers concert that shut down the intersection of Yonge and Edward in July 99. Or that time Korn rolled up for a signing session in a tank.

But as one former employee tells it, when it came to sheer in-store pandemonium, nothing topped a 1996 appearance by Foxy Brown.

“It was crazy, because the people who attended didn’t give a fuck,” says David Binette, a buyer for the store’s alternative section from 1993 to 1998 who’s better known to mid-2000s indie dance night patrons as DJ Shit la Merde. “People were taking armfuls of CDs and putting them on the ground to stand on them to see better. And after that was done, the floor was just destroyed – the staff were mopping up and mopping up and throwing out trash bags full of broken CDs.”

But HMV didn’t just roll out the red carpet for big names – it made unsigned, DIY bands feel like stars, too. Back in the early 90s, local indie music was given a prime ground-floor section just inside the front doors, right alongside the biggest pop sellers. And Toronto bands were as much a part of the in-store performance schedule as the big international guns.

Brendan Canning was one of the beneficiaries of that largesse. When NOW contacted the Broken Social Scene bassist for this story, he was en route to New York to appear on The Late Show With Stephen Colbert. But the Yonge Street HMV was the site of a different sort of career milestone when his old grunge trio, hHead, topped the store’s indie chart with their self-released 1992 debut, Fireman.

“We sold 15,000 CDs and cassettes of that record in total, and I bet we sold half of those at that store,” he says. “And when we did in-stores there, like, 500 fucking people would show up! It was the glory days. You thought it would never end.”

Alas, HMV’s free spirit proved a harbinger of its decline. For years, the store had an incredibly lax, no-questions-asked returns policy that, once CD-reproduction technology proliferated, became informally known as the “Buy, Burn, Return” plan. And according to Binette, some crafty “customers” didn’t even bother taking the discs home.

“This one dude – who eventually got caught – was grabbing $200 box sets off the wall on the second floor then he’d walk downstairs to the cash register and say, ‘Yeah, I got this as a gift, I don’t want it’ – and he’d get a $200 cash ‘refund.’”

But such abuses were a drop in the bucket compared to the havoc wrought by file-sharing, and 333 Yonge gradually became a physical representation of the music industry’s decline in the digital age. By the mid-2000s, as floor space for CDs shrank, HMV was in effect a glorified DVD store in 2012, its southern wing was closed and turned into a Five Guys Burgers and Fries. All the while, its once-lustrous silver space-age exterior turned a dank shade of brown.

Ironically, the last big record store left standing at Yonge and Dundas is the last one you would’ve bet on for long-term survival back in 1991. Sunrise Records was never as huge or flashy as its neighbours, and the scrappy Canadian chain seemed destined to join the dead pool a few years back. But since president Doug Putman took over its five remaining stores in 2014, Sunrise has enjoyed steady expansion – and its location list will explode when it takes over 70 shuttered HMV stores across Canada this spring.

For the moment, those properties do not include 333 Yonge. But even if it ultimately remains a record store, for former staffers like Binette the HMV of the 90s was a unique, glorious collision of shifting cultural tides, music-industry excess and corporate lenience that will never be experienced again.

“You know that movie Empire Records?” Binette asks, referring to the 1995 Liv Tyler comedy set in an indie record shop. “I actually never watched it – because I was living it.”