Even as details about her identity have emerged, the up-and-coming R&B singer and Daniel Caesar collaborator is keeping the focus solely on her music 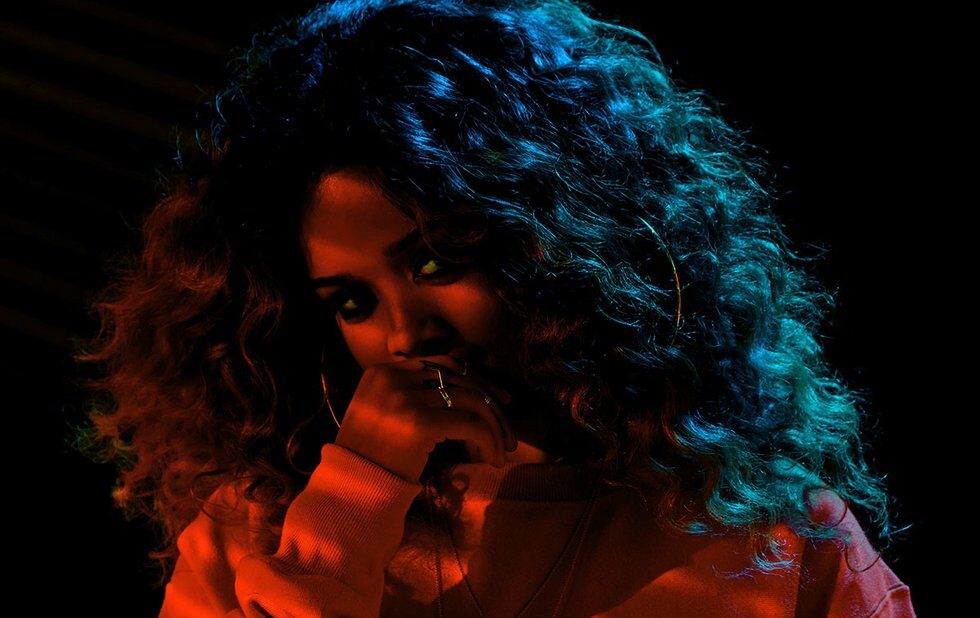 When H.E.R. performs live, it’s in a cloud of fog and blue light that obscures her features. And the cover of her first EP, Volume 1, features the silhouette of a woman against a gradient blue background. Even in music videos, she never directly faces the camera.

H.E.R. stands for Having Everything Revealed. So why the secrecy? The R&B musician says the name was meant to be ironic, since she doesn’t actually reveal anything about her personal identity – even if, by this point, it’s easy enough to figure out who she is.

“I used to tell people when I was 15 or 16 that I’d never be that girl who goes through this, gets her heart broken, falls for this guy, but I ended up being her,” she says over the phone a few days after the release of her new EP, H.E.R. Volume 2, The B Sides (RCA).

In the time since her teen years, she’s learned a few things.

“You can’t avoid heartbreak, you can’t avoid a lot of things. You have to go through them in order to become the person you’re going to be. So, being H.E.R. is just the evolution of being a woman.”

Her music floats from bass-heavy, trap-influenced sounds to delicate and ethereal moody vibes all brought together by lyrics that explore first love, budding sexuality and heartbreak.

Fans of Toronto’s resident wunderkind Daniel Caesar may have been introduced to H.E.R. by their duet, Best Part, on his debut album, Freudian. The track also appears on H.E.R.’s latest EP. It came together the first night they met, when Caesar asked to meet her while she was working in the studio after midnight. They both had their guitars, and what started as a conversation became a recording session.

“We didn’t plan on writing a song that night but we ended up vibing and talking for hours and hours,” she says. “We left the studio at, like, 5 am and had Best Part. There were no expectations whatsoever and I think that’s why we got such a great song.”

She’s been likened to two other local acts, dvsn and the Weeknd, artists who first released music before anyone knew what they looked like (and who she says she listens to regularly).

The difference between her and them is that their anonymity ended once they were signed to major labels. She’s already signed to RCA, but is still not yet attaching her identity to the music.

It seems that anonymity sells – her Spotify streams surpass 1.6 million per month and she’s been co-signed by Rihanna, Alicia Keys and Bryson Tiller, who she just opened for on a recent North American tour.

Opening for Tiller, she was surprised to find how many people were already familiar with her music.

“The best part is the satisfaction and feeling you get when a bunch of people are singing all the words to your songs. Especially being an opener,” she recalls.

She’s excited to come back to Toronto as a headliner. “In a lot of cities, people sometimes are too cool – they just watch as opposed to really being into it. I feel like I connected with the people out there. I love Toronto.”

It’s been speculated and “uncovered” that H.E.R is a re-branding of California music prodigy Gabi Wilson, but ultimately it doesn’t matter. She’s a master of crafting songs about the range of ways we deal with love and loss, from vulnerability to badassery to the incertitude in between.

H.E.R. represents any woman who sees herself in these songs. H.E.R. is you, your best friend, the girl next door. The singer/songwriter says eventually her face and identity will be public knowledge, but it was important for her that the focus be solely on her music while her career is blossoming.

“You don’t need to know who is sending the message in order to receive it.”