How the Horseshoe became punk

In this excerpt from David McPherson's new book, The Legendary Horseshoe Tavern: A Complete History, learn how the venue spread beyond its country roots in the mid-to-late 70s 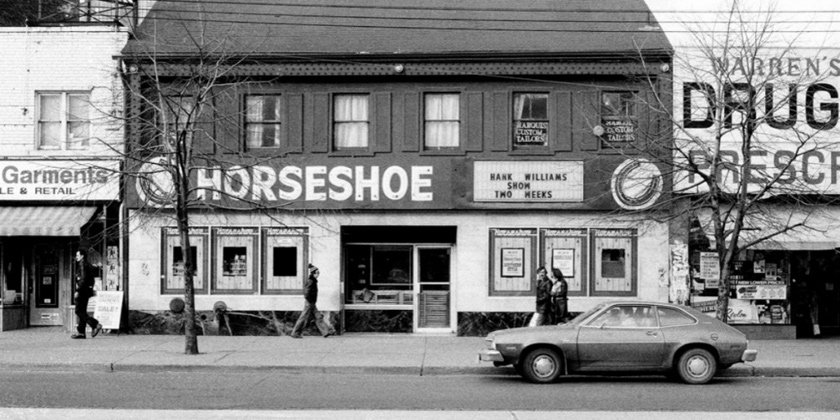 The Horseshoe is about to celebrate its 70th anniversary with a packed lineup of special shows until the end of the year. One of those events will be an October 11 book launch of David McPherson’s The Legendary Horseshoe Tavern: A Complete History, out September 23 on Dundurn Press. It details the Queen West bar’s rich history as it transformed from one of the country’s top country bars into a punk palace, CanRock haven and rootsy-but-genre-bending venue it is today.

In this chapter, we learn how the venue, which made its name as a sort of Grand Ole Opry of the north, and then for Stompin’ Tom Connors’ legendary 25-night residency, became a punk and new wave paradise in the 70s. It started with two men named Gary.

The Garys Shake Things Up

To me, punk is about being an individual and going against the grain and standing up and saying, “This is who I am.”

In the mid- to late 1970s the Horseshoe was still widely known as a country bar, but since the retirement of original owner Jack Starr in 1976 the venue had been slowly losing its identity. Just like Toronto the Good at the time, the Horseshoe badly needed a reinvention, a cultural revolution to inject life into the well-weathered walls.

Cowboys and cowgirls who looked like they had just rolled in along with the tumbleweeds from an Albertan ranch were still the ’Shoe’s main patrons. But impresarios Gary Topp and Gary Cormier, known as “The Garys,” quickly changed that, ushering in a new musical era. The cowpokes were replaced by misfits, the cowgirls by punk rock girls dressed in skinny jeans, leather jackets, and black or white T-shirts spray-painted with the names of their favourite bands.

1978 was a watershed year in the Horseshoe’s history. Not only did it change ownership, with The Garys taking control of bookings, but it also became a club with a higher purpose. As The Garys’ inaugural concert poster proclaimed, “The Horseshoe: The First Concert Club in Toronto.” While it rattled the regulars, who lamented the end of a 25-year tradition of country and western music, for those in the know, those eight months from mid-March to early December when The Garys were given carte blanche to book whomever they wanted, every night was a magical, memorable live music experience. The Garys put up their own posters — both east and west and north and south of Queen and Spadina. They would arrive at the bar at five o’clock in the afternoon and wouldn’t leave until three the next morning. The Garys were going against the grain with a shared raison d’être. 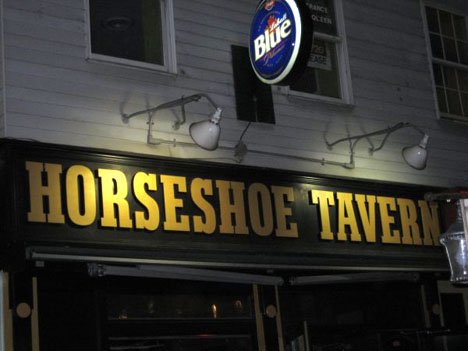 Prior to taking over bookings at the Horseshoe, Gary Topp and Gary Cormier ran the New Yorker Theatre on Yonge Street, 50 yards south of where the underground indie cinema Cinecity once stood. At this popular theatre, the pair promoted shows, including the Ramones’ first Toronto visit, curated movies like the Beatles’ Magical Mystery Tour and Yellow Submarine, and hosted myriad art-themed nights. Topp had previously owned another movie house: the Original 99 Cent Roxy.

Many patrons of these establishments ended up forming punk bands that later played the Horseshoe. Gary Cormier had also managed bands like Rough Trade and Joe Hall and the Continental Drift, both of which had previously played the Horseshoe, which is how he got to know the manager at the time, Peter Graham.

When Graham approached The Garys to take the venerable old tavern in a new direction, the bar was due for a change. Sales were slipping. The country fans were not as loyal to the old lady as they once had been.

The grande dame of Queen needed some fresh blood and bold ideas, and that’s exactly what The Garys brought to the business. The pair had built up a loyal following at the New Yorker, but with rents climbing, the businessmen couldn’t keep pace with the rising costs. It’s no surprise they jumped at the chance to take their curatorial model that had won over a core audience at the New Yorker down to Queen West.

Working for 18 hours straight, the first thing they did was move the stage from the middle of the west wall in the backroom, near where the current back bar is, to the far end of the room on the north wall. Then they built up the stage to three feet, making it what they considered a proper height, and enclosed it with three walls. They brought in a new PA and lighting system, and installed a light and sound system as well as film projectors and overhead screens, video machines and other gadgets.

As Cormier told Gary Toushek of the Globe and Mail, their intent was never to alienate the regulars:

The Horseshoe is a genuine Queen Street bar made authentic by its clientele, the street people, the country and western fans. We’re not out to destroy that, we’re adding to it, changing it for what we hope will add enjoyment of the audience. We want to make the Horseshoe more than just a bar. We want to make it a cultural melting pot. New York has the Fillmore and CBGB — Toronto never really came close to the concept that these places offer.

The Garys also hung a horseshoe, embroidered by Cormier’s wife, Martha, on the black backdrop of the stage. It would become the new insignia for the tavern. Like the horseshoe in their handbills, it was hung upside down — if the tines of a horseshoe are pointing down, it’s supposed to be a bad sign, meaning its luck has run out. The backstory is that when these promoters first started booking concerts at the New Yorker, they gave out T-shirts that featured the New York skyline with a man holding a horseshoe as souvenirs to the bands who played there. Dee Dee Ramone even wore one of these shirts on the cover of their second album, Leave Home. This symbol was an omen, for sure, that The Garys’ run would not last forever. 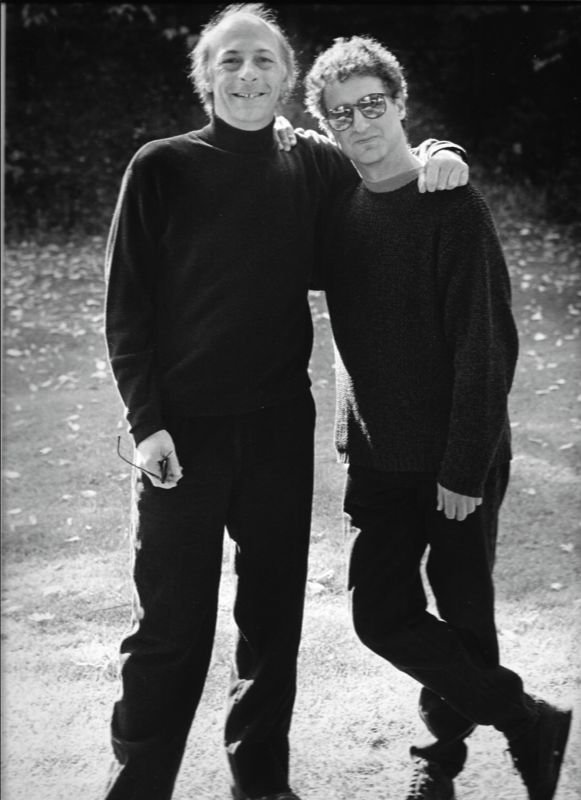 The Garys (Gary Cormier and Gary Topp) booked the Horseshoe for a memorable eight months in 1978.

Still, while it lasted, every night was an experience. You didn’t know what was going to happen.

“You would turn your jeans inside out and sew them straight,” recalls Lin Duperron, a regular patron during The Garys’ tenure at the ’Shoe. “We bought leather jackets at surplus stores or real motorcycle jackets … we were budding musicians, artists, and writers many of us didn’t have a steady income, so it was a way for us to get creative.”

While it’s now remembered most as the Horseshoe’s punk rock era – thanks largely to the documentary The Last Pogo, which chronicled the infamous last night of mayhem that was The Garys’ swan song – during those 240 days, the promoters brought in an eclectic mix of the creative arts: everything from avant-garde jazz to reggae, singer/songwriters to blues and even comedy with the likes of Darryl Rhoades and the Mahavishnu Orchestra. As the ’Shoe’s new chief curators, the duo simply booked the bands they liked – either local or imported.

Here’s just a sampling of the performers who graced the venue’s marquee that year: the Police, Sun Ra, Pere Ubu, Cecil Taylor, Etta James, Jesse Winchester, the Viletones, Suicide, the Stranglers, and the I Threes.

According to Topp, two of his most memorable shows were the Stranglers, for which around 1,000 people (200 over capacity) were shoehorned into the place, and Pere Ubu, the first imported band the pair ever booked.

“We were very eclectic in our tastes and bringing in stuff that was in our record collections,” Cormier says. “We booked people we thought were great that deserved to be shown in there.”

The Last Pogo co-producer and director Colin Brunton had worked with Topp since his Roxy days and was offered a job at the Horseshoe. The job description was vague:

“Do you want me to bus tables?”

“No, they’ve got people for that.”

“Do you want me to take tickets?”

Brunton basically got paid to hang out for a few months and then left to start driving a cab and figuring out how to get into the film business. He designed the handbills, basing them on a template that featured a man (rumoured to be Topp when he was in high school) holding a horseshoe decorated with flowers. He’d alter the face to suit whichever bands were prominent on the flyer.

The handbills were made with Letraset dry transfers, rubber cement and X-Acto blades. The transfers would be pressed onto the page and then distressed with the knife. If Brunton wanted the colours reversed (that is, black on white rather than white on black), he’d ride his bike up to Midtown Reproductions at Davenport and Yonge, pay 10 bucks, then wait a day to get it back. Brunton had to switch printing houses at least once because of complaints by the owners that he used too much black ink. Once a handbill was completed, hundreds of copies were made and then stapled to telephone poles and construction hoardings downtown, careful not to cover up any other current handbills.

Before the gentrification of Queen West, the blocks around Spadina were an industrial wasteland of second-hand book and furniture stores. Brunton takes us back to what the Horseshoe neighbourhood looked like then: “Queen Street West was a ghost town of industrial kitchen supply stores, boarded-up storefronts, and used bookstores, edged onto the then still largely Jewish Spadina Avenue, with its delis, milliners and tailors.”

“There was gravel between the streetcar tracks. On most days, you were lucky to see a handful of people roaming the streets at the corner of Queen and Spadina, where the Horseshoe sat.”

Also, Toronto Transit Commission workers went on strike in 1978 for eight days, adding to the ghostly atmosphere. Hitchhiking was common. Cabs, which offered cheap fares, did brisk business along this strip, taking the barflies from club to club.

The Beverley Tavern, the local watering hole for Ontario College of Art students, was just four blocks east and offered an open stage to the new wave bands coming largely from the college. These bands were not interested in playing Rolling Stones covers at some dive bar or restaurant.

Peter Pan restaurant, in business since 1927, was across the street and a block west of the Beverley, and had been given a major do-over by Sandy Stagg two years earlier, in 1976. It was another artist hangout, and many musicians worked there. The seeds of the new Queen West scene were planted.

“What Gary [Topp] and I tried to do was take you somewhere you hadn’t been before: musically, physically and spiritually,” recalls Cormier. “We were not about serving up the same old thing. We booked a lot of bands that couldn’t get the time of day from anywhere else in the city.”

Checking out the Horseshoe for the first time, Topp and Cormier were confronted by rounders sitting at the bar slugging back cheap draft beer. A few of these regular barflies asked them bluntly, “You’re not going to kick us out, are you?” Cormier assured them they would always be welcome. Even some of the die-hard country fans from the Horseshoe’s previous regime, who were surprised by the new and unfamiliar sounds when The Garys took over, were eventually won over by the energy and enthusiasm of the music the promoters brought in. They, too, were ready for a change.