How former pro skateboarder Jesse Landen ended up in Jiants

The Toronto indie rock band is the result of skate videos, injuries and lust for life. Watch their new video Plan exclusively here 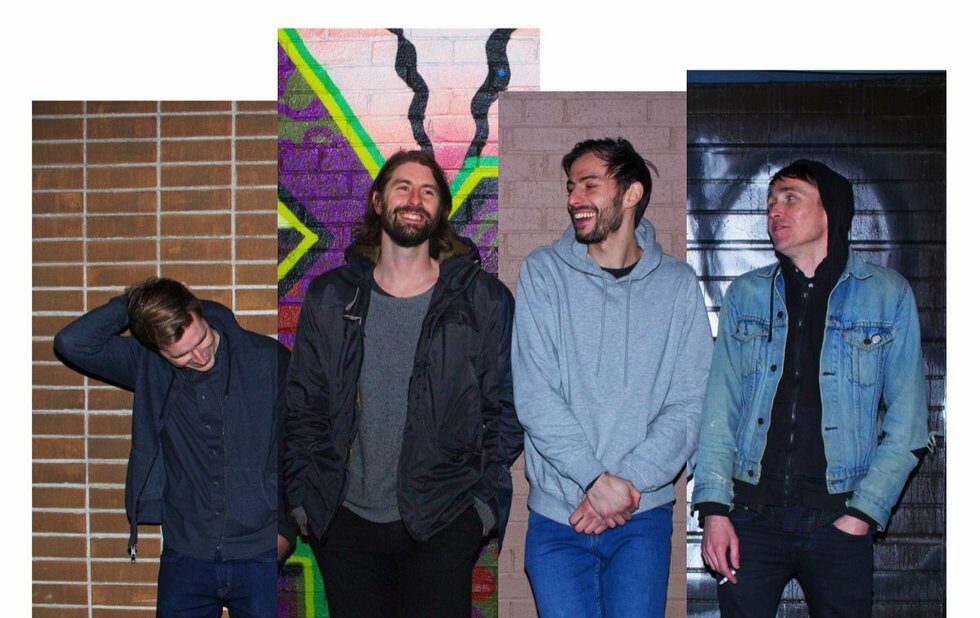 Many athletes have a breaking point – a moment when they realize they have to abandon their sport for their own good. For Jesse Landen of local indie rock band Jiants, it was yet another broken bone.

The 6-foot-4 former pro skateboarder from Owen Sound has had ankle surgery six times. Seated on a patio on Dundas West, he pulls up his jeans to show the scars. Later, he points to his elbow, knotted over with scar tissue, which he shattered in 2011.

The accidents left him immobile, and he used the recovery time to focus on music. “I just ended up being a songwriter,” he grins.

Jiants’ song Plan, which is premiering here, comes from their sophomore record, Odd Trouble, which dropped June 1 and showcases their sun-dappled slacker pop sound. Directed by fellow skateboarder Aidan Johnston, the video follows a tour guide through the Toronto Islands. Like most of Landen’s work, it’s a DIY operation, mostly out of necessity. He, Johnston, and a tiny crew biked around the island, towing a trailer with a camera on it.

“Making a low-budget video is just idea-based,” Landen explains. “What can you show that doesn’t cost money?”

The simple, collaborative video showcases the skills Johnston and Landen picked up in video and music, primarily as a by-product of their interest in skateboarding and skate videos.

“There’s this group of [former skaters] kicking around who maybe didn’t go to school for something that they’re really good at,” says Landen. “We all have these skills, and we learned a lot of them from skating.”

Jiants’ swaying, easy-going guitars and layered vocals feel pretty relaxed, but Landen describes the project as “pushing forward against all self-doubt.” In a way, it’s an extension of his former career.

“What I was the most into with skateboarding was almost scaring myself,” he says.

Landen left Owen Sound immediately after high school to pursue skateboarding. He wound up crashing on couches in Southern California, competing and attracting major sponsors,  until injuries brought him home.

“After I got done with [skateboarding], I felt shell-shocked,” he grimaces. “Everything seemed so boring and easy. I think in a weird way I’ve dulled my senses from skateboarding.”

That thrill-seeking can easily turn self-destructive. “I’ve seen a million skateboarders who turn to alcohol abuse and stuff like that.”

Landen says he still loves skateboarding, but certain aspects of the culture no longer resonate. “With skateboarding, you just stay in your own dude-bubble,” he chuckles. “I definitely needed to get out of that.”

Now 34, he’s basically started over. Between Jiants, which started in 2016, a solo electronic project called Balmy Beach, and a film production house he runs with his brother, Landen is making sure he doesn’t waste any time.

“I try to use every minute now,” he says. “I don’t know when that changed, but I think I saw a lot of lost time. Maybe everybody feels that way in their 20s. You feel like you’ve got all the time in the world, and then you don’t.”