Interview: Leikeli47 takes us behind the mask

One of hip-hop's most fascinating rising stars, the balaclava-clad rapper talks vulnerability, confidence and the Black experience 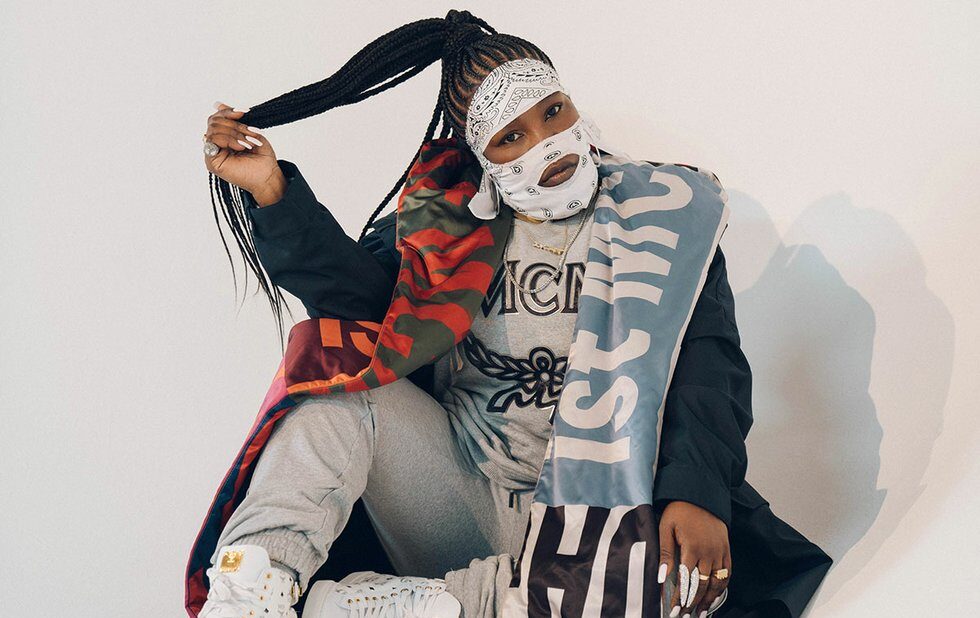 Between her bars, baby hairs and balaclava, Leikeli47 is shaping up to be one of hip-hop’s most fascinating rising stars.

Her surrealist visuals and ultra-confident delivery bring to mind Missy Elliott. At the same time, the Brooklyn musician’s style and aesthetic are so wholly her own, it’s hard to fit her into hip-hop’s current landscape.

You might have heard her bouncy bops as scene-setting background tracks on HBO’s Insecure or Freeform’s Grown-Ish. In the song Money, featured in the latter, Leikeli dips into the braggadocious swagger that is often reserved for her male colleagues, flowing over a bassy, minimalist beat: “All my life, I had to grind and hustle / I had to work like Kobe just to shine like Russell.”

Months after releasing her second full-length album, Acrylic, Leikeli47’s grinding is more fruitful than ever. She recently turned heads in an NPR Tiny Desk concert, backed by a jazzy four-piece band, dropped a new self-directed video for No Reload and is about to take off on a hotly anticipated tour that brings her to Velvet Underground.

But despite her self-assurance and revelatory lyrics, she chooses to hide her face and identity. During our phone chat, the self-proclaimed introvert decoded her decision to remain masked.

Vulnerability plays a role in your music. Is that why you wear the balaclava, or is about a desire to focus on the music?

Focus on the music. I’m always going to be vulnerable in my music. When you listen and you just focus on my music, you are going to hear every emotion squeezed out of me. And hopefully, with me doing that, I’m squeezing every emotion out of you.

I’ve always been this quirky kid who has wanted to please people artistically and have my voice be heard through music. So I’m leading with that.

Acrylic is a very personal album. On Top Down you get real about vulnerability in relationships, and on In My Eyes, you reflect on your journey from being a “welfare baby” to where you are now. Is opening up ever nerve-wracking?

What’s your relationship to fame?

I want to create moments of people hearing my songs for the first time and remembering where they were when they first heard it and when they first saw the video. That’s it for me.

The fame thing is a hell of a drug. It’s a drug I’ve never been interested in trying. But it is what it is. The art that we do, the things that we display, they put us on a platform. It’s what you do when you get there. The fame will come and I’m not going to say that I don’t welcome it. I’m open to everything that comes with what I do. But I’m always going to maintain my integrity.

There are plenty of salutes to Black cultural cornerstones in your music. How integral is the Black experience to your work?

It’s the epicentre. It’s my headquarters. I have to speak from that place because that’s where I’m from. I’m a Black girl from a Black neighbourhood. And I’ve only known my Black culture and my Black way of living all my life. I love and respect all cultures and I’m grateful that being Black and growing up Black has afforded me empathy to other cultures because of the way that my culture is treated.

I grew up hearing that being Black, and even being a dark-skinned Black person, was one of the ugliest things in the world. It was never that to me, no matter how hard people tried to convince me that it was wrong being a Black girl. It was never wrong to me. Being Black is so dope. It gave me a heart to want to know more about the world.

What does confidence mean to you?

I wasn’t always this confident. I had to learn how to build confidence over time, and having it is extremely important. I don’t like to use the word “hope” a lot, but confidence kind of equates to being hopeful because you’ve got to see it and believe it before you are “it.” It’s this thing that you have to embody.

For some people, confidence is a muscle. I was one of those kids. I was bullied, I was shy, so I had to work that muscle. And over time, it got stronger and stronger. Today, you can’t tell me nothin’. You want to walk around with your head high. You want people to believe what you are saying, what you are selling, what you are serving. And if you don’t have confidence, then your product is null and void.