From winning the Polaris Prize to becoming a target for online harassment, the Colombian-Canadian artist tells us about her highs and lows of 2017 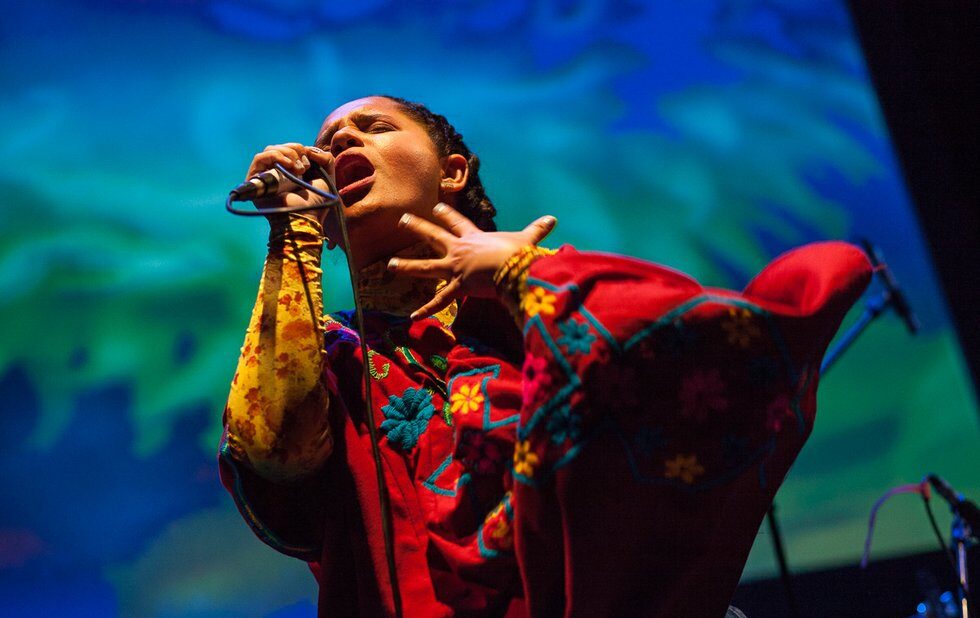 Lido Pimienta didn’t release an album in 2017, but you’d never know it from the year she had. Though La Papessa came out in 2016, its mix of lush electronic soundscapes, virtuosic singing and Spanish white supremacy-dismantling lyrics resonated in major ways throughout the year.

It doesn’t hurt that the Colombian-born, Toronto-based artist’s record won this year’s Polaris Music Prize. That’s a major feat for a totally independent release, not to mention one whose words are primarily sung in neither English nor French. She used her moment in the spotlight to speak up for immigrants, single mothers, the Anishinaabe and Haudenosaunee people on whose land the gala took place.

It’s hard to think of another artist who used the increased exposure of a Polaris Prize victory to more positive effect. As a visual artist, Pimienta exhibited at Feministry, a showcase for queer artists and a tribute to the late Holy Oak (one of many queer spaces Toronto lost this year). She also called out British artist Michael Landy, whose protest-art-based Demonstration at the Power Plant reproduced her and other artists’ work without credit, raising questions about appropriation and the importance of context in political art in a year where that mode was very trendy.

As a musician, she used her rising profile to boost laudable lineups, including the new festival of women and genderqueer artists Venus Fest, and the nation(s)wide New Constellations tour, which created community between Indigenous and non-Indigenous musicians across the country and offered mentorship and opportunity to Indigenous youth.

She also created space for racialized, trans and female fans at her shows, which made her a target for gross and unrelenting online harassment after an incident at Halifax Pop Explosion got blown out of proportion and became the alt-right tempest in a teapot of the day. (Had followers of Alex Jones or The Rebel heard of Pimienta before they ranted against her “brown girls to the front” invitation on their platforms? Doubtful.)

But the status quo is rarely shaken without resistance, and a fearless Latinx, Indigenous woman using her position at the forefront of Canadian art and politics to reshape it in positive and inclusive ways is bound to scare a few people. Especially those who stand to benefit from keeping things the way they are.

As she gears up for what’s sure to be an even bigger 2018, we asked Pimienta to reflect on her year. While on the road with New Constellations, she took some time to answer our questionnaire via email.

What was your high point of the year?

Winning the Polaris Music Prize was the highest point because my album received so much recognition in such a short period of time. La Papessa was made as a healing effort and the process of making it was really educational and therapeutic for me and those involved. I put it out digitally on Bandcamp, with no label support or physical copies. [And it’s] outside of Canada’s “two official languages,” so it was a real shock. A very proud moment indeed.

What was your low point?

The lowest point was this fall, post-HPX fiasco. I played the festival, everybody had a great time, and for a few minutes during my show someone disturbed the peace. I did not think much of it until the festival apologized to me and a “reporter” took it upon himself to report on the event without having been there, telling readers that the reason the photographer was asked to leave was because I hate white people. From that point on, a slew of online harassment followed me along with threats and horrific images, all while I was on tour trying to continue my work. The bullying was bad, but not as bad as me feeling it was all my fault, so that was my lowest point.

What was your favourite book, art and music of 2017?

I enjoyed Gucci Mane’s The Autobiography Of Gucci Mane. The book is an insightful look at the life of a man who has survived against all odds all the trials and tribulations of a Black man in the U.S.

For new music, I really enjoyed Y La Bamba, a band based out of Portland, Oregon, who have a great sound and beautiful attitude. I look forward to meeting them one day and hopefully collaborating with them.

One of my favourite art shows was One Of The Boys by Esmaa Mohamoud and Qendrim Hoti, which was exhibited at an AGO First Thursdays event. The work draws from athleticism to challenge notions of Black manhood and gender. The imagery was extremely successful and I know it inspired a demographic of people who do not usually take up any space at an institution like the AGO to go and live the art in person, not just online.

Who do you think can or should break out of Toronto next year? Why?

I am putting all my money on visual artist, performance artist and curator Jessica Patricia Kichoncho Karuhanga. JPKK has been developing a new series of videos that I know will take the art world by storm. Stay tuned @kichokaru.

I am looking forward to finishing my upcoming album, Miss Colombia, and I want to leave uncertainty and self-doubt behind.