During a fraught time in the country's history, the trans soul singer and her band the Caramelows are empowering a generation 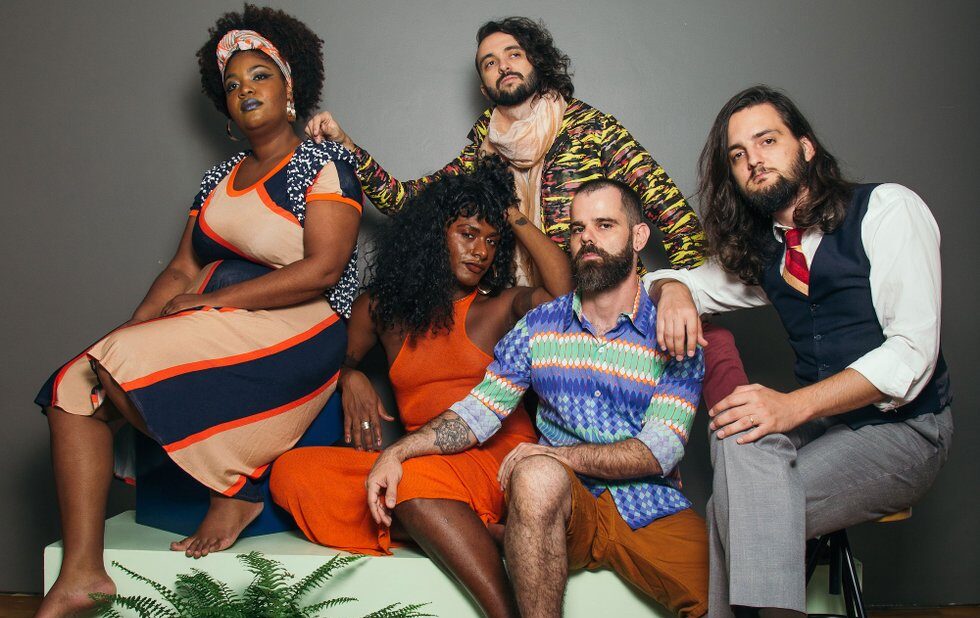 Audacious self-expression is paramount for any LGBTQ+ artist, but it takes on even more significance coming from a Black, trans singer in Brazil, which has one of the world’s highest rates of anti-trans violence.

A collective from Araraquara in the interior of São Paulo state, the band busted out with 2015’s Cru EP, with Zero clocking 1.5 million YouTube views in its first week. They followed with their crowdfunded 2016 debut album Remonta. They’ve appeared on Brazilian Netflix series 3%, Barros has performed at Rock In Rio, and the group has toured locally and internationally since SXSW 2017.

Barros’s unapologetic presence on the international stage makes a statement that can’t be ignored, with her husky voice, impeccable outfits, theatrical performance style and visible, visceral pride. But the singer/songwriter and former theatre student says it’s no stage persona. This is who she is.

“[My] visibility as a singer helps me occupy spaces that aren’t the usual ones for trans women,” she says in Portuguese. “That representation is so important. Brazil remains a very transphobic, chauvinist, racist country, with a lot of hate speech. When a trans woman takes the stage, that alone is political.”

For many Brazilians, Barros’s Black- and queer-positive message resonates deeply. In March, Marielle Franco – a Black, bisexual-identified Rio de Janeiro councilwoman from the slums – who fought for the poor and opposed police and gendered violence – was assassinated. In May, a young non-binary trans person, Matheusa Passareli, was murdered and their body burned. Jailed progressive ex-president Luiz Inácio Lula da Silva, as of press time, is a political prisoner awaiting an uncertain release and may not be able to run in the October presidential election for which he was the frontrunner. Leading far-right candidate Jair Bolsonaro, meanwhile, openly spews homophobic rhetoric.

Brazilian singer/songwriter Bruno Capinan, who’s based in Toronto and identifies as queer, says audiences outside Brazil should pay attention to Barros.

“Her music and activism have empowered a young [LGBTQ+] generation in a country that is known for being very religious and [for having] a predominantly macho culture. Liniker’s visibility is showing the world what a diverse country Brazil really is, despite the discrimination,” Capinan says. “It only encourages me even more to ensure the music industry is representative of the same diversity [as] in Brazil: Black, LGBTQ+ and visible minorities.”

“We are not asking for space instead [we are] occupying what is ours.”

Barros and her band work collectively on compositions, with members aggregating influences such as samba-rock, R&B and soul, and many Black genres like Brazilian funk. Barros has pointed to Whitney Houston as inspiration, along with artists like Nina Simone and Tim Maia, and says the band’s blend of diverse references helps create their own unique textures into a sound they call “funzy.”

One year-plus after the band’s first forays out of Brazil, Barros notes the music transcends the language barrier: wherever they perform, their liberating message gets through.

“We’ve heard from people who say that while they can’t understand everything, they really feel the music,” she says. “Our lyrics talk about love, about the freedom to love, and it’s really beautiful when we see that we manage to touch people independent of what language they speak.”

As for the Brazilians living around the world who come out to her shows, Barros says that emotion is shared between the band and the Brazilian crowds. “It’s a way for people living far from our country to connect with it in some way.”

Capinan says Barros’s visibility and that of other Brazilian LGBTQ+ artists “means we are here to stay,” and that sharing the stage here means they are reaching a wider audience.

“We are talented, driven and [we have] a platform. We are part of the industry, and on top of that we are encouraging people to embrace who they truly are.”

“[The show] being in Toronto is even more special. It will be an eccentric night… very colourful!”

Barros gives this advice to anyone unsure of what to expect at her shows: “Come with an open heart, come to dance and enjoy yourself. We’ll take care of the rest.”

Check out this playlist of Brazilian LGBTQ+ artists created by Bruno Capinan: