The Toronto singer/songwriter on the carceral system, the Appropriation Prize and booze-free shows 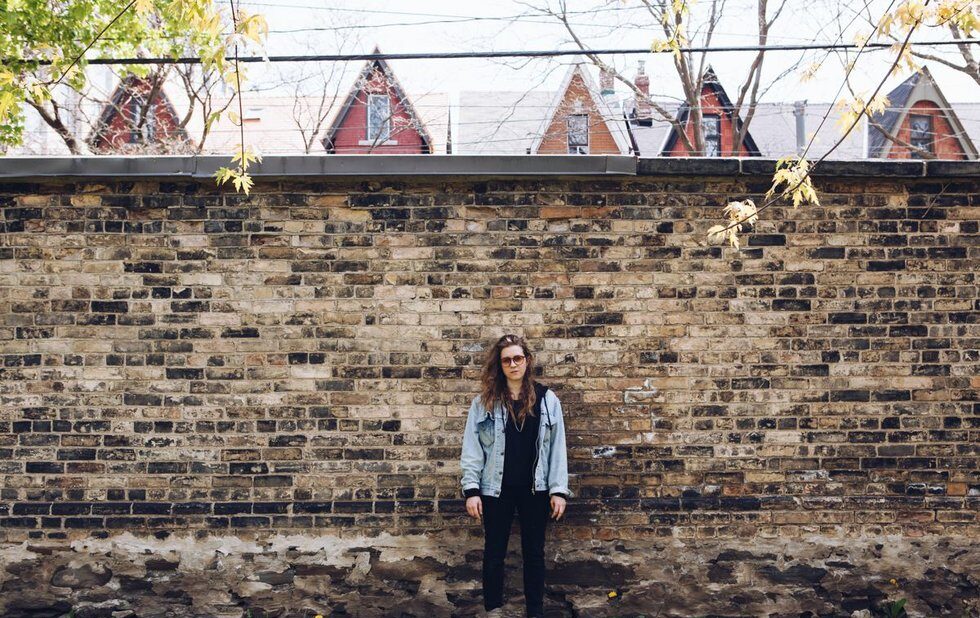 Simone Schmidt and I meet by the western edge of the CAMH grounds and walk east to the historic CAMH heritage wall, a standing reminder of a previous era’s approach to mental health.

“Toronto has managed to successfully demolish almost every building I have a relationship to, that I inhabit,” says the songwriter/guitarist/frontperson for the Highest Order and Fiver, a solo project. “The gentrification of this city and the demolition of places that I, as someone who has lived here for 33 years, feel a relationship to is severe so it was hard to think of where to go to be in a place of significance. I could pick the hill on Ellis Avenue cause it doesn’t change, you know?”

Schmidt has always been a political songwriter, but the songs on Fiver’s Audible Songs From Rockwood (newly released on Ideé Fixe) hit a particularly deep nerve. Schmidt spent three years researching patient case files, superintendents’ diaries, newspaper articles and other sources to write from the perspective of women incarcerated in the mid- to late 1800s at the Rockwood Asylum for the Criminally Insane in Kingston.

The project is an attempt to give a voice back to the voiceless. The brilliant, inventive and passionate work of historical literature is set to old-time and bluegrass-inspired music (Lonesome Ace String Band, Kristine Schmitt and others play on it) and accompanied by 30 pages of Smithsonian-style liner notes written by Simone Carver, an alias for Schmidt.

Instead of doing one big album release show, Schmidt plays four intimate, all-ages, accessible venues this week. Due to recent flooding on the Toronto Islands, Friday’s show has been moved from St. Andrew by-the-Lake to St. Matthew’s United Church on St. Clair.

What’s the significance of CAMH to you and the new album?

A lot of the women who were housed at Rockwood were transferred there from here. Joseph Workman, who ran what is now CAMH but was then the Toronto Lunatic Asylum, was very, very disgusted by the people designated “criminally insane.” When it opened in 1850, [the Toronto Lunatic Asylum] was supposed to be a state-of-the-art facility for moral therapy, but they built it pretty badly.

I read a report about the building that talked about how shit and piss were getting caught under it – the smell wafted up into the rooms – and chimneys were pushing air in. It was supposed to house only a quarter of the people it ended up housing, so it was really overcrowded.

It seems strange to think of separating people living with mental illness now when so many people are living openly with mental health issues.

I think people who are suffering with the stigma of difference are segregated by different means but also wind up in prison. So this idea that things have been deinstitutionalized and that now we have networks of different services for people with “mental illness” is true to a degree. People get lost in those networks, people get tangled up in them and then a lot of people end up incarcerated, just as they did in the 1850s. They’re criminalized for their difference and end up accessing mental healthcare in prison, in a place where they have no family and don’t have great food. I read that something like 69 per cent of women admitted into the federal prison system in 2012 were given mental healthcare while there.

Have you experienced any disadvantages with mixing music and politics?

I think to call oneself an activist is a serious undertaking: activists I know take risks, are criminalized, sacrifice a great deal of their lives – people like Zoe Dodd, Desmond Cole. While I’ve been active in grassroots racial justice, prison abolition, indigenous sovereignty and anti-poverty campaigns since I was 17, I don’t use my musical platform to polemicize specifically for any of those campaigns, because I’m not their spokesperson. Especially now, when people are using politics to brand themselves – everyone’s Instagram bio says “activist.” I refuse that and let the work I do in both music and politics affect what it will. I always write politically because I think about politics – it’s how I understand the world.

So, yeah, the Highest Order just raised $3,000 for the End Immigration Detention Centre because we don’t believe in detaining people indefinitely without charge. A decade ago, it was uncool to write about politics, and in [my former band] One Hundred Dollars, I had to write about politics impeccably, sneak it into country form. Now people talk about the idea of politics more than they do its substance. Audible Songs From Rockwood obviously comes from the impulse to scrutinize the roots of carceral systems in settler colonial society, to challenge the ways that Canada has historically labeled people “criminal” and “insane.”  You could find a political idea on every one of the 30 pages of liner notes.

The album features the Lonesome Ace String Band, Kristine Schmitt, Cris Derksen and Alia O’Brien. Did Fiver’s sound evolve in a more traditional/acoustic direction alongside your research for this project?

Fiver is a place where I can do whatever I want – it’s not a bid to move into a certain genre. I like to produce records. I like to enhance the sound of a song by being choosy about the sounds I’m using in production. Fiver allows me to do that. I’m always writing folk or country tunes. But I would love to make a disco record with Fiver, and I probably will.

In a recent interview with the CBC you said you had first tried to inhabit the characters through journalizing them and then writing a song from that perspective but that maybe it didn’t work out. How did you determine which women to write about?

If a detail really struck me, usually an image that I knew would stand well in song, then I wrote a story around that. I’d write the journal of the character, and if that voice felt strong, then she’d have a song, but if it didn’t or if her song was disgusting to hear or sing…. Not just disgusting in a conventional sense. I mean, aesthetically, too. Like there’s some very bad songwriters at Rockwood. They wouldn’t have made the recording. These are the most gifted ones.

You researched not just the women who are on the album but a lot of women in similar circumstances. Were any of your characters composites?

Yeah, the song Carry On Warm is about a woman who gave a fake name, Ida Bye, and I thought she would be a good liar. And her lie became a composite of all these different conditions that were really common, like working in the workhouse or doing sex work or getting thrown out by your master or being subjected to the hatred of your master’s wife. Things like this were common. I drew them all into her song.

Yeah, I mean it’s like poverty now, too, right? That’s what it really comes down to for a lot of people who are… poor. I don’t think the practice of throwing people who are quite personally exhibiting the pain of the world into warehouses has ended. No matter what progress we think we see here [at CAMH, in Toronto], the prison system is only growing. 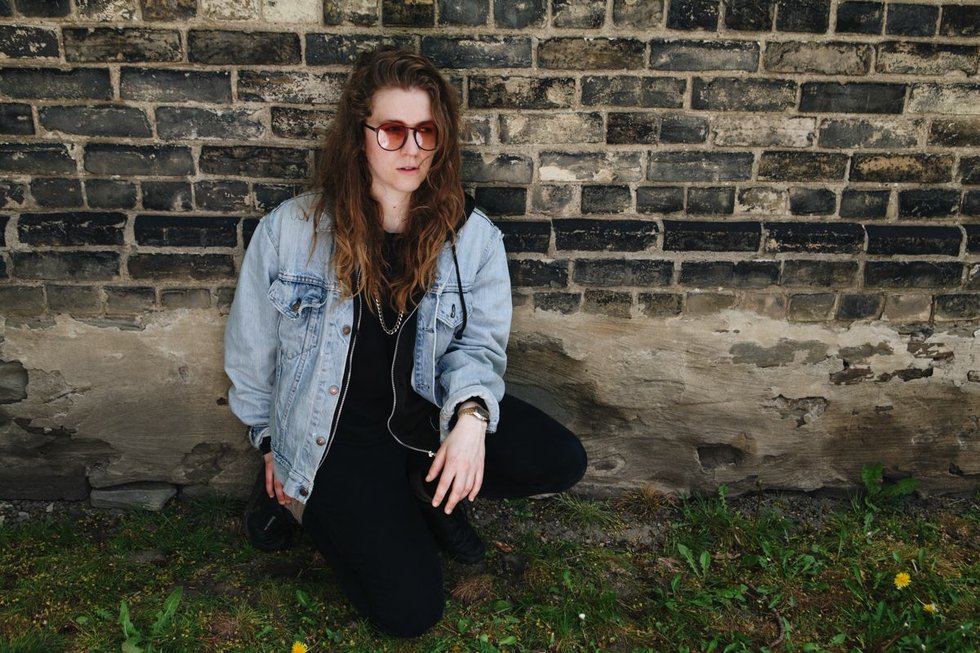 Were there any Indigenous women at Rockwood in the time period you were researching?

Not that I could find. I cover that a bit in the liner notes. I was looking, but for the most part in that area there were Methodist missions that a lot of the Indigenous women probably would have been in. That was a way the colonial government was controlling the Indigenous population. But I don’t think that means there weren’t any, I just think they might not be identified as such.

In Kingston at that time there was a big Haudenosaunee presence. Molly Brant, who was Mohawk, had a great influence under the British Imperial government. If you were Mississauga that would look different. Those things are complex. You want to make sure when you are doing this work that you don’t erase those questions that they are varied and many and not easy to sum up.

If someone were writing about our time a hundred years from now would our records be similarly incomplete?

Imagine that we get to a point where Pan-Indigeneity is no longer accepted. Where it is important to name everyone’s nation.

Yeah, then you’d think would those statistics be available in the ledgers of the Kingston pen?

You and I grew up in the same school system here in Toronto. I don’t remember learning much Indigenous history at all.

I don’t remember learning whose land we’re on right now. You know what’s a great book, if you haven’t checked it out: Indigenous Writes, by Chelsea Vowel.

What about the Appropriation Prize controversy that’s been happening?

The amount of Indigenous brilliance that you see regularly if you just pay attention – the stronghold that I see in music, it obviously must exist in literature.

I think RPM is really pushing hard for their artists, and there has always been the segregated Aboriginal awards at the Junos that don’t get as much play. Music and power is so weird. Culture and power is so fucked. And representation is strange. Cause representation always verges on tokenism if there’s no big structural shifts that are allowing people to be writing.

The deeper conversation that I think we refuse to talk about in music are the things that set up people not to be represented. I’m interested in this idea that music has become the domain of the upper-middle-class because wages are so low and so many people’s parents pay for their careers, so if you’re not coming from the upper-middle-class, how do you take all the time that you need to be a musician? How do you navigate the granting system? If you can’t move to Toronto? Those are the larger questions that sometimes conversations about representation mask or detract from.

On top of being all ages and accessible, what did you consider when you booked your local album release shows?

I like to keep these shows small only because I feel like the material could use a kind of intimacy. And I also like the idea of people only coming to watch one hour of music. To be with the material and value it. There’s also no alcohol served at these shows, so that if people find it hard to go out around alcohol they can go.

And if people find it hard to go around without alcohol than they can deal?

They can brown bag it like they always have if they need to.