Could there ever be another Massey Hall?

As the venue undergoes a massive renovation, what can we learn from its history? 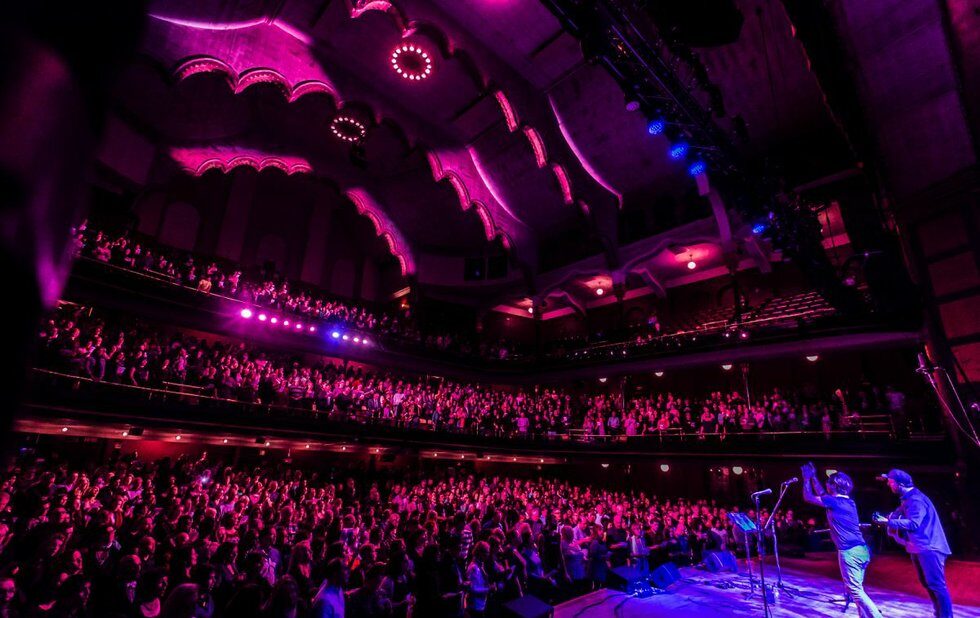 Wandering around Massey Hall, you can see why it inspires such awe in both concertgoers and performers. The space is majestic from anywhere in the room. Onstage you can see almost every seat, inspiring an intimate connection with the audience.

During Shining A Light On Massey Hall, a November 12 history talk and tour hosted by Toronto’s collaborative museum organization Myseum, York University professor and ethnomusicologist Rob Bowman let slip what many concertgoers are thinking: “Part of me wishes they wouldn’t renovate because I’m scared they’ll fuck it up – but I’m sure the architects will do a good job.”

Yet when it’s not crowded, you can see its flaws: accessibility issues, holes in the stairwell walls, a lattice-work of wire preventing the hall’s ceiling plaster from falling, and backstage dressing rooms that can at best be described as modest.

It needs some TLC. The Massey Hall Revitalization team led by Deane Cameron, president and CEO of the Corporation of Massey Hall and Roy Thomson Hall, is midway through a seven-year, $139-million-dollar spruce-up that will force the hall to close in July 2018. It won’t re-open until September 2020.

Cameron offers plenty of reassurances that the renovations are in good hands. He describes how the hall’s ceiling will be repaired using the same type of plaster from 1894 so as to not affect the acoustics, and how the hall’s original stained glass windows will be restored.

“The day we started to take the stained glass windows out, some of which have been covered for 90 years, we all had lumps in our throats,” Cameron says. 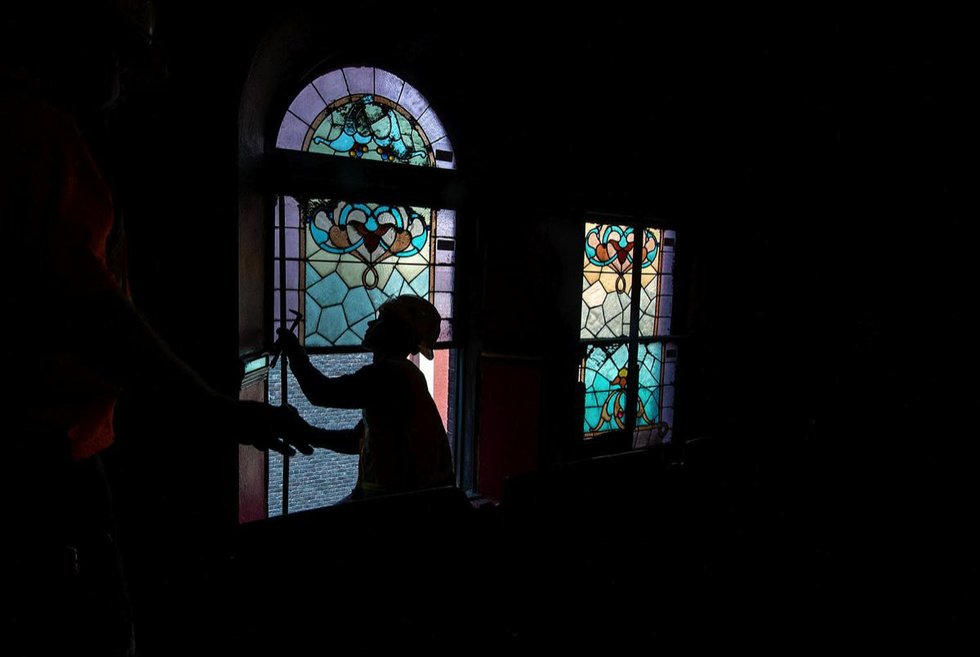 How did Massey Hall, which was built by businessman Hart Massey, who Bowman describes as “notoriously stingy,” become so enshrined in the city’s music scene? And can it happen again?

Bowman’s talk illuminated part of that, as he described how the space – used by Enrico Caruso, Oscar Peterson, Glenn Gould, Bob Dylan, Joni Mitchell, Kraftwerk, Lou Reed, Prince, Jackie Shane, Neil Young and Nick Cave, to name a few – was purpose-built as a music hall, and meant to be for everyone. It was never meant to be posh.

Massey Hall is a storied venue, but it’s only one part of a rich Toronto music history that is constantly being rediscovered.

Myseum has organized a series of events (17 in total) called Music From People City, which launched at Massey Hall on November 10 and runs to January 12. It also includes a pop-up record shop at TIFF Bell Lightbox, a tour through the music history of Kensington Market, and a discussion of quintessential dance clubs.

Ed Conroy, a cultural historian who curated Music From People City (and who runs the online video archive Retrontario), says there’s value in looking back: “When people talk about Toronto as a music city, it’s always through the prism of [already established artists] Drake or the Weeknd. Are we happy to have a few hit-makers who are global properties, or should we look to the past and see the lessons for younger people who want to get into the music world?”

A look back reveals Massey Hall was threatened with demolition in the 60s until the city designated it as a heritage property in 1973. Vanishing venues is an issue today’s venue owners, managers and promoters are trying to fight, and the music scene is looking for help from the city now, too.

That was the topic at the Live Music Industry Forum at Lula Lounge on November 13, hosted by the Toronto Music Advisory Council’s subcommittee on venue protection. Venue owners, managers and promoters discussed long-term policy work to address property tax rates and improve the infrastructure of our night-time economy, as well as smaller steps, like ensuring bands loading in gear aren’t ticketed.

“Massey Hall is about far more than the bricks and mortar it’s the 123 years of history inside those walls that make it exceptional,” says Jesse Kumagai, who co-chairs the TMAC committee and is also director for programming, marketing and business development for Massey Hall and Roy Thomson Hall.

Working to protect existing venues so they’ll be around for years to come doesn’t mean we can’t have new ones, too. “It’s absolutely possible to open a new venue in Toronto, but doing so requires a lot of effort, resources and determination,” Kumagai says. “We need for it to be easier, and that’s the message we’re sending to City Hall.”

Kumagai points out that two new smaller concert venues are part of Massey Hall’s revitalization plans, so the venue is investing in heritage and the future at the same time.

That will open the hall to more than just already established legends, which returns it to its original populist position while also grandfathering a couple of accessible stages into a Yonge-adjacent area that was once a hotbed for live music. 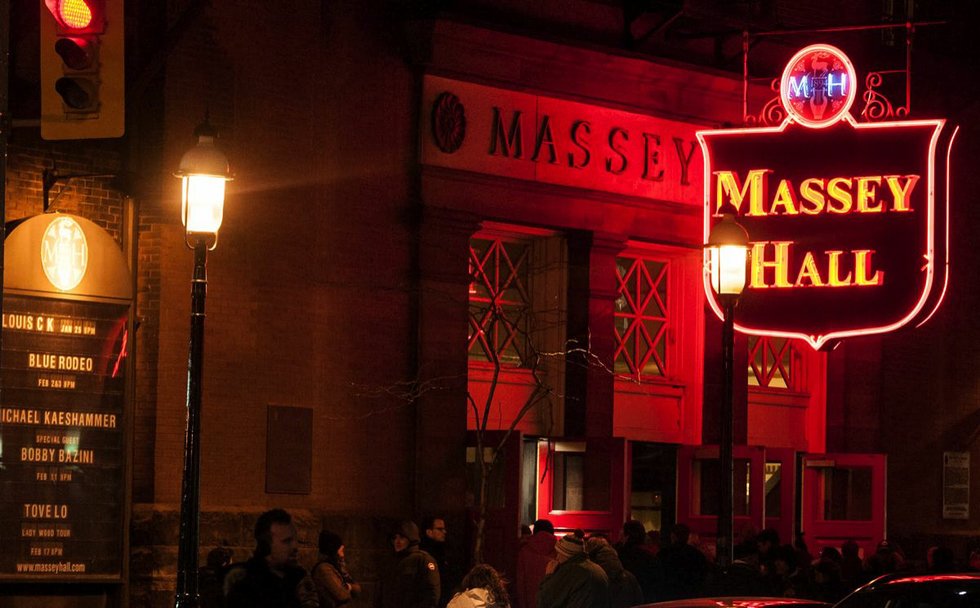 But the main stage hasn’t lost its benchmark status for many Toronto musicians, like Weaves, who opened for Tune-Yards at Massey during NXNE 2014. “It was amazing,” says the band’s singer Jasmyn Burke. “Daunting, but an accomplishment.”

Everyone who plays Massey Hall, however, still needs a place to start.

“There used to be tons of venues and rent was reasonable so I found making music was more fun and community-based whereas now everyone is hustling,” says Burke. “I wish there were still small venues and little shows with less pressure to sell tickets.”