The landmark 124-year-old venue is about to close for a massive $142-million renovation. Here's what you can expect when it reopens in 2020 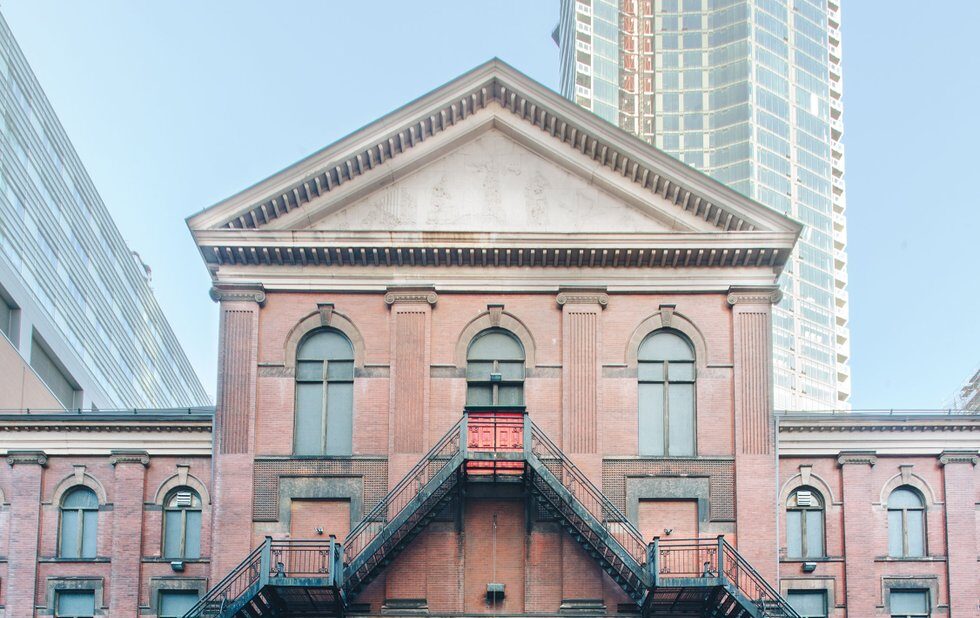 Looking down at a Massey Hall light fixture from above

When Hart Massey built Massey Hall in 1894 he couldn’t have imagined how his decisions would be scrutinized 124 years later. The venue is showing its age, not to mention the coats of paint and elbow grease splattered to extend its life every few years. Instead of half measures, the owners are now giving the venue a full-scale $142-million renovation, designed by KPMB Architects, and they’re taking it seriously – updating what needs to be updated, while burrowing down to figure out what makes it Massey Hall in the first place.

Director of programming Jesse Kumagai took us on a tour, through every nook and cranny, explaining what’s changing and what’s staying the same. Consider this the “before.” We’ll get the “after” in 2020.

(There’s a new tower being built as an addition, which will bring along two new venues for emerging acts, plus condos. Here, we mostly stuck to what we can currently see with our own lens.)

It’s hard to think of Massey Hall without picturing its signature red-and-black palette, but if you look carefully it’s actually pretty chaotic. The colour scheme wasn’t introduced until 1948, and “there’s probably been every version and shade of red there is in here,” says Kumagai. There’s been an investigation to peel back the layers of paint to pinpoint the exact right shade of Massey Hall Red – something akin to oxblood. 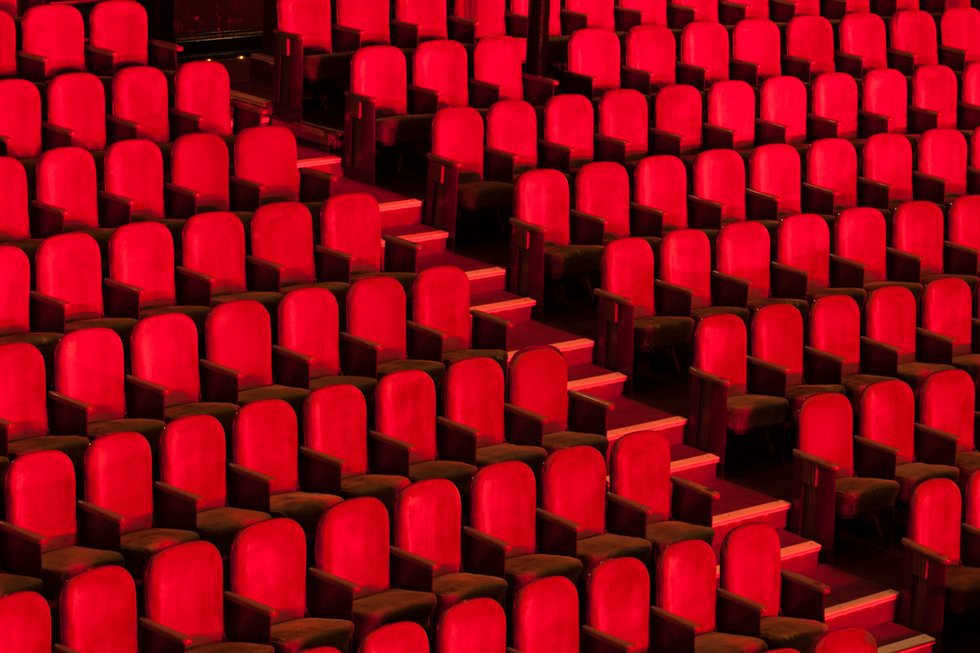 All three floors of seating are getting restored, and some of the seats are for sale for $1000 a pop.

The perimeter of the main floor will be raised to improve sightlines, while the seats in the centre will become retractable, using a mechanical system to slide them under the stage and back on rails. So, like Danforth Music Hall, the room will be transformable, allowing for more general admission hip-hop, dance and punk shows.

The orchestra level in the first balcony will be completely reseated from the 1948 upholstered seats. The seats in the top gallery date back to 1894. The wood is not worth salvaging for service purposes, and so the framed seat-backs are also for sale. With the original iron frames intact, the new seats will have new wood and added cushioning for comfort. The best news: more leg room. 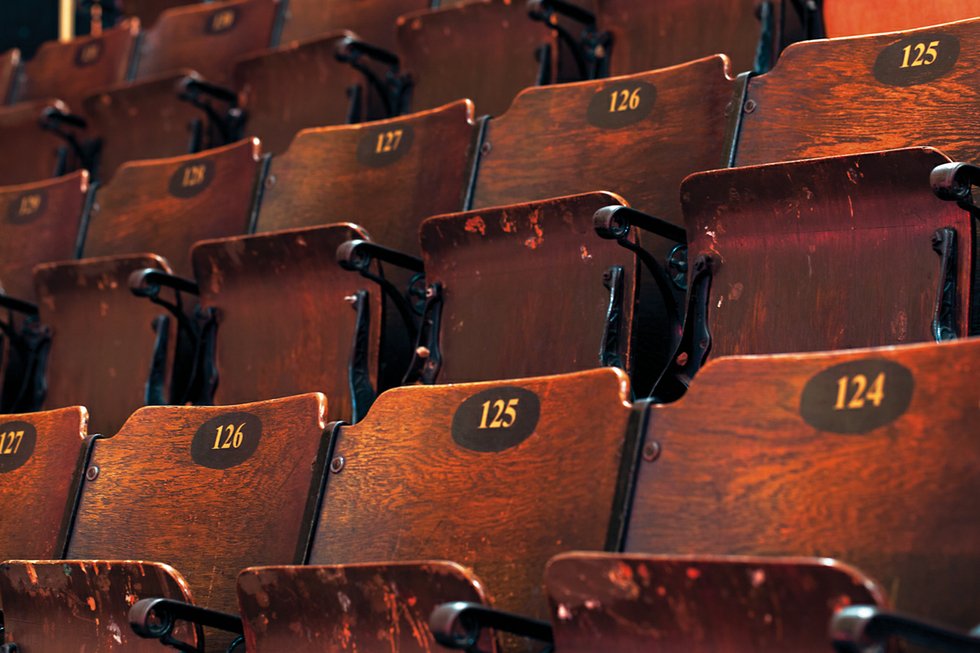 There were once about 100 of these all over the building, and the fact that they’ve been hidden for more than 80 years feels like a bit of an injustice. When the venue first opened, they would let street noise and natural light in all over the building, which, as Toronto modernized, became harder to justify. So at some point they were boarded over before being excavated about eight months ago. When Massey reopens there will be better insulation for temperature, noise isolation and the ability to black them out. But they’ll be back somewhere near their original glory. 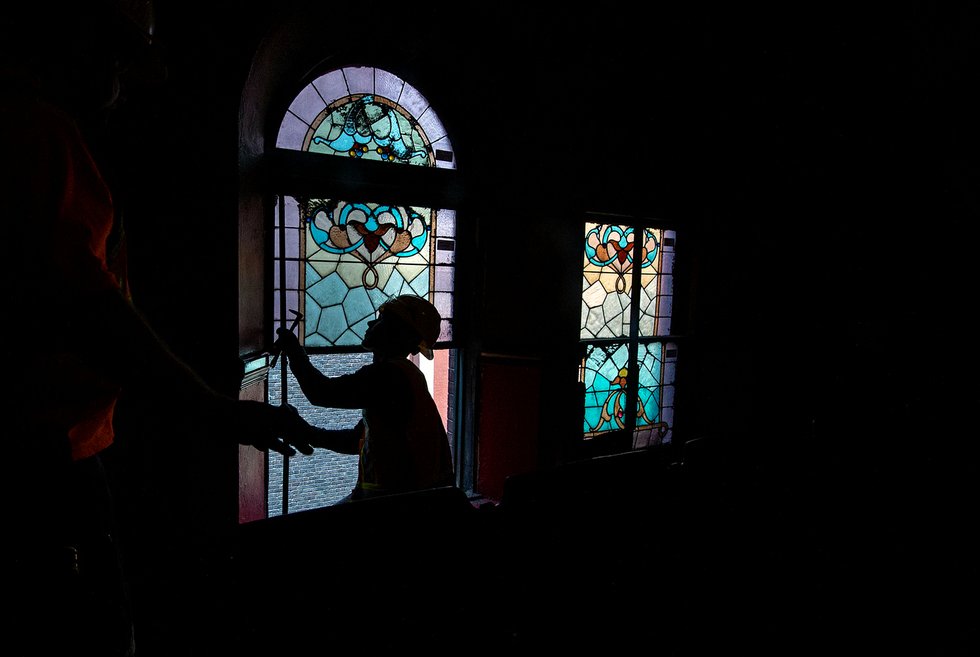 Though seldom seen by patrons, this spooky, creaky compartment will play a big role in what kinds of shows can take place at the new Massey. (It’s also where you come to change light bulbs from above the big circular lighting fixtures, and looking down at the venue through the cracks is quite a trip.) Currently, a lot of big-spectacle touring shows are turned away because there’s no room to accommodate gear beyond Massey’s in-house PA and lighting. Rigging in the attic, and especially a new dedicated load-in area outside (something the venue has never had), will increase flexibility. 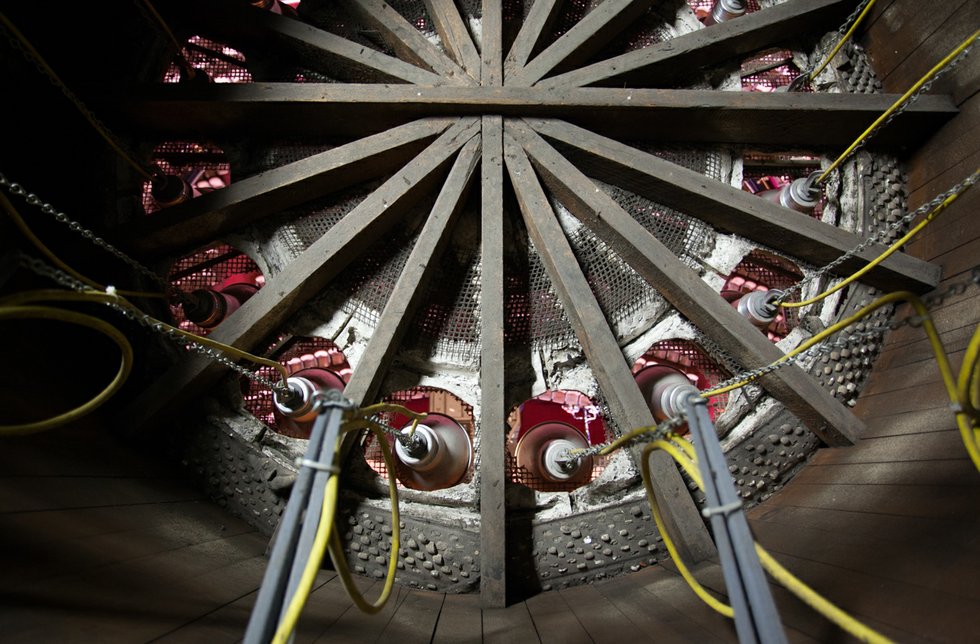 Here’s something you probably never knew: that’s not the original stage. The current one was put in in 1948, and the lighter-coloured wood stain is typical of venues used for orchestras. But since the Toronto Symphony Orchestra moved to Roy Thomson Hall in 1982, the restoration is going to darken it back up again. Hopefully the stage, which has been signed by legends like Chick Corea, Buffy Sainte-Marie and Herbie Hancock (below), will get some new autographs in 2020, too. 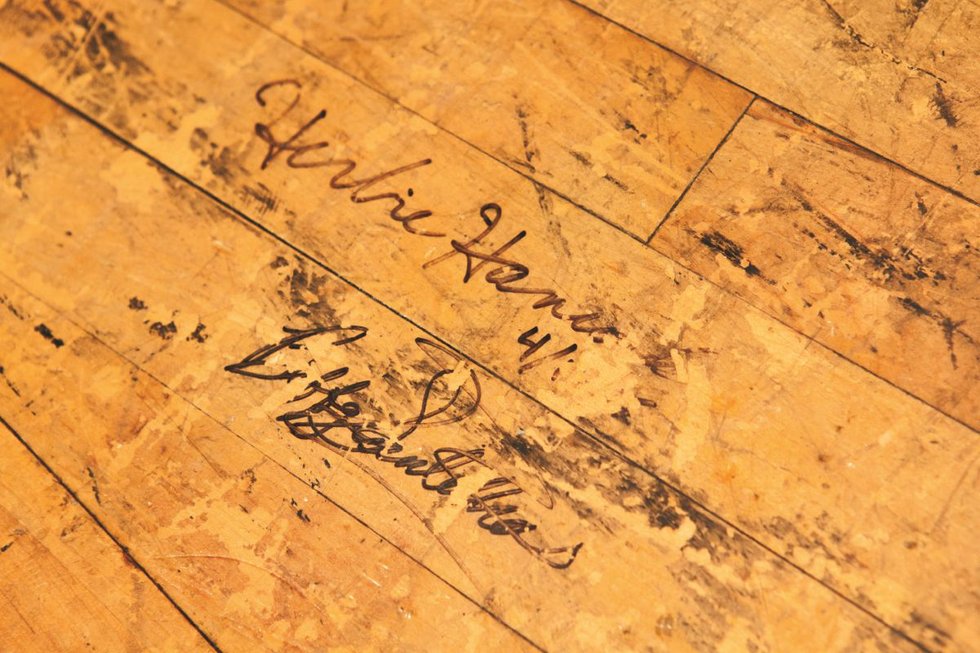 Bad news: one thing that won’t change is the obstructed seating created by the pillars throughout the venue. There will be subtle adjustments to limit the obstruction, but the pillars aren’t moving. “The bottom line is they’re holding the building up,” says Kumagai. 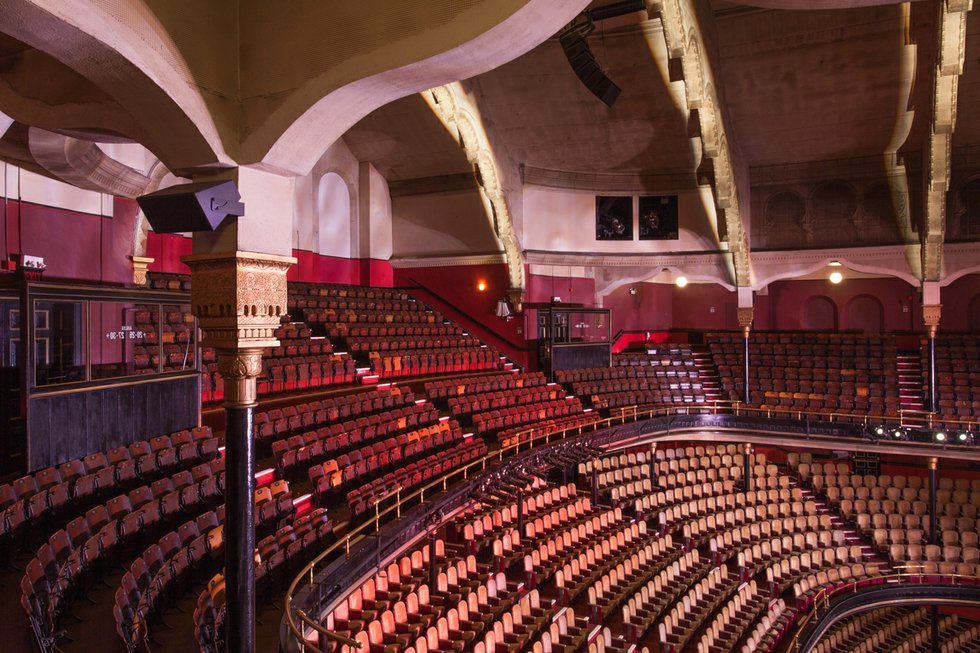 Musicians and fans talk about the acoustics of the room in hushed tones, often ascribing it to some ineffable magic, but the restorers are more scientific than sentimental. Kumagai says they’ve brought in some of the most renowned acousticians in the world to measure specifically what gives it that character. The hall wasn’t initially designed for amplified music, yet that accounts for “99 per cent of what happens here,” he says. Sound often reflects back at the stage from angles like the flat wall at the back of the venue, the dome above the stage and the flat portions of the arches. All will get sound treatments, and the new seat bottoms will be perforated to trap some of the sound in the cushion itself. 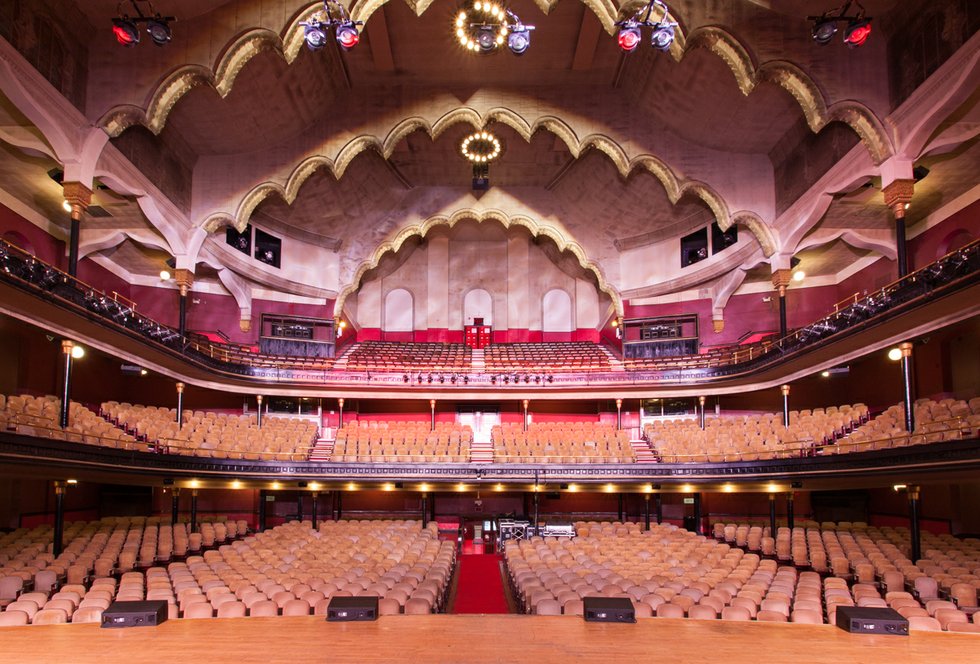 When you first step onstage and take in the grandeur of the venue, the arched ceiling is one of the first things you gasp at. But it’s been in disrepair for a long time, haphazardly held together by mesh wire that routinely flakes pieces off. Each of the points coming down once had minute stalactite-like detail that will be brought back to life. 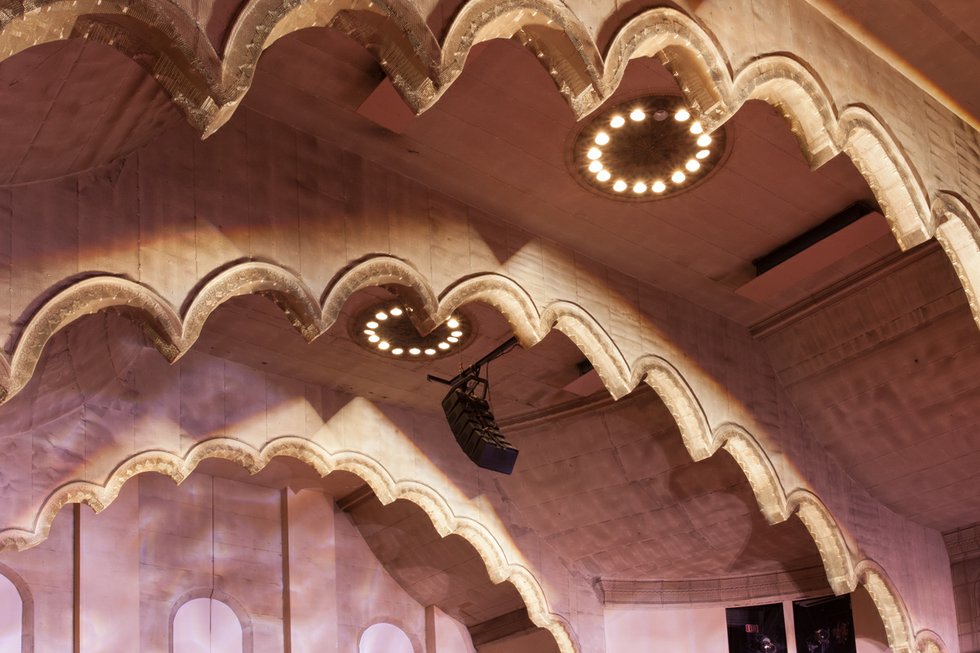 This is the big one. Right now there’s only one lift up to the orchestra level, and the balcony has no accessibility for people with disabilities. New elevators will be built to service every level, and the auditorium on the second and third levels, complete with new accessible seating, will connect into the new conjoined Massey Hall tower through glass corridors on the outside of the building. Similarly, there will be bars and bathrooms built on every level to avoid having to travel down into the basement. 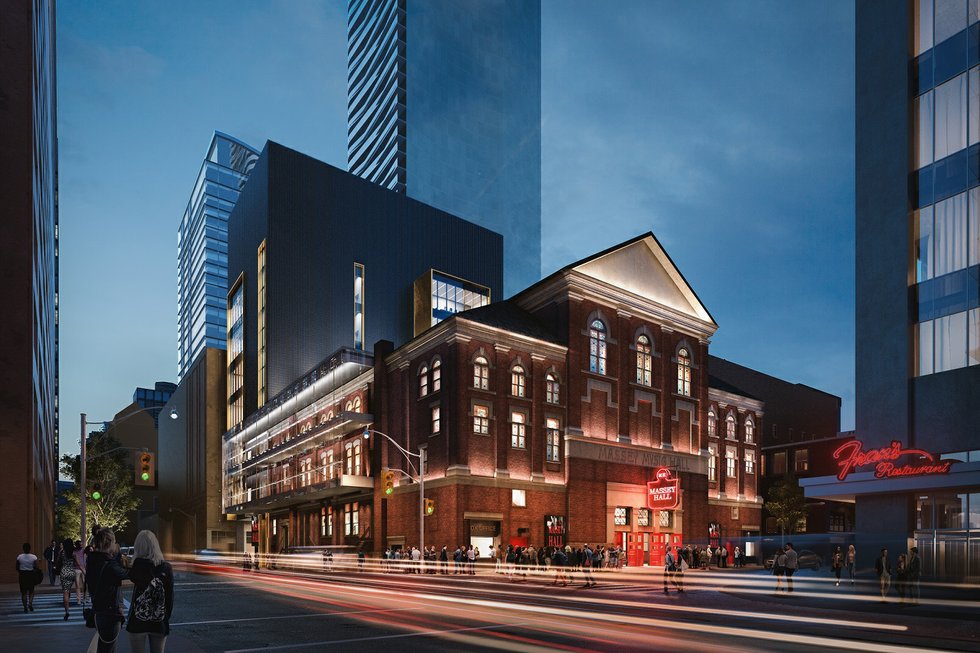 A rendering of the new Massey Hall with the Massey Tower

The basement bar, which debuted in 1994 on the 100th anniversary of the venue and saw the venue licensed to sell alcohol for the first time, has been known to host an after-party or two in which someone jumps up on the little stage to keep the music going. The new version will get full staging capabilities so proper shows can happen down there.

If you look carefully at the outside of the building, you’ll see the etchings of the words “Massey Music Hall,” which have been butchered by the addition of windows and balconies. Not that you’d ever mistake the venue for something else, but expect to see that facade detailing return in 2020. 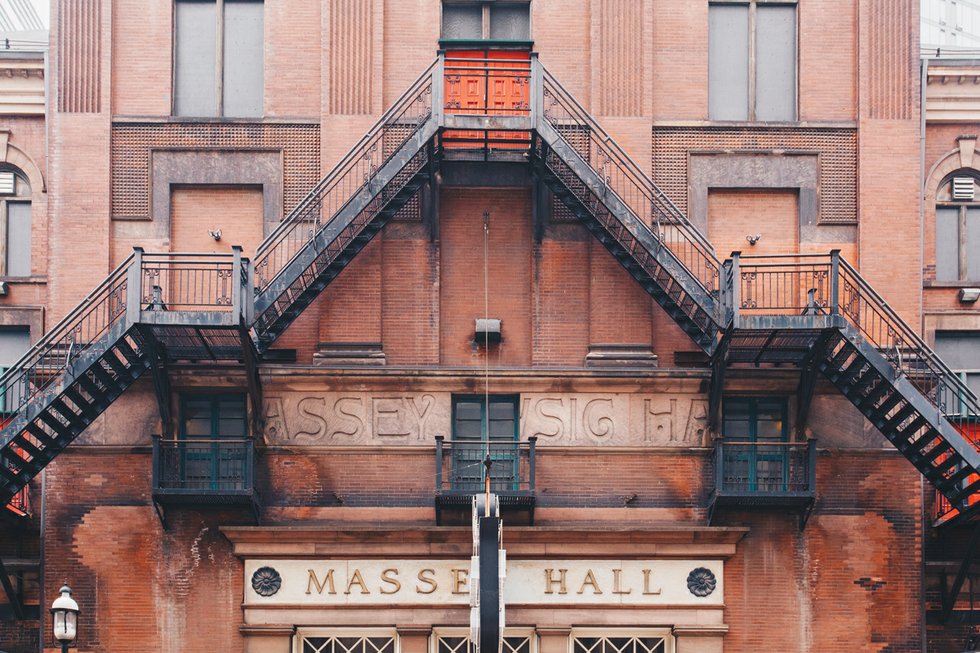