NOW MagazineMusicFeaturesMaylee Todd welcomes us into her Virtual Womb headquarters

Maylee Todd welcomes us into her Virtual Womb headquarters 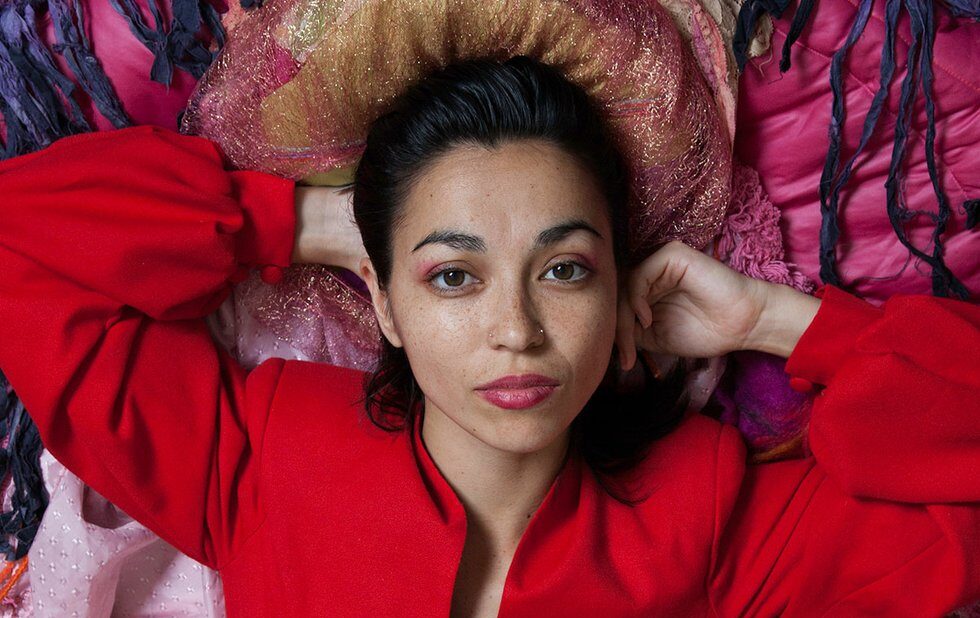 Maylee Todd sits in the sun-lit back room of a charming Toronto home she’s crashing at during a “homeless” phase. Her background singers are arriving. Her arranger is organizing music sheets. And one of her costumes, a fragile birch-white piece accented with dyed acorns, lies across the worktable.

“We’ll see what happens in terms of movement,” she says, gazing at it intently.

It’s the day after the release of the Toronto musician and multidisciplinary artist’s third album, Acts Of Love (Do Right Music). The self-produced “bedroom” album is a delicious, seductive 17-track ride that would fit alongside work by Donna Summer, Jessy Lanza and Evy Jane. It cements her as a fearless artist of depth, willing to go beyond love song clichés to explore the psychology and even genetic disposition of what makes relationships unique.

“[My] other albums were kind of pointing fingers, blaming,” she says. “This is more introspective. Me outing my bullshit. Letting go. Not being too judgmental. Being more of an observer.”

The musing and mantras of Acts Of Love cover a lot of territory, from reflecting on addictions (One Of These Days), to heartbreak (That’s All I’ll Do), to a psilocybin mushroom trip that terrified her with visions of aging and death until she surrendered to it (Homegurl). Todd delves deep, emerging with stunning sound treasures.

“I’m not concerned [about] making something extremely cohesive,” she admits.

It’s discovery, not perfection, that intrigues her. Todd has learned new skills for each album: the harp for 2010’s Choose Your Own Adventure, arranging for 2013’s Escapology, and digital recording and sequencing software Ableton for Acts Of Love.

She says her goals for the album were “to make music that I like and express these themes as eloquently as I can via the lyrics.”

But she acknowledges a certain rawness in all of her work.

“There are a lot of lip smacks on the record,” she admits with a grin. “I’m a pretty saliva-y person. You throw a good, close mic on that and it’s juicy. I invite people to have a drinking game where they do a shot every time they hear a lip smack.”

AOL’s visual companion is Virtual Womb, which Todd created in tandem with the album alongside her “production company” of long-time collaborators: composer La-nai Gabriel, choreographer Diana Reyes and visual artist Roxanne Ignatius. She describes it as a “musical planetarium,” encompassing ceiling projections, live feeds, dancers and performance art. Audience members are encouraged to bring blankets and experience the show as if in a womb (as well as jot down their acts of love on sheets of paper).

One aspect of Virtual Womb is proving controversial.

The entrance is a vulva installation, and some of Todd’s fans, men and women, are uncomfortable with it.

“It’s like, ‘Well, I didn’t really want to come to your show because I didn’t want to walk into a vulva,’” she says of the feedback. “And some men have said, ‘I can’t follow you any more because of your Instagram vulva pics.’”

Todd shrugs, acknowledging that people’s discomfort has nothing to do with her or the space she’s created.

“I was going to either [have people] walk into a vulva or into an ear and go into the mind of someone,” she explains. “The mind is riddled with ego, identity and all sorts of things that have benefits and detriments. [In] the womb, nothing has been defined yet. Experience hasn’t been defined. I’m interested in inner space, inner-inner space, deep space, outer space. These dark spaces are always fascinating.”

An hour into our afternoon, the centerpiece makes an appearance. Todd hangs the 6-foot vulva, constructed by Ignatius, at the entrance of the living room. It’s surprisingly realistic, with fabric in nuanced hues. It’s also practical, doubling as a sleeping bag, the clitoris a perfect place to rest your head. Once the virtual vulva goes up, it’s time to get down – down, deep and intimate with the music.

Todd’s talents are as limitless as her curiosity. She’s done Funny Or Die-type comedy sketches, healing arts and empowerment workshops, “sound bath therapy” and 3-D projection mapping. Where she’s going next is a mystery.

An instrumental album is on her radar, and working with Thundercat and Hiatus Kaiyote is on her wish list.

“I’m looking forward to wandering the earth in solitude,” concludes Todd, “then returning to create more.”