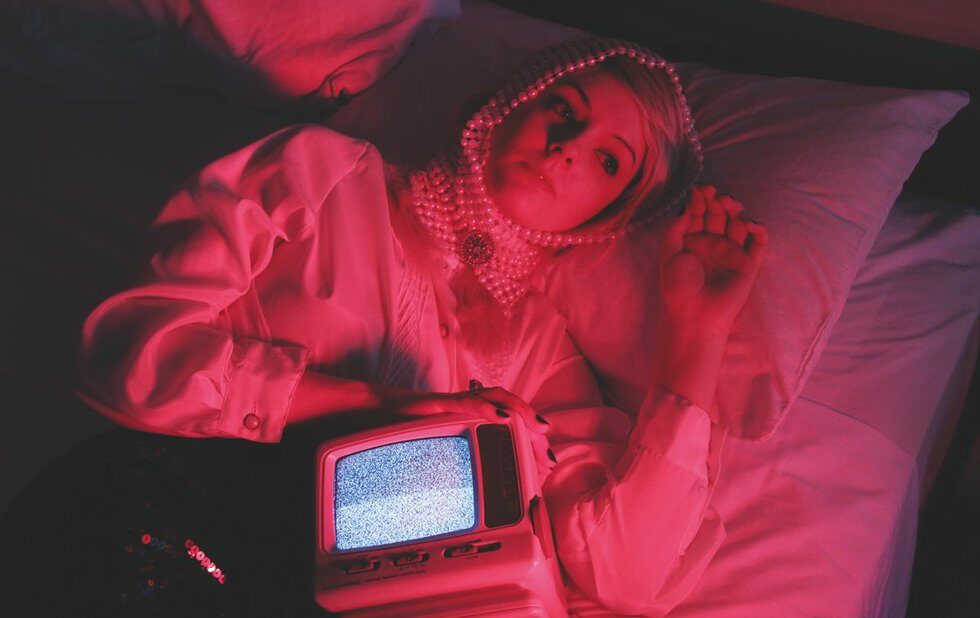 I don’t know if Toronto is facing a mental health crisis, but do know I am. And I know I often feel overwhelmed by how many of my peers are, too.

In 2015, after over a decade of struggling with an extreme panic disorder and other accompanying diagnoses while attempting to navigate a mental health system that at times seemed comically ill-constructed, I started a comedy series about my experiences called Drone Therapy, combining therapy with drone music.

Though Drone Therapy’s themes are often brutal (depression, suicide, domestic abuse), I half-desperately branded the performance art project a comedy series because I needed a refuge from the stress of attempting, as a broke artist with no private insurance, to heal my damaged mind in a labyrinth-like mental health system where I often felt I was experiencing more trauma and distress than I would have if I just stayed home suffering in silence.

OHIP doesn’t cover therapists unless they’re medical doctors, leaving the overwhelming majority of therapy out of reach to me financially. When I started Drone Therapy, I was in a dizzying free fall from one understaffed, sometimes undertrained office to the next: a crisis hotline providing a number for a discounted student therapist here, a sympathetic doctor helping me obtain a referral to this or that free six- or 12-week program there.

Mental health options in Ontario seem to be disseminated via word of mouth, and barely anyone was talking. I started hoarding phone numbers, even of places that had burned me, so I had something I could pass on to friends who were struggling. 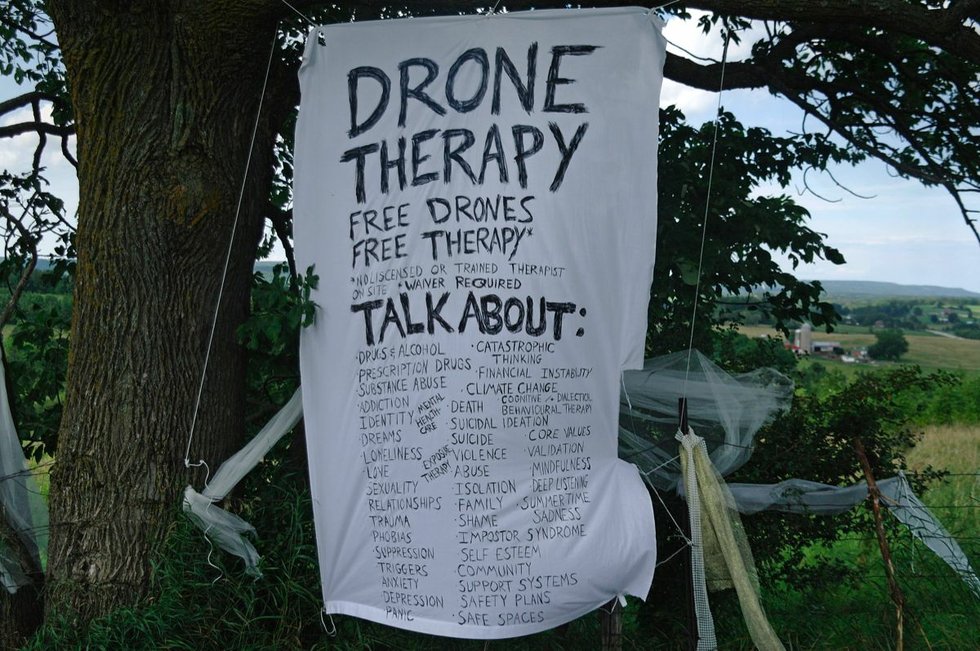 It was after I started Drone Therapy that I realized how many of my peers were struggling. Especially in Toronto’s music and arts communities.

I had ignored my own increasingly dangerous and debilitating mental health issues for far too long: I was an artist, and artists are supposed to be fucked up, right?

My peers and I didn’t only turn a blind eye to each other’s craziness, we often enabled or even encouraged it.

Drone Therapy changed this for me. The more I spoke openly about my experiences with mental illness both online and offline, the more my peers – people I knew, and total strangers – shared their own struggles with me and asked for help. Eventually my hoarded list of phone numbers for Toronto’s free or cheap therapy resources became a page-long PDF called Drone Therapy Handbook (now two full pages long and available online and at my shows).

My unique view into the mental health of my peers expanded alongside Drone Therapy. I’ve taken the project to live events and music festivals, including my current interactive performance piece Brigitte Bardon’t Presents Drone Therapy, where (after “patients” sign waivers noting that I’m not a mental health professional) I offer counselling on topics from relationships to suicidal ideation. I’ll be at Workman Arts – a non-profit organization supporting artists with mental illness and addiction issues – presenting it as part of this month’s Long Winter.

In December, I launched Drone Therapy as a podcast to share coping mechanisms, anecdotes, commiseration and whatever I could with a public I perceived as desperately in need.

That perception isn’t just projection. Last week a young girl I’ve never met messaged me about wanting to kill herself.

“It’s jus [sic] so difficult sometimes….” she wrote. “I’ve been struggling w a lot of these things for years… i can’t deal w this I don’t know what to do 🙁 the only coping mechanisms I have are self destructive.”

She wanted my advice on the depressive side effects of prescription drug withdrawal, which as an artist I’m not licensed to dispatch but as a human being recovering from a benzo habit I know too much about. I suggested, with a flurry of heart and rose emojis, she exercise caution, and be patient and kind to herself.

I’m not going to say this wasn’t a difficult message to receive – I’m not yet desensitized to hearing details of my peers’ paralyzing mental health issues or personal traumas, and I hope I never am – but it’s a typical message for my inbox now. I get a few people reaching out to me like this each week, sometimes a few people in one day. Often people I don’t know personally, sometimes people I do.

Viewing emotional labour as part of my art practice helps me cope with the strain of performing it, but I shouldn’t be in this position.

A community’s poor mental health is more than an indicator of unhappiness – it’s a symptom of poor living conditions: poverty, instability, weak or nonexistent support systems.

Toronto is facing growing opioid overdose and homelessness crises. Displacement and precarity, including the ongoing issue of venue and studio closures, bring mental health issues with them. As developers scramble to make attractive living spaces available to a relatively affluent influx population drawn to life in the city, our poor, including much of our creative class, face increasing barriers to health and hope.

I often have to remind myself that I can’t fix a community, and that while solutions can come from the grassroots initiatives, it’s the people at the top who hold the power. As a struggling community stretches its resources, mobilizes and attempts to make its needs heard, there are people on the ground struggling in the meantime.

I’m one of those people. I’ve graduated from many of Toronto’s limited counselling programs. Despite witnessing my extreme situation, institution after institution has told me my time is up, good luck out there. Toronto’s own so-called Artists’ Health Alliance told me that long-term care for mental health under OHIP is an impossibility. In December I found a long-term private therapist who agreed to see me for about a fourth of her normal rate – generous, but still beyond my means.

The reach of the Drone Therapy podcast has allowed me to crowdfund my own therapy, which also helps me collect resources and offer support for others who are struggling. I’m beyond grateful, but this reality where an artist must crowdfund her recovery should be shocking. Despite my exhaustion, my repeated disappointments, my lowered expectations, I’m not too tired to feel outrage.

My question is, why? Why aren’t systems in place to catch us when we struggle with mental health? To lift us up? With elections looming and rents rising as high as condo buildings, I hope someone at the top is listening.

Kristel Jax, aka Brigitte Bardon’t, is a multidisciplinary artist and freelance writer based in Toronto. Drone Therapy podcast is available on iTunes and Soundcloud.