Nardwuar breaks down his best and worst interview moments 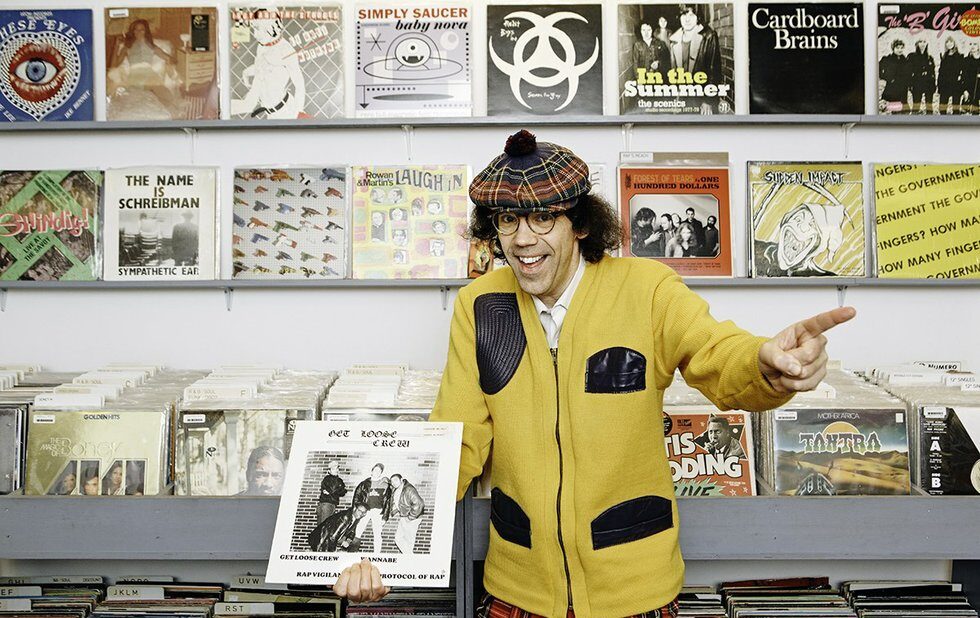 For the last 30 years, Canadian institution and punk rock journalist Nardwuar the Human Serviette has entertained music fans with his inimitable exuberant style of grilling interviewees with the most frighteningly thorough research. Known for giving rare gifts and his “doot doola doot doo” catchphrase, he’s interviewed everyone from Nirvana and Iggy Pop to Jay-Z and Jean Chrétien, all of which you can view on his website.

This week Nardwuar takes his Video Vault show on the road for three nights at the Drake Hotel in celebration of his 30th anniversary. He’ll play videos of his interviews, talk about them, and perform with The Evaporators (featuring Sloan’s Chris Murphy on drums).

“So you’ll get me playing vids, me talking and me playing music,” Nardwuar says. “The complete package! There’s nothing more I can do.”

We spoke to him about his legendary career of boggling some of music’s most famous minds.

Art Bergmann of the band Poisoned on September 26, 1985. I was president of the student council and I thought I should film and document the year, and that was part of the year. The reason why I chose them to play the dance was [because] before they were called Poisoned they were called the Young Canadians. Art thanked my high school on his record, and I had the video camera, so I interviewed him!

People love to bring up Snoop Doggy Dogg. I would say that’s the number one, probably because I’ve talked to him [so many times] since the year 2000. So there are lots of generations who have seen me interact with Snoop Dogg.

There are quite a few interviews that don’t go so well or are just completely unmemorable. But obviously there is the interview where [the drummer from] Blur harassed me. That was pretty offensive.

The wild thing about that is the internet never forgets. That dude, Dave Rowntree, later ran for Parliament in England, so he was forced to issue an apology to me eight years later, only because some kid posted a link to our interview on an internet message board. He said he was on cocaine at the time, so he blamed it on the cocaine.

The person who did it the best didn’t actually do it. When I went to James Brown and said, “Doot doola doot doo,” he went, “I’m not gonna go ‘A-wop-bop-a-loo-bop-a-wop-bam-boom!’ And then his backup dancers went, ‘Doot doo!’ He turned to them and said, ‘Are you gonna be that good tonight?’ That was amazing. I love that he did it his own way.

And of course, there’s the Courtney Love response: “Fuck you!” As long as it’s rhythmic, I’m happy.

The one I remember the most is the one Sonic Youth destroyed.

That happened in 1991 and thankfully in 1997 I found another copy. It was a rare, local obscurity. It was like breaking an Ugly Ducklings record when you’re in Toronto.

The time Nardwuar received a gift

When Pharrell Williams interviewed me, he turned it around and gave me cheese. I love cheese!

The most difficult interviews to get

The last time I talked to Snoop Dogg was at South By Southwest this year. I had to wave my hat in this giant conference room to get his attention and then we met backstage. I spoke to his people beforehand and they said, “No! Snoop will not talk to you!”

It’s almost embarrassing! Here I am sitting on the sidewalk all dejected and people are asking me what I’m doing and I say, “I’m waiting for Kendrick!”

So why am I still doing it? Because I have lots to learn!