Ahead of his appearance on The Launch, the musical impresario talks about collaborating with legends, Executive Realness and his unassailable work ethic 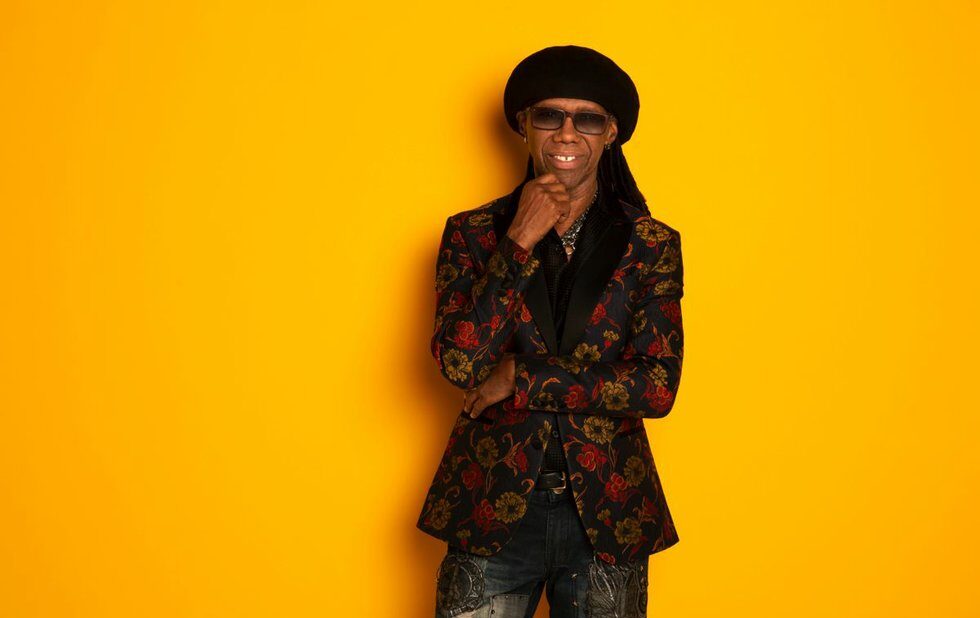 NILE RODGERS & CHIC appearing on season two of The Launch, premiering Wednesday (January 30) at 8 pm on CTV and opening for Cher on April 22 at Scotiabank Arena (40 Bay), 8 pm. $112 and up. ticketmaster.ca.

The American music impresario briefly flew to Toronto last fall to film the season finale of CTV reality music competition show The Launch, acting as a celebrity mentor for the artists on the episode airing March 6. He also did interviews to promote his band Chic’s first album in 26 years, It’s About Time.

But before my allotted 20 minutes begins, he must upload an Instagram video congratulating British R&B star Nao – the latest on his endless list of pop collaborators that spans Diana Ross to Lady Gaga – on her new album in time for a launch party six hours ahead in London.

“Hold on a sec,” he says. We sit in silence for a solid five minutes. When he’s done, I have a hard time getting a word in edgewise.

It’s hard to encapsulate Rodgers’s impact and oeuvre. A guitarist, composer and arranger, he has produced some of the biggest pop albums of all time – Madonna’s Like A Virgin, David Bowie’s Let’s Dance, Diana Ross’s Diana – and his sparkling guitar riffs with Chic and Sister Sledge came to define the Studio 54 disco era. Hits like He’s The Greatest Dancer and My Forbidden Lover are still played in clubs today, usually re-edited to emphasize the late Bernard Edwards’s elastic bass lines and Rodgers sprawling orchestrations.

It’s About Time is the opposite of a mind-melding dance-floor journey: a concise and cheery collection of songs that filter pool-party rhythms and New Jack Swing through modern pop beats. Nao, Gaga, Craig David and Elton John are on the guest list.

“I mean this with utmost sincerity: this is the most self-indulgent Chic album ever,” he says. “I don’t have Bernard Edwards to say, ‘Don’t do that.’ I could just say, ‘I want to do this song with this person for fun.’ I want to save the more political messages [for another time]. We’ve had them all along, but we had hidden them well.”

Rodgers is gregarious. Even though he’s recounted stories from the Studio 54 era umpteen times – his memoir, Le Freak, came out seven years ago he appears in the Studio 54 doc that came out last year – he practically glows when recalling the first time he heard a continuously mixed DJ set. And he remembers the set list: Donna Summer’s Love To Love You Baby into Eddie Kendricks’s Girl You Need A Change Of Mind into The Village People’s San Francisco (You’ve Got Me).

“Obviously, I’m overly romantic about the Studio 54 era because it gave me my real start,” he says. “My girlfriend and I walked into this disco and you couldn’t help but notice all these different types of people: gay people, straight people and every ethnicity you could think of all dancing with each other and nobody felt uncomfortable.

“The disco thing was so alluring and so accepting – especially to us people who were snobs. We thought we were into the highest musical art form and everything else was beneath us.”

Coming from a classical, jazz and punk background, he was more used to discerning bandmates playing tricks onstage to test his playing ability than arms-in-the-air abandon. He became pigeonholed as a disco act but the scene opened his mind – and career – to so much more.

“We were not disco artists – we only claimed that after the Disco Sucks movement said to the world, ‘These guys were disco and they’re now personae non grata,’” he says. “We pretended to be something that we’re not. Bernard and I were not anything. But when it was time to play the part, we rose to the occasion. Give me the job and let me have on-the-job training. The very first star I ever wrote songs for was Diana Ross – I’m Coming Out and Upside Down. I got to do that at 20-something years old.”

He says the next Chic album, Executive Realness, will speak to that experience of double consciousness.

The title is named after the queer ball scene category that seminal documentary Paris Is Burning entered into the pop culture lexicon. He talked the title over with his friend, drag icon RuPaul, whom he spontaneously dubs the album’s co-creative director. (“That’s me just making up that title right now,” he says.)

“The first words out of his mouth almost brought me to tears. He said, ‘You know what, Nile? That concept is brilliant. I’ve always had to be the beauty and the beast my whole life,’” he recalls. “As Black people – and in his particular case as a gay man – we have to play these different roles.

“Sometimes people who are not seen as equals have to play the part they may not naturally fit. All my life I’ve had to work so hard, and it’s cool because I have a strong work ethic. But I always said, ‘Man, I work twice as hard for half as much.’ That’s just the truth.”

There was another reason the concept of executive realness – a ball category based on executive wear – resonated by the time he was hanging with NYC club scene glitterati like RuPaul and voguer Willie Ninja (via Blondie’s Debbie Harry and Chris Stein) in the 80s. The first time he met Bowie, the British music icon’s style had switched from glam alien to gentleman.

“When I first met David Bowie, he was dressed in a suit and looked nothing like all of us club kids, who were punked out or b-boy-ed out with foxtails like Grandmaster Flash,” he says. “David Bowie looked like an executive.”

Rodgers is also a bit like an executive these days, even if he doesn’t dress like one. In switching from Chic’s long-time label Atlantic to Universal, he became chief creative advisor for London’s Abbey Road Studios (where he produced a new orchestrated version of Bowie’s hit Let’s Dance). Last summer, he was appointed chairman of the Songwriters Hall of Fame, a position he plans to use to lift up women in the industry.

This year, he’s back on the road with Chic opening for Cher. A two-time cancer survivor and sober for 17 years, Rodgers had a scare in Toronto in 2017 and missed a concert for the first time in his career. While being treated for food poisoning, doctors discovered a new growth. He returned to the road and then went under the knife.

Chic’s sets are heavy on Rodgers’s biggest hits. That is very intentional.

“The path I’m trying to carve out for Chic is, ‘Always remember the fun,’” he says. “Sometimes an artist’s greatest responsibility is not to reflect the world as it is, but to dream about the world you want to have.”