The Colombian-Canadian artist won the 2017 award for her album La Papessa. Here's what else went down at the gala 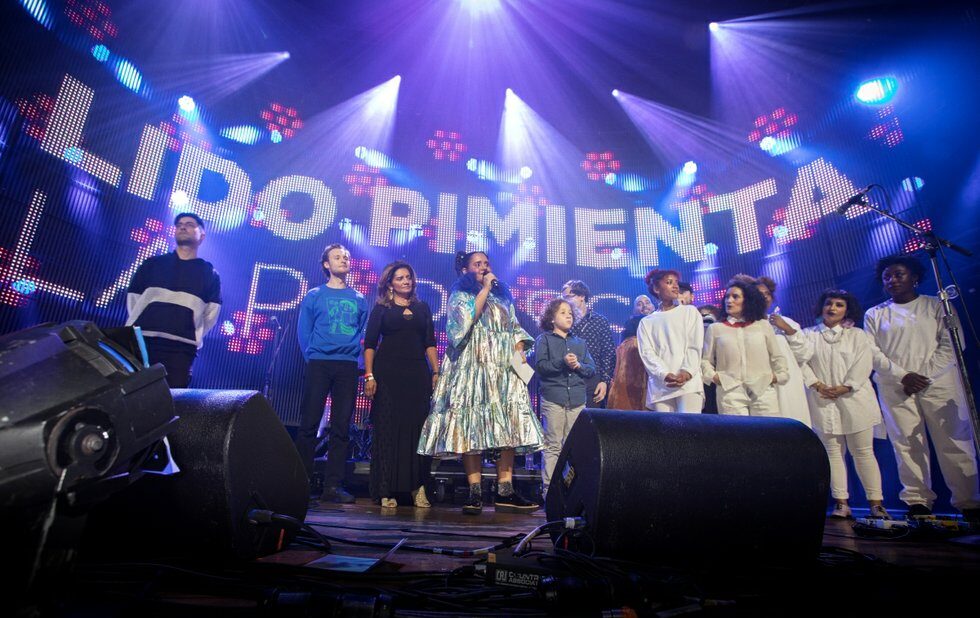 Every year, the Polaris Music Prize gala gathers a room full of journalists, artists and their handlers to announce and celebrate the best Canadian albums of the year.

There’s all the talk you’d expect when you put that many interested music people in one place: the performances, the albums worth voting for, the nature of the arts award itself. That chatter spills out into the after-party, onto Twitter and into the comment section of CBC Music’s YouTube stream. Rarely, though, after all the grilled cheese crumbs and ketchup chip dust have been swept off the Carlu floor is the discussion about the winner itself.

That’s different this year. On Monday night (September 18), Lido Pimienta was awarded the Polaris Prize and its accompanying $50,000, for her album La Papessa. It was a big surprise for many in the room, including her. “Not in English, not in French. But we’re here,” said Pimienta, along with, uh, a few other things. The next morning, her win is definitely what we’re talking about.

If you didn’t watch the event, here’s what you missed.

When last year’s winner, Kaytranada, announced Pimienta’s name as the winner of the 2017 Polaris Music Prize, the audience seemed genuinely shocked (always a welcome feeling at a stodgy arts gala). Pimienta said she had expected to be on that stage, but for A Tribe Called Red’s We Are The Halluci Nation (which she sings on) and not for her own record, so she hadn’t prepared a speech. But anyone who knows the Colombian-Canadian artist knows she doesn’t need written words in front of her to speak truth to power.

She started by calling out the “Aryan specimen” who told her to go back to her country two weeks after arriving in London, Ontario. She came onstage with her mom and her 9-year-old son, dedicated her performance to single mothers, and thanked Anishinaabe and Haudenosaunee people for allowing us to be a guest on their land. She connected her win to La Papessa’s themes of resiliency, endurance and independence. And she acknowledged the huge victory of winning Canadian critics’ top prize for an album that is not in English or French.

… and then she laid into the sound techs for failing to turn on her monitors during her performance in a short burst that probably set the record for the most f-bombs per second in a CBC broadcast. Her final “But thanks, though… motherfuckers” now stands as the most memorable Polaris moment since Tanya Tagaq said, “Fuck PETA.”

(Pimienta’s speech is below, but not that part.)

2. The performance that set her off

If Pimienta couldn’t hear herself, you’d never have known it from watching her performance. On a stage full of dancers and musicians, even a horn section, the defining moment of her set was when the music quieted and she sang unaccompanied. Her voice, high and mighty, hit notes most singers couldn’t dream of, and on a stage with nothing but monitors. You can’t blame her for demanding perfection, but she came damn near it regardless.

It takes a lot to quiet a room full of music industry networkers, and now I’ve seen Tanya Tagaq do it twice. The first was at the 2014 gala, where she played an unreal performance that is now the most watched in Polaris history. The second was at Monday’s event. With dancers, thundering drums and a theremin, her Retribution performance was already chilling, moving and heavy in all the ways her performances tend to be.

Then the music quieted, she started warbling her mournful version of Nirvana’s Rape Me, and out walked a group of women in red dresses, signifying the more than 1,000 missing and murdered Indigenous women in Canada (and the still-tepid actions taken by the federal government). Taking their spot between gala tables, slowly, they raised their fists in unison.

The performances this year were almost uniformly excellent, and most of them were from women. New Brunswick “trash folk” singer Lisa LeBlanc showed off two sides of herself, first with a thrashing bluegrass-metal tune where she rocked a triangle, and then with a sardonic solo acoustic blues tune about a long-distance relationship. Feist quieted the room with just her voice, her guitar and a lone spotlight. And Weaves’ Jasmyn Burke showed she’s evolved into a true rock star, prowling the stage with absolute confidence and charisma.

4. A classic Polaris collaboration between Weaves and Tanya Tagaq

Of all the people we’d expect to perform together, Weaves and Tanya Tagaq wouldn’t be at the top of the list, but it worked. Their song, Scream, is on Weaves’ upcoming album, Wide Open, but it still felt like a spontaneous collaboration that could have been initiated right there on that stage as Tagaq’s howls filled the spaces between Morgan Waters’s zigzag guitar line and Jasmyn Burke’s empowering lyrics about owning your supposed imperfections.

As fellow Polaris juror (and NOW contributor) Sarah Greene pointed out to me afterward, Polaris collaborations are a story in themselves. Take last year’s reciprocal collaboration between U.S. Girls and Basia Bulat, or the collaborative song between Tagaq and Buffy Sainte-Marie (a record everyone at the event walked home with in their gift bag). Polaris has also brought together Sainte-Marie with Owen Pallett, who in turn once performed at the gala with Fucked Up. That six degrees of separation has always existed in the small-seeming Canadian music scene, but it’s intensified when you put everyone in the same room together.

5. The changing conception of what makes a “Canadian album”

The Polaris Music Prize sets itself up for an endless build-up-tear-down argument on the meaning of its ultimate criterion, “artistic merit,” but it often also feels like a referendum on the meaning of Canadian music itself. If this really is the genre-blind, label-blind, affiliation-blind award, many have rightfully asked, “Why did it take until its ninth year to award the prize to an artist who isn’t white?”

That feels like it’s changing. With the last bunch of winners – Sainte-Marie, Tagaq, Kaytranada and now Pimienta – it finally feels like the Polaris Prize is inching toward being an actual representation of the vibrancy and diversity of Canada and the artists creating here. As the fully independent, label-less Pimienta has said at the Polaris and in NOW’s 2016 cover story about racism in music, being a musician in Canada for her often feels like being “the one brown girl among all these white men.” It likely still felt that way among all the industry gatekeepers in the room at Polaris, but last night at least, she was the one who came out on top.

It’s going to be exciting to see what Pimienta does with the increased exposure (and the pay cheque) that comes with being a Polaris winner, and it’ll be even more exciting to see the artists who come up influenced and inspired by her success. They might even stand where she just did.