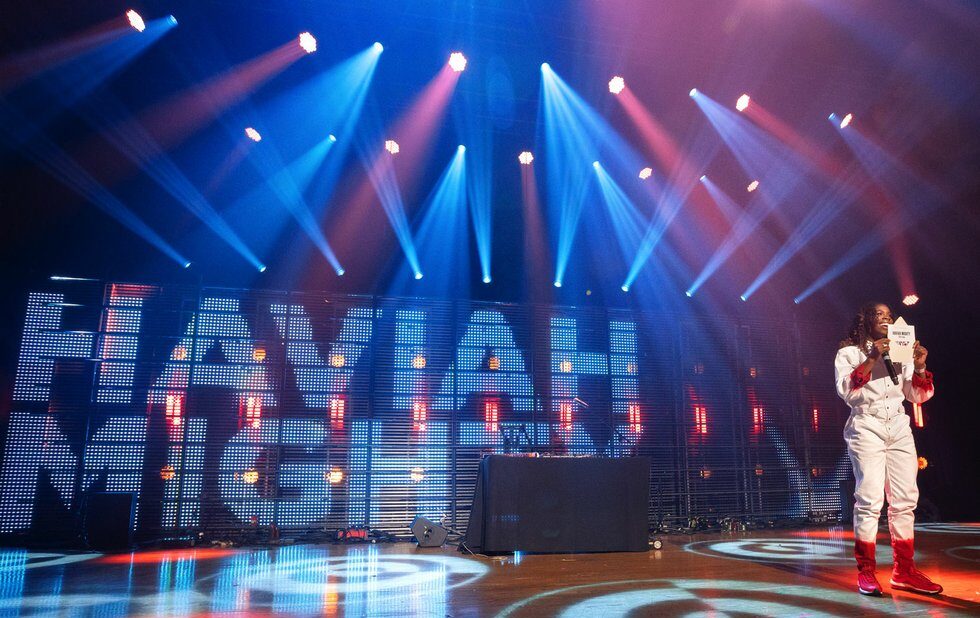 Hip-hop had a big night at the 14th annual Polaris Music Prize gala, which took over the Carlu on Monday (September 16). Journalists, broadcasters, music industry professionals and fans gathered to see who would win the $50,000 prize and the title of Canadian album of the year. That honour went to Brampton MC Haviah Mighty for her debut album 13th Floor, the first rap album to ever claim the prize. Mighty also made history as the first Black woman to win the Polaris.

But despite high energy sets from Mighty and other hip-hop nominees Shad, who brought out past winner Lido Pimienta to perform their song Magic, and Snotty Nose Rez Kids, who ended the string of performances on a high, the nearly four hour-long ceremony, which was taped for a CBC online broadcast, still felt bloated and draining for audience members.

By the time Mighty’s name was read aloud by last year’s winner Jeremy Dutcher, the entire room was on their feet – and ready to bolt to the elevators – as soon as Mighty finished her speech.

Here are five moments that made the night extra special.

Not only because Mighty won, this year felt like a celebration of solo women artists. With the exception of rapper Shad, every solo musician nominated for the short-list in 2019 was a woman. Singer/songwriters Elisapie and Dominique Fils-Aimé delivered their performances centre stage, surrounded by their bands, and Montreal techno artist Marie Davidson gave us an extended version of her single Work It without any accompaniment.

Meanwhile, nearly all the male nominees were part of bands or groups, including Quebec’s pop-rock outfit Les Louanges (which is primarily Vincent Roberge), and psych-jazz quartet FET.NAT. Their performances were strong too, but it definitely felt like independent women ruled the night.

Last year, when Dutcher accepted his award, he noted, “Canada, you are in the midst of an Indigenous renaissance.” Those words continued to be felt on the Polaris stage this year. Early on in the night, Inuk singer/songwriter Elisapie performed from her haunting folk album The Ballad Of The Runaway Girl, and the night’s final performance came from Haisla Nation hip-hop duo Snotty Nose Rez Kids, who were short-listed for a second year in a row with their stereotype-smashing Trapline. Their powerful and energetic performance included traditional First Nations dancers.

When Dutcher came on stage to announce the winner of this year’s Polaris Prize, he took a moment to shout down the leader of the People’s Party of Canada. Earlier that day, media outlets reported that Bernier had been invited to take part in the federal election leaders’ national debate. To those critical of the PPC’s anti-immigration and climate change-denying stance, this move seemed to validate Bernier’s position and provide him a platform for hate. “I can’t believe we have a leader that’s anti-immigration,” noted Dutcher on stage, before saying loudly into the mic: “Arrête, Monsieur Bernier!”

Some days it might seem like Drake is the only rapper in Canada, and that hip-hop is dominated by OVO Sound. But women MCs are undoubtedly on the rise and carving a space of their own. Haviah Mighty broke out as the youngest member of the Toronto-based hip-hop ensemble The Sorority in 2016, before dropping a solo EP Flower City in 2017. She released 13th Floor just two years later – independently, to boot – clearly showing she’s not waiting for anyone in the music industry to give her the go-ahead. Her performance, an energetic medley of songs that showed off her versatility and left everything on the stage, was a prime example.

Of course, Mighty isn’t the only woman in Canadian hip-hop paving her own way. Sydanie, LolaBunz, Tasha the Amazon and Mighty’s Sorority sisters are just a few female MCs blowing up the mic.

On 13th Floor, Mighty unapologetically raps about the challenges she faces as a Black woman in Canada. On the self-love anthem and album opener In Women Colour, she raps about the struggles she’s endured – in life and as a rapper – because of her skin colour and gender. “Those things that I’ve been marginalized for, the things that made me stand out in ways that are less than positive, are those same things I’ve found a way to become triumphant over and are now heavily representative of my brand,” Mighty told NOW in an interview earlier this year.

Mighty’s words resonate for many people of colour, as we live in a time where diversity has never been more celebrated, while racists are even more so emboldened. In the GTA, where Mighty was raised and still resides, local activist movements including Black Lives Matter continue to call out the ways in which Black folks are disproportionately oppressed. Mighty’s album packs those struggles into verses and flips them over beats. The Polaris jury listened, and now it’s time for the rest of Canada to do the same.