For its whole history, rock has been fetishizing tortured artists. With their third album, Morbid Stuff, that’s exactly what PUP want to avoid. 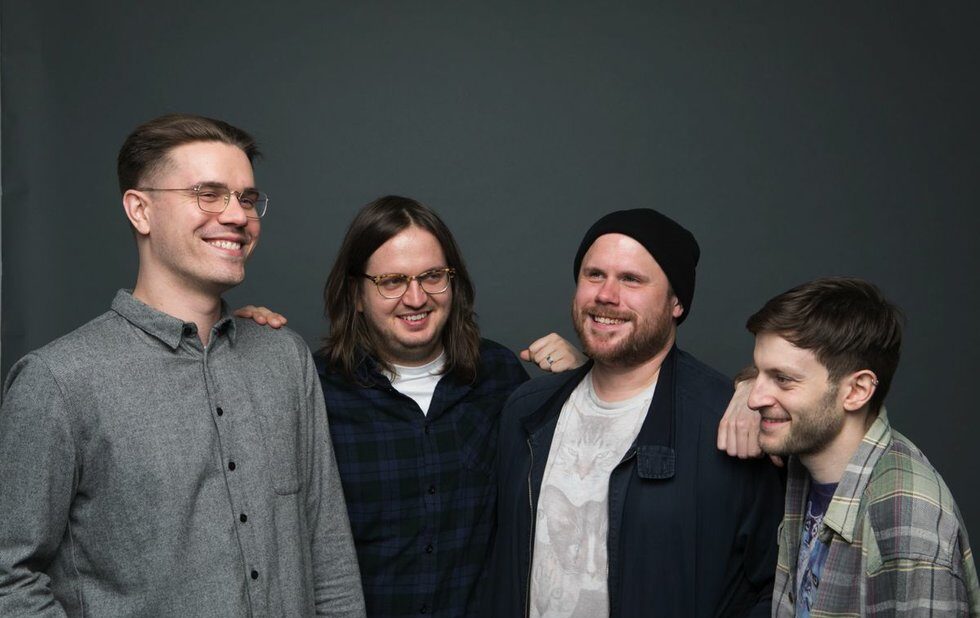 Steve Sladkowski (left), Nestor Chumak, Zack Mykula and Stefan Babcock have been playing together as PUP since 2013, but their history stretches back further.

PUP are not rock stars. At least not in the traditional sense.

Despite the heightened mythological backstory they’ve threaded through their music videos – one that starts in their childhoods and stretches through escapes, murders and choose-your-own-adventure drug trips into a techno-dystopian Black Mirror future – the band’s come-up has been pretty down-to-earth (and involves a fair bit more ska).

While Toronto’s major international breakout acts of this decade have mostly made pop, hip-hop and R&B. PUP are a rare exception – a band racking up award nominations, streaming and chart numbers, YouTube views and worldwide fans, and doing it by making scrappy punk-influenced guitar rock. This summer they’ll play their biggest hometown shows ever.

Though they have a major label partnership now, they built their success the old-fashioned way: slowly, gigging constantly and connecting directly with fans.

There’s no pedestal – fans often spend as much time onstage as lead singer Stefan Babcock spends in the crowd – and PUP’s lyrics avoid flowery sentiment and clever metaphors. That allows them to stay relatable while playing songs about issues affecting their lives without coming off as cheesy or overly earnest.

Babcock admits he became blunter and more personal after a failed experiment “trying to write lyrics that sound like lyrics.”

“My weakness is that I’m not a poet,” he says, talking over beers in Kensington Market with guitarist Steve Sladkowski, bassist Nestor Chumak and drummer Zack Mykula. “My strength is that I can pretty much say exactly what the fuck I’m feeling and thinking and have it be very clear.”

On the new album, Morbid Stuff (out April 5 on Little Dipper in partnership with Universal Music Canada), he’s thinking mostly about his depression.

There are first-person songs about dark thoughts, the restlessness of city life, the walls we put up in relationships. There are existential love songs and songs about searching for purpose in vegan grocery stores.

But it’s not dour or morose. Between the catharsis, it’s also fun and layered with caustic humour – maybe not optimistic, but realistic and almost celebratory, with songs about death and depression becoming anthems for fist-pumping and stage-diving.

“It’s about accepting the darkness and the moods and all the bullshit that comes with it and just trying to find that little pinprick of light in it,” he says. “Being able to laugh at yourself and understand that although you might be in a dark place, that can be funny sometimes, too.” 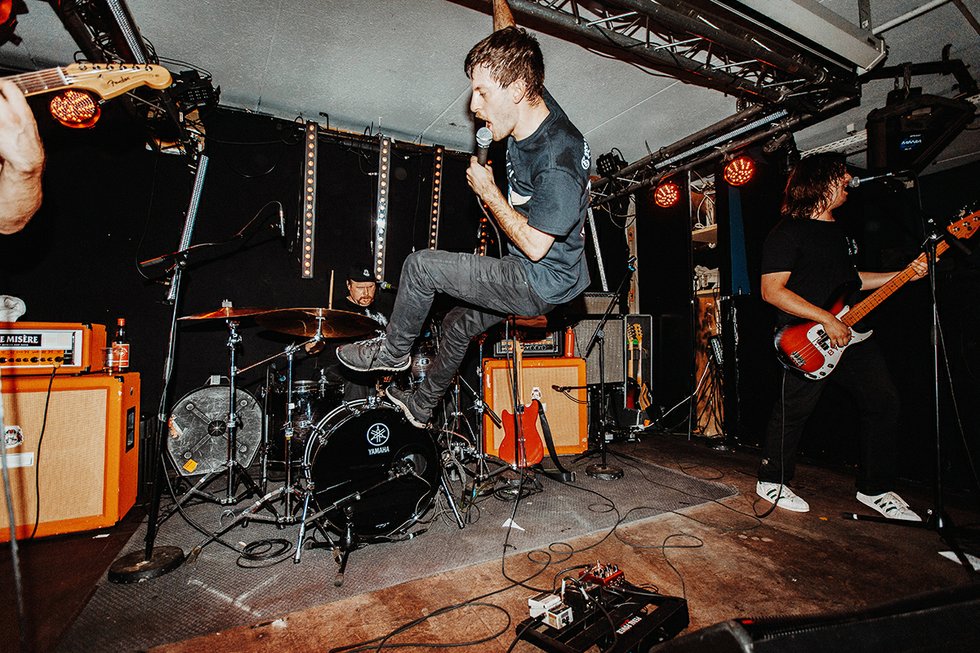 PUP in Reykjavik, Iceland in 2017. “[Morbid Stuff] is about accepting the darkness and the moods and all the bullshit that comes with it and just trying to find that little pinprick of light in it,” says Stefan Babcock.

With every album, PUP have become more brutally honest. They sang candidly on their 2016 sophomore LP, The Dream Is Over, about physical health, defiantly naming the album after the prognosis a doctor gave Babcock about his music career after he developed a cyst on his vocal cords.

Though being a musician doesn’t necessarily make a person more likely to develop mental health issues, the lifestyle and working conditions are not conducive to self-care. Precarious work means benefits – like therapy and vacation – are rare. A lack of privacy and personal space can make it harder to stay well-adjusted and take care of yourself. And resources for musicians are not widely available.

But writing frankly about mental health puts the band in a tougher position, one that requires them to be careful about how they present themselves and the songs. They don’t want mental health issues to define them, and they emphasize that their approach is just one way to work through problems, not a one-size-fits-all.

The beginning of PUP’s current trajectory came after a false start in 2013, shortly after they’d all quit their day jobs on the same day.

Then known as Topanga, the band – who all but Babcock had known each other since high school – had been building a following around the city for two years, playing every dive bar in town (including the Silver Dollar more times than they can count). They took their time honing their sound onstage and then put everything they had into recording their debut album.

Then they saw that month’s issue of Maxim: Danielle Fishel was on the cover, with the words: Hello, It’s Topanga. They had named their band after her character on Boy Meets World and now she was reprising it on the show’s reboot.

It confirmed what they’d already been thinking: they could no longer be Topanga.

“And we promptly realized that we all quit our jobs to play in a band that didn’t even have a fucking name,” says Babcock.

Instead of defeating them, though, the dilemma reinvigorated them. They had already been shifting their sound from emotive acoustic-laced early 2010s indie rock toward a heavier, more aggressive sound, something more in line with what they grew up seeing and playing as teenagers at all-ages punk shows in mostly long-gone venues like the 360 and the Reverb. 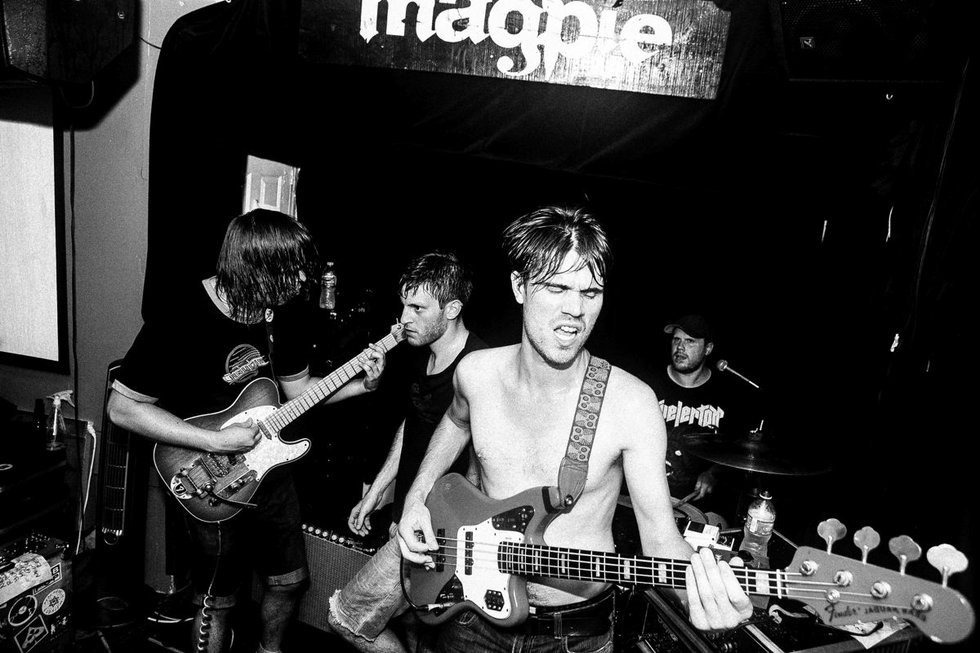 PUP’s first headlining show in 2013 at the Magpie set the tone for their trajectory – the amp literally caught fire.

They played their first headlining gig about six months later at a small Dundas West bar called the Magpie Taproom (now Dundas Video), with support from fellow scrappy Ontario rock bands the Dirty Nil and Pkew Pkew Pkew. It was the middle of a July heat wave and there was no air conditioning. Babcock’s amp literally caught fire.

“That was one of the worst and best shows ever,” reminisces Sladkowski.

A few years later they brought the same lineup to the Danforth Music Hall, playing for at least 1,000 more people.

This summer they’ll up the ante again to celebrate the release of Morbid Stuff at that same venue, with two back-to-back sold-out shows. A month later comes their biggest hometown show ever, at Echo Beach.

They’ve got all the accolades you might expect – Polaris and Prism Prize shortlists, Juno nominations, a SOCAN songwriting prize – and they’ve charted in a handful of Billboard categories with help from their view-count-racking music videos. They’ve toured relentlessly all over the world, with fans in Budapest, Kansas and Reykjavik singing along to songs about “high-fiving every shithead on Queen Street” and “doing 180 on the Don Valley Parkway.”

They even have a powerful friend in Stranger Things teen star Finn Wolfhard, whom they cast in one of his first roles as young Stefan in their video for Guilt Trip and who, in a 2017 NOW interview, called PUP one of his biggest influences. Now their Twitter is filled with members of the #FinnHive.

Their label deals ended after their last album, so they made Morbid Stuff without any plan of how to release it. Rather than sign to a new label, they formed their own, Little Dipper, which will put out the record in partnership with Universal Music Canada and Rise in the U.S. That’s allowed them to get external help as they grow, while still controlling the creative direction – like making limited-run zines and their series of music videos.

Now in their late 20s and early 30s, the members are still the same four regular dudes playing in a basement – literally. “Nestor’s like a full adult. He’s a married man with his own place but we still practise in his parents’ basement,” laughs Sladkowski.

Sometimes visiting bands will even crash with them.

“They don’t mind the attention,” Chumak answers. “My dad loves an audience.”

PUP tend not to get political in their songs, but that doesn’t mean they’re not a political band. Instead, their values show in how they use their platform.

One dollar from each pre-sale ticket for their upcoming North American and European tour went to the Trevor Project, an organization providing crisis intervention and suicide prevention services to LGBTQ2+ youth. They’ve also been vocal about sexual harassment and violence at their concerts, writing unequivocally on Instagram that those who engage in behaviour that makes anyone feel unsafe are not welcome.

“Whether it’s 30 people or 3,000, you’re creating a community,” says Babcock. “People are there because of you. It’s your responsibility to make sure they’re safe and having a good time.”

PUP have a ton of young fans – evident at their shows, the front rows filled with “young kids going rowdy,” as Babcock puts it, and in their recent video for Free At Last, where the band gave out the lyrics and chord sheet before it was released and let fans send in their own “covers.” They make it a priority to play as many all-ages shows as they can. All three of their upcoming Toronto shows are all ages.

“If a really strong all-ages scene hadn’t existed in Toronto, I would never have started playing music, and that’s true of all of us here,” says Sladkowski

A PUP show now is a lot like that PUP show at the Magpie, only bigger. It’s still no-bullshit rock songs spitting raw, throat-shredding frustration and self-deprecation over loud guitars, pounding drums and pop-punk-style gang vocals.

But their melodic directness often belies the unconventional time signatures and stop-start rhythms, and the plain-spoken lyrics speak to very real experiences of depression and anxiety. But those are often undercut with self-reflexive quips about their “little songs getting much too literal.”

“I’ll be sure to write it down when I hit rock bottom for all the people who like to fetishize problems,” goes the breakdown of the song Full Blown Meltdown. “And to tell the truth I fetishize them, too. It’s pretty messed up, isn’t it?”

The history of popular music is filled with stigmatizing conceptions of mental health that coalesce in the myth of the tortured artist. That’s exactly what PUP want to avoid.

“Artists are not a special class of people,” Babcock says, his intensity rising. “Mental health is a thing that affects so many people. And people looking up to artists who are self-serious and [who] torture themselves, that’s bad for everybody. It gives the listener or whoever the opportunity to say, ‘Oh, I can be like this, too’ and slide back into their own shell instead of doing something productive about it.”

More from this cover story: Who’s advocating for musicians’ mental health in Canada?