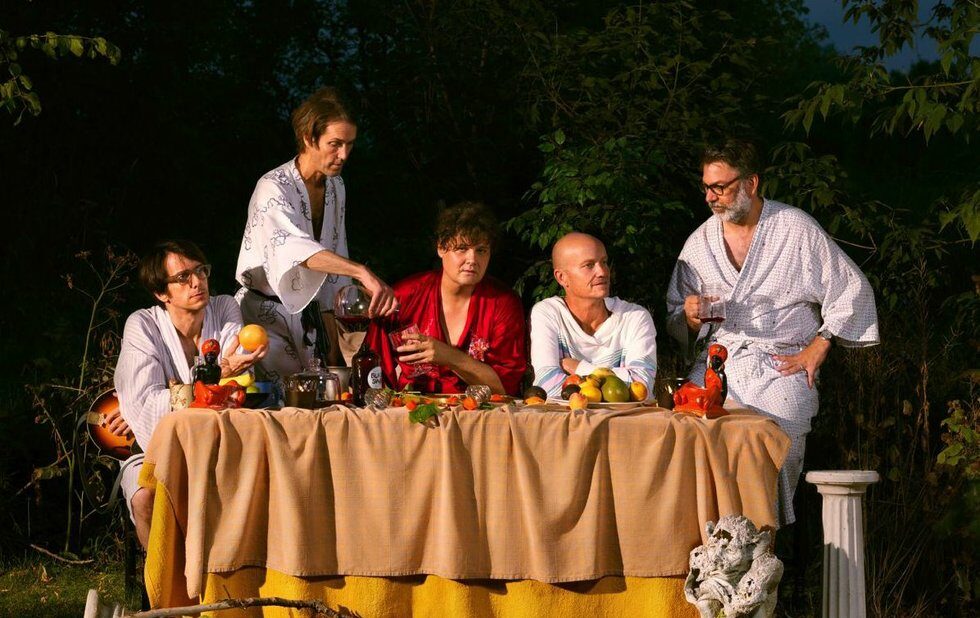 The cover art for Ron Sexsmith’s 13th album, The Last Rider, features the bard outside the Tragically Hip’s Bathouse Studio surrounded by his band members.

They include keyboardist Dave Matheson, guitarist Kevin Lacroix, bassist/banjo player Jason Mercer and drummer Don Kerr, who has played with Sexsmith for 30 years come December, the anniversary of their first gig together at the Sunwheel Courier Company Christmas party. Everyone sings backup vocals and chipped in on synths.

Why this is notable is because after two decades of acclaimed albums made with high-profile producers, The Last Rider is basically Sexsmith’s first band album. (You might count 2005’s Destination Unknown, made by Sexsmith & Kerr, or 1991’s Grand Opera Lane, credited to Sexsmith and the Uncool and produced by Bob Wiseman.)

The reasons for the band approach were many. For one, Sexsmith finally felt comfortable enough with his touring band. Kerr says things really gelled their last time out.

“I’ve never seen Ron happier. Cuz he’s not that comfortable generally, with anything,” he says with a laugh. “He’s comfortable when he’s playing guitar, singing, writing songs, but he worries about being late for flights and getting stuck in traffic.”

Secondly, they were inspired by Elton John’s band.

“There’s this golden period of about six or seven Elton John albums,” says Sexsmith. “Any of those records from 73 to 76 or 77.”

“[The Last Rider] is kind of like an epic, classic Elton John album,” adds Kerr. “There’s strings and horns and guitar solos trading back and forth.”

“We just couldn’t come up with the money for it,” says Sexsmith. “Which turned out to be a good thing. The money [Warner gave us] to make the record was generous, but Martin’s fee would have eaten up the whole thing before we even got to the studio, so Don said, ‘Well, why don’t we produce it?’ And I’ve been around producers my whole life, so I kind of know the drill.”

A feast of 15 songs (16 on the vinyl version), The Last Rider was recorded in less than a week at the Bathouse, with Kerr adding on backup vocals later. Strings were arranged and performed by Drew Jurecka and horns by Tom Richards, Rebecca Hennessy and Roslyn Black. Howie Beck mixed it.

That all makes for a very Toronto album.

Ironically, it comes at time when Sexsmith, a long-time fixture in the Toronto scene, has relocated to Stratford, where he and his wife, Colleen Hixenbaugh (By Divine Right, Colleen and Paul), recently bought a house.

“I never could have afforded it in Toronto,” says Sexsmith. “So it’s kind of surreal when I wake up. I’ve never owned anything before.

“It sort of looks like Downton Abbey. It’s far off the road, it’s got this stately driveway lined with trees on both sides. And it has this cool addition off the garage that looks like a swingin’ Burt Bacharach party room, with a fireplace and wall-to-wall carpeting. Joel Plaskett and his band were here the other night until 4 in the morning.”

Despite his excitement, he was reluctant to leave Toronto and the house that he and Colleen had rented for over a decade on Bellwoods Avenue.

“That very final day I closed the door for the last time I thought, ‘Well, I’ve written six albums in this house, turned 40, turned 50 and wrote a novel [Deer Life, due out in September through Dundurn]. That’s a lot of living in one house.’ So I got a bit emotional.”

Though Sexsmith didn’t realize it as he was writing them, some of the best songs on The Last Rider are thematically linked reflections on childhood (Breakfast Ethereal and Radio). Meanwhile, gently hand-drummed Shoreline addresses the discussions Sexsmith and Hixenbaugh were having about leaving Toronto – “I’m blown away by how personal that one is,” says Kerr – while West Gwillimbury, which started out as a bit of a joke, foreshadowed leaving the city.

“I thought it sounded like a fairy tale name and I made a mental note to write a song about it,” Sexsmith says. “As I was working on it, I just started imagining it as if it were heaven, someplace where I don’t grow old and there’s no pain and I’m on my front porch playing guitar, like, forever.”

The most poignant, beautiful song, final track Man At The Gate (1913), is based on a photograph of Trinity Bellwoods from over a century ago. Sexsmith says it’s his favourite on the album, and was Beck’s, too.

“I’m like the man at the gate a hundred years later. I was the guy standing there who’s not standing there any more, so I just started seeing it from that perspective. It’s my farewell Toronto anthem.”